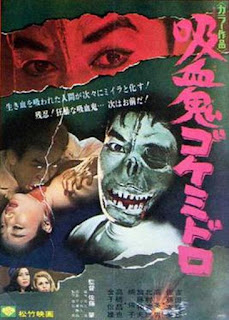 When you think of Japanese science fiction films from the 1950s and 1960s, undoubtedly images of various giant monsters take the forefront.  Toho and Daiei were the studios that dominated the market, at least for the films that (in butchered and horribly dubbed form) eventually made it to the United States.  It should be no surprise that there was more going on than just fire-breathing reptiles destroying urban centers.

Shochiko Eiga was a smaller studio that actually did have its own giant monster films (The X from Outer Space comes to mind), but also dabbled in much darker science fiction and horror.  While maybe not as much of a Saturday morning staple, some of these movies have had a major influence on later film makers, and certainly genre films in the United States.

With Goke, Body Snatcher from Hell we begin with what has got to be one of the worst flying experiences ever.  A routine flight to Osaka enters a strange atmospheric phenomena, flying through a red-tinted sky.  While the pilots and a few people on board try to figure out what is going on, the cockpit receives a report that a threat was called in and they have a suicide bomber on board.  Copilot Sugisaka (Teruo Yoshida) and flight attendant Kazumi Azakura (Tomomi Sato) begin searching the passengers' luggage, eventually finding a strange bag stowed in the galley.

Sugisaki opens it but, instead of a bomb, finds a sniper rifle belonging to an assassin (Hideo Ko) who was responsible for killing the British ambassador to Japan.  The assassin having been found out hijacks the plane.  As he does, reports come in of a UFO in the area and, as the plane changes course, said UFO buzzes it, causing the engines to go out.  The plane crash lands on what appears to be a barren, deserted island.

The pilot is killed, leaving Sugisaki and Azakura as the surviving crew.  Among the survivors is Senator Gozo Mano (Eizo Kitamura), his business associate Tokuyasu (Nobuo Koneko, his wife Noriko (Yuko Kusunoki), psychiatrist Dr. Momotake (Kazuo Kato), and American named Mrs. Neal (Kathy Horan) and "space biologist" Toshiyuki Saga (Masaya Takahashi).  One last person on board is the actual bomber, who makes a run for it shortly after the crash and is pursued, and captured, by Sugisaki.

The assassin also survives, and takes Azakura hostage.  As he is fleeing with her he runs into the UFO that crashed the plane.  Hypnotized, he is brought on board, where a blob-like creature enters through a wound slashed in his forehead.  The rest of the survivors find Azakura and, through being hypnotized my Momotake, learn what happened.  There is another fact that they find out soon enough: now that the assassin is possessed by an alien creature, it also craves human blood, and begins attacking the survivors.

Water runs low, causing Mano to become increasingly more belligerent, as he considers himself the most important person on the plane.  A slip of the tongue leads Tokuyasu, who actually threw Noriko in as part of the deal to get a defense contract for his company, to call him out.  Tokuyasu is soon killed by the alien, to Noriko's delight, but she is also captured.  Though not infested with a blob, her mind is taken over by the Gokemidoro, as the aliens call themselves, and reveals that the Earth has been targeted for invasion with the stated goal of exterminating the human race.

The alien continues to feed on the survivors it can capture, eventually pursuing Mano, who locks himself in the airplane when pursued, leaving Sugisaki and Azakura to fight the creature alone.  They manage to set the body on fire, which results in the alien leaving, entering the plane and possessing Saga instead.  In the new body, the pair are pursued, but manage to get away.  However, they are in for an even bigger surprise when they get back to civilization.

If Goke has one major flaw, it is that it tries to do way too much.  Political commentary, survivor drama, alien invasion and a vampire film are all thrown together.  Just the events at the beginning scream out that the screenwriters all had different ideas for films the studio could make and someone just decided to save money and make them all at once.

Strangely enough it works.  Sugisaki and Azakura emerge as the heroes, being the only two sensible enough to try to deal with the threat rather than fighting amongst each other.  Still, even they are distracted by everything going on to the point where they don't follow a logical path that, if there hadn't been an alien invasion going on, would have saved everyone a lot of trouble.

Performances are generally decent, even if sometimes the dialogue (if the subtitles are accurate) gets a bit hackneyed.  Yes, there are dubbed versions, but this really should be seen in its Japanese form, as the English dub (as usual) seems determined to camp things up when director Hajime Sato was trying to make a largely serious anti-war film.  It is when it really tries to drive that point home, however, is one of the major fails in the film, as Kathy Horan is one of those American actors that seems to have just been in Japan and put into a movie because they needed an American.  She managed to do a number of other sci-fi and monster films over there, but line delivery (all in English) is definitely not her strong suit.

Given the budget, the effects are pretty decent.  There is obvious miniature work used for the plane crash, but it is still among the best I have seen from the 1960s (at least it doesn't look as much like a wind-up toy as some Italian films do).  The blob entering and exiting is also a well-done and quite disturbing effect, and the deaths of those possessed by the Gokemidoro certainly influenced some scenes in Ken Russel's Altered States.  The opening scenes of the red sky are some of the most memorable in any film.

Goke, Body Snatcher from Hell is not perfect in any way, but is definitely different than many other Japanese films of the same era, and deserves a watch just for daring to be so.  While mainly promoted by Quentin Tarantino, much of the film has silently crept into genre film making in the United States and Europe.