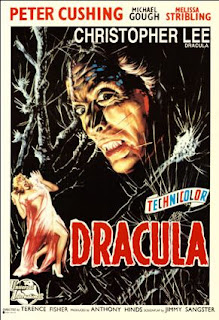 If you think reboots are anything new, then think again.  Universal had played out its monsters by the mid 1940s, relegating them to things encountered by comedians Abbott and Costello.  The advent of television kept them in the public consciousness as the old movies got played to fill time.  Also, more importantly, the Hayes Code, and enforcement of it, began to fade.

One studio that took advantage of the changing times was a British company called Hammer.  Hammer had been making films for over a decade when they suddenly struck gold with rebooting the old Universal horror franchises, largely with the participation of Peter Cushing and Christopher Lee.  They were successful enough to stretch both their Frankenstein and Dracula series from the late 1950s into the early 1970s.

Dracula, released as Horror of Dracula in the U.S. so people wouldn't think it was another re-release of the 1931 movie, was largely the movie that set the framework for what was to come.  Even more loosely based on the Bram Stoker novel than the Todd Browning film, it relied on brilliant set work, a memorable portrayal of the title character and, most importantly, the use of Technicolor to make the gore effects stand out.

Jonathan Harker (John Van Eyssen) arrives at the castle of Count Dracula (Christopher Lee) to become the librarian.  Upon a rival he is met by a woman (Valerie Gaunt) who claims to have been kidnapped and begs for his help.  Before he can respond the Count shows up, introduces Harker to his lodgings and gets him prepared for the job.  Again, the woman appears, and Harker agrees to help - only to get a couple marks on the neck for his trouble.  Dracula attacks the woman, but Harker is laid up for a day.

In truth, it turns out that Harker was well aware of what Dracula was, and his true mission at the castle is to put an end to him.  He kills the female vampire but, unwisely choosing to do so right before sunset, faces Dracula's wrath.

Harker was not working alone, and soon Doctor Van Helsing (Peter Cushing) arrives to see what has transpired.  He sees a coffin-laden coach leave the castle, and enters to find Harker has been changed.  He stakes him and has the body cremated per Harker's orders and, in returning to the nearby village of Krausenberg, finds that Harker's diary was found.

Van Helsing returns to Harker's home in Karlstadt, where he finds Harker's fiancee Lucy Holmwood (Carol Marsh) quite ill.  Her brother-in-law Arthur (Michael Gough) is none too happy to see Van Helsing, whom he holds responsible for Jonathan's death.  His wife Mina (Melissa Stribling) is a bit more welcoming, which is good since Van Helsing has some suspicions that Dracula may be behind Lucy's illness.  She soon passes, but after burial is seen by her niece Tania (Janina Faye).  No one believes her except Van Helsing, who manages on a second meeting to drive Lucy back to her grave and put a stake through her heart.

The doctor's theory is that, with his own vampire bride stolen by Jonathan, Dracula was taking revenge by turning Harker's fiancee.  This proves to be true as, with Lucy truly dead, Dracula then starts to target Mina.  With Mina growing weaker, the hunt for Dracula is on to free her from his spell.

I have said before that Christopher Lee has always been my favorite Dracula, even if I do like John Carradine and Gary Oldman's performances as well.  I did recently get more respect for Bela Lugosi's turn, as he did manage an otherworldly presence, but in this case Lee once again makes it clear why he is the best.  Lee's Dracula is always a creature with a thin, charming human veneer, but with a wild animal seething below the surface.  Within hours of appearing the charming host he is all hissing and fangs with blood dripping down his chin.

Where Edward Van Sloan had a great scene in Dracula where he beat the Count in a battle of wills, Peter Cushing is the first film where we see Van Helsing as a man of action.  Upon realizing where Dracula is hiding he literally leaps over furniture and goes in pursuit - something that the old Count is clearly not used to.  Cushing practically set the standard for the idea that Van Helsing is some sort of crusading vampire hunter, physically and mentally besting the undead at every turn.

Horror of Dracula owes much to its two main stars, and the rest of the cast does their solid service as well, but director Terence Fisher was always a part of the early success of Hammer films as well.  Hammer, like American International, used what they could and did what they could, usually with very little.  Fisher's establishing shots of Dracula's castle, accompanied by James Bernard's score, immediately set this apart from any vampire film that came before it.  He makes sure that the sets and everything else are framed in such a way that the film seems much grander, and more expensive, than it truly is.