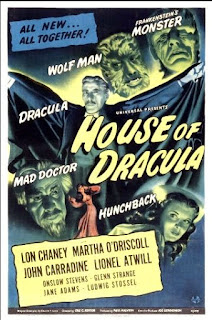 The more the Marvel Universe these days throws together almost every super hero they can find reminds me of how Universal used to do the same thing.  Going forward from Frankenstein Meets the Wolf Man, any opportunity the studio had to put as many monsters on screen as possible, even if it didn't make a lick of sense, they took.  Unfortunately, it meant that Larry Talbot's continued search for a cure for his lycanthropy became campier and sillier as things went on, and The Wolf Man never got a proper sequel.

House of Dracula somewhat ties up a number of franchises, and it was really the last for most of them save Abbott and Costello Meet Frankenstein.  It's more of a direct sequel to House of Frankenstein than it is anything having to do with the previous three Dracula films, and thus more of a continuation of Talbot's story than that of the Transylvanian count.

Dracula (John Carradine), under the guise of Baron Latos, comes to the Weisseria to be treated by Dr. Franz Edlemann (Onslow Stevens), as he states he is looking for a way to be free of his vampirism.  As usual, though, he may have other motives.  The doctor has an assistant in Miliza Morelle (Martha O'Driscoll), whom Dracula has become acquainted with in the past, and decides to make his own.  While Edlemann works on a cure, Drac gets up to his usual.

Meanwhile, Lawrence Talbot (Lon Chaney Jr.) shows up just as the moon is about to become full, also looking for a cure.  At first Edlemann thinks it's a psychological problem until Talbot purposely gets himself arrested and confined.  While in jail, he transforms before everyone's eyes.  Once he is back to normal, Edlemann thinks he can help him with the application of a mold grown on a certain flower that he has been working on to cure his hump-backed female assistant Nina (Jane Adams).

After Talbot learns that a cure will not be forthcoming within the next 24 hours he decides to commit suicide.  As usual his efforts are fruitless, and he instead gets washed into a sea cave beneath the castle that Edlemann is using.  The doctor just barely avoids being killed before Talbot transforms back into a man and the two go looking for a way out.  Along the way they discover Frankenstein's monster (Glenn Strange) half buried in mud.  It turns out when he sank in the quicksand at the end of House of Frankenstein that he once again survived, albeit in a weakened state.

Returning to the castle Edlemann first tries to revive the monster, but is talked out of it by Talbot and his assistants.  Instead he goes back to his normal studies but, noticing Dracula's attentions toward Miliza, decides to speed up the vampire's treatment. Dracula turns the tables during a blood transfusion, putting some of his blood into Edlemann.  The doctor manages to pursue Dracula to his coffin and drag him into sunlight before Miliza falls completely under his spell, but the vampire blood starts to effect Edlemann in a way that makes him misbehave at night, doing things like trying to revive the monster or commit murder.

As people once again begin to die in Weisseria the local population does as they usually do, grabbing the pitchforks and torches, and heading for the castle.  Meanwhile, Miliza, Nina and Talbot, the latter in a weakened state after being seemingly cured, must handle both the doctor and the monster.

Like Dracula was tacked on to House of Frankenstein, similarly was Frankenstein's monster in this one - so much so that some of the footage was reused from The Ghost of Frankenstein.  With Edlemann, it appears they may have wanted to some excuse to include Dr. Jeckyll and Mr. Hyde, but for some reason went for a substitute.  Some of the movie was also cobbled together from the parts of the cancelled Dracula vs. the Wolf Man that didn't get rejected by the Hayes Commission.

I have always like Lon Chaney Jr. in most of his roles that don't involve Lawrence Talbot, as I find the character to be rather bland.  Yes, he's supposed to be a tragic monster, but he's less a tragic figure and more a mopey, whiny one.  I'm sure that Chaney was happy for his contract with Universal to be over at this point, even though he showed up one more time (and uncured) in Abbott and Costello Meet Frankenstein.  Strangely, I would say that movie is more canonical in following from Frankenstein Meets the Wolf Man than either of the House movies are.

While nowhere near as good as the movies in Universal's heyday, I did find House of Dracula more entertaining than its predecessor, largely because Onslow Stevens does a good job in the lead (especially after he starts going mad) and John Carradine is one of my favorite Draculas.  He is still underused, but at least he has more screen time than he did in the previous movie.

It is fitting that this second wave of Universal horror films ended along with World War II, as rather than being the dark and atmospheric films of the 1930s they had become light escapist fare.  As real-life horrors began to fade audiences were once again ready for movies of more substance.  It didn't mean that these movies were forgotten, as they became a cornerstone of early television broadcasting, and a decade later these same creatures captured a new generation thanks to a certain British studio.