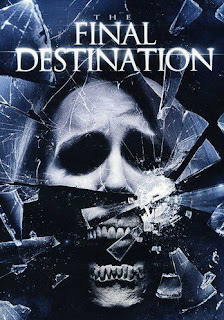 If there was one series that had some promise to it early on it was Final Destination, even if it didn't really fulfill its promise until the second movie.  Unfortunately, Final Destination 3 abandoned everything that was good about the second part.  Still, it continued to sell tickets, even if 2000s horror proved to be about as awful as the music that often accompanied it on the soundtrack.

I would definitely not say The Final Destination, the film that was originally meant to end the series, is a great film (or horror film) by any stretch of the imagination, but at least it does wipe away some of the bad taste of the third movie.

It's a day at the races with Nick (Bobby Campo) and his girlfriend Lori (Shantel VanSanten), their annoying friend Hunt (Nick Zano) and his on again/off again girlfriend Janet (Haley Webb).  This time it is Nick that sees the death of everyone around him in a hail of flying car parts, collapsing concrete and fire.  He panics, drags his friends out, as well as security guard George (Mykelti Williamson), a mother (Krista Allen) and her kids, as well as a mechanic (Andrew Fiscella), his girlfriend (Stephanie Honoré) and a racist tow truck driver (Justin Welborn) they managed to anger during their exit.

While the mechanic's girlfriend is killed in the same manner, but just a different place, as in Nick's vision, the rest consider themselves lucky to be alive.  That is, until, as usual, death comes knocking.  While drunkenly trying to burn a cross on George's lawn, the tow truck driver is set on fire and dragged to his death, followed closely by the young mom getting a rock through her eye.

With Nick having visions before each death and the group being away of what happened tow the survivors of Flight 180, Nick and Lori begin trying to save everyone.  Problem is, Nick can't exactly remember the order.  Still, while the mechanic and Hunt both die, they manage to save Janet from being killed at a car wash.

George accepts his fate and tries to hasten it, only to discover that his attempts are thwarted each time.  This leads the remaining survivors to believe that the ordeal is over.  However, it seems they forgot one person: a guy in a cowboy hat (Jackson Walker) that had originally moved and been killed but, due Nick and his friends leaving early, was in a different spot, allowing him to survive and be rescued.  After Nick and George fail to save him, Nick's next vision, rather than being hints of what will happen, becomes clear: George is next, and then Janet and Lori will die as he tries to save them, as will an entire theater and most of the patrons of a local mall.  As Nick rushes to save everyone, Lori starts realizing that everything happening in the theater is getting to be a bit too familiar.

The Final Destination was filmed in 3D, and tries to use it as a gimmick throughout.  Where Piranha 3D and My Bloody Valentine both managed to provide solid movies along with the effects, The Final Destination spends a bit too much time winking at the fact that is a 3D release and throwing things at the screen unnecessarily.  When an effect that should be shocking does turn up, like the conclusion of Hunt's death scene, instead of using practical effects that would have at least made the audience jump they use horrible CGI.  The blood literally pixilates in this scene.

That's a shame, since this does have some great set pieces that would have been better if they weren't so obviously digital effects - and ones that you would swear were done by someone's cousin in their parents' basement as a school project.  The scene at the race track could have been one of the best openers in the series, and in some ways it still is.  It's heavy on the gore, goes overboard where it should, but still manages to be quite intense.  The same can also be said for Nick's vision of the mall disaster.  Problem is it just looks unfinished and unconvincing.

Despite all this the characters, save Hunt, are nowhere near as annoying as the third movie.  Bobby Campo and Shantel VanSanten are at least believable as a couple, and for once they're not trying to convince us that this group of people in their mid 20s are teenagers.  Still, even though director David Ellis was responsible for Final Destination 2, it seems like he's largely directing this as an afterthought.  He needed a paycheck, the movie was a cheap way to milk some more money from the series before people completely gave up on it, and that was about it.  That it turned out to be even halfway decent is a bit of a surprise.