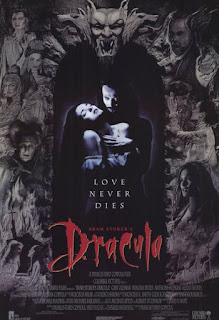 Picture me at 20 years old.  One of the few (if possibly only) celebrity crushes I ever had (with Winona Ryder) before realizing how silly and stupid such things are.  But, then again, most of the guys I saw Bram Stoker's Dracula with our various press passes largely were the same way.  Not to mention, as someone truly getting into film, I had discovered Francis Ford Coppola through The Godfather, its sequels and Apocalypse Now.

And here was this brand new film from one of my cinematic heroes, starring one of the few actresses that, at the time, I thought could do no wrong!  Not to mention Anthony Hopkins, who had been in The Silence of the Lambs just the year before, in a performance and a film that I had already started judging others by.  Yes, there was some guy named Gary Oldman playing Dracula himself, whoever that was (I had not seen, or heard, of Sid and Nancy at that point, even though I was a Sex Pistols fan; typical 20-year old).

Well, of course I loved it.  The visuals, particularly the shadows moving independently of Dracula, stayed with me for years.  Unfortunately, so did Keanu Reeves's poor attempt at an English accent, so bad that I completely forgot how equally bad Ryder's was.  It was really everything I hoped it would be - the overblown spectacle I would want from the guy who made Apocalypse Now, as well a beautiful homage to the original 1931 Dracula with wonderful costumes and a decidedly '90s aesthetic, even of the '90s it took place in was a century before.

I know I saw it quite a few times; at least twice in the theater, and a few more on video within a few years of its release.  It was really the last movie of its kind that Coppola did, so that pretty much stuck in my head as the end of an era, but for the most part the movie rested on its laurels in my head.  It was really strange seeing it from a completely different perspective.

After Renfield (Tom Waits) returns from a trip to Transylvania to handle a real estate deal with Count Dracula (Gary Oldman), he ends up in the Carfax Asylum, under the care of Dr. Jack Seward (Richard E. Grant), eating bugs and raving about the coming of his master.  Jonathan Harker (Keanu Reeves) is sent to complete the affair, leaving his fiance Mina (Winona Ryder) in the care of her wealthy friend Lucy Westenra (Sadie Frost).  Where Mina is a proper 1890s lady, Westenra, also secretly proper, has a number of suitors, including Jack, the American Quincey P. Morris (Billy Campbell) and the man she eventually chooses, Arthur Holmwood (Cary Elwes).

Harker travels to Transylvania, closes the deal with Dracula on Carfax Abbey, and is told to write his friends and family that he will be staying a month at the castle.  He soon finds himself trapped in an Escheresque nightmare where reality barely maintains a hold, and kept weak by the nightly feedings of Dracula's brides.  He soon manages to make his escape, barely surviving a plunge into an icy river before finding shelter at an Orthodox convent.

Meanwhile, Dracula, entranced by the picture Harker carried of Mina, arrives in England seeks her out.  As told in the prologue, after winning a battle against invading Turks, Prince Vlad Dracul returns to find his wife Elisabeta has committed suicide after receiving false news of his demise.  He curses God, vowing to live as an immortal and punish the world for taking his one love from him.  Mina, as he believes and is soon confirmed, appears to be the reincarnation of Elisabeta.

In order to propagate his number he first begins to visit and change Lucy.  Concerned, Arthur allows Jack to send for his mentor Abraham Van Helsing (Anthony Hopkins), who arrives and soon becomes suspicious that what they are dealing with is not a normal illness, but an undead menace.  This is confirmed when Lucy dies.  Van Helsing, although Quincey, Arthur and Jack are at first reluctant, insists that that Lucy's body be ritually mutilated to avoid her rising.  They find her casket empty, and Lucy arriving with a child on whom she intends to feed.  They are able to force her back into the coffin and complete their mission.

While this is happening Dracula begins to woo Mina, holding back his instinct to feed on her.  Mina, with Elisabeta's memories flooding back, begins to fall for him as well.  However, she decides to do the proper thing once she hears that Jonathan is still alive, and travels to Romania to meet with him and marry him before returning to England.  When they do, Van Helsing realizes they know the truth, and also realizes the danger that Mina is in.  Jonathan reveals that Dracula has taken up residence at Carfax Abbey, and the men go to destroy Dracula's refuge.  However, it is in vain, as Mina willingly returns to the Count and drinks of his blood, beginning her change. A confrontation between Dracula and Van Helsing results in the latter being bested and Dracula heading back to his homeland.

Mina is prevented from leaving but, seeing the chance to join her lover there, agrees to go with the men to track him down.  They pursue him by sea and land to do away with the vampire and save Mina's soul.  In the end, though, it may be Mina herself that must make the ultimate decision.

American Zoetrope was in bad shape at the time this movie was made, and its success ended up saving Coppola's production company.  Bram Stoker's Dracula managed to break records at the time on its opening weekend.  Despite Reeves's laughably stiff performance, Gary Oldman's portrayal of Dracula became almost as iconic as Bela Lugosi's and Christopher Lee's.  His scenery-chewing style was even more prominent in movies like Leon: The Professional and The Fifth Element, and his fame only increased.  As for Winona Ryder, her acting was good enough to overcome her bad attempts at sounding British and, despite seemingly not getting along with Oldman at the time the movie was made, they still have some great chemistry.

As for Hopkins, he gets some great lines in as Van Helsing, but is still not as memorable in the part as either Peter Cushing or Edward Van Sloan.  The decision to make the vampire hunter a bit of a batty old eccentric was sort of a misstep, even if Hopkins plays the part with the ease he does anything you give him.

What really stands out after all these years is both the costume and set design, as well as the effects.  Where the 1979 Dracula had its share of surreal moments, Roman Coppola managed to use a number of old-school camera tricks, as well as learning a number of methods of his own, to emphasize how outside of the rest of the world Dracula really was.  The early scenes in the castle where shadows move on their own and the laws of physics twist at random are some of the most effective, as are many scenes of growing menace as it is clear that Dracula has a hold on both the land that surrounds his castle, but on the soul of anyone he sets his sites on.

Going completely practical also meant heavy makeup work, which Oldman occasionally found difficult, as Dracula appeared as a bat creature and a wolf man at various times, as well as transforming in a horde of rats at one point.  Despite many liberties taken with the novel (the whole love story is not there, and some lines were obviously taken from the play and the original film), the decision to make Dracula able to walk in sunlight as well as change into a number of forms was one that was past due.

For a movie rebelling against the temptation to embrace new-fangled CGI effects, and one with conscious stunt casting in order to attract a younger audience at the time (which is why Reeves is in it instead of, say, having Cary Elwes, an actual British actor, play the part of Jonathan Harker), it amazingly worked well in updating the tried and true story for 1990s audiences.  Surprisingly, despite the fact that when it is flawed it is so heavily that it brings for unintentional laughter, it is still one of the best adaptations of the novel to make it to the screen.