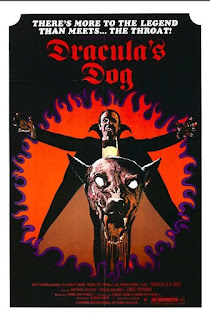 Somehow we never got Dracula's Wet Nurse or Dracula's 8th Grade Lunch Lady, but we at least got a vampire's best friend with Dracula's Dog.  If you are unfamiliar with this particular familiar, then you may have encountered t his at sometime in the past as Zoltan,.. Hound of Dracula.  It is quite low budget, but manages to still be a decent drive-in flick.

Russian soldiers are excavating an area in Romania and end up uncovering a tomb with a number of Draculas in it.  Turns out the whole family had a habit of becoming vampires at one point or another, and the last one (Michael Pataki) managed to acquire a large doberman owned by a man named Veidt Smith (Reggie Nalder).  He also ends up acquiring Smith as his servant.

A guard (Tom Gerrard) left to guard the tomb is awakened by a rumbling that expels one of the coffins.  Curious, he opens it and finds a stake driven through the body inside.  Removing it brings Zoltan back to life.  The god quickly kills the guard and retrieves Smith's coffin, removing his stake and bringing him back to life as well.  It turns out, though, that Smith is not a vampire himself, but something in between that must find a new master of the Dracula bloodline to serve.  The last of the line happens to be living under the name Michael Drake (Pataki) in Los Angeles.  Inspector Branco (Jose Ferrer) is dispatched to stop warn Michael and stop Smith.

As for Michael, he is planning to take a family vacation with his wife Linda (Libby Chase) and his kids Marlan (Jan Shutan) and Steve (John Levin).  At the last moment he is convinced to take his two dogs and their new littler of pups along with them.  However, Smith and Zoltan follow them in a hearse to their campground, with Zoltan turning one of the puppies when it gets away from the family.  Smith is furious, since his main concern is turning Michael into a vampire, since there is a limited time before they will perish without a new master.

Michael's dogs prove quite effective at protecting the family and driving off Zoltan, so Smith has them separated and changed, along with the dog of a couple nearby fishermen.  Inspector Branco arrives at the camp just as Michael and his family are about to leave, and lets him in on what is going on.  With the rest of the family sent home, Michael and Branco retreat to a rented cabin to lure Zoltan and Smith and put the stakes back where they belong.  However, the new pack of vampire dogs terrorizes the two, tearing the cabin apart.  Knowing that it is time to bring the fight to their attackers, the two set out the next night in different directions to put an end to the threat.

While there are not a lot of effects here, what there is is pretty good.  That's because Stan Winston is on board doing the makeup and gore, and I believe this is one of his earlier films.  The movie is rather tame through most of it, despite the fact they got a dog that looks halfway frightening, added vampire teeth and largely enhance him through sound effects.  When it comes time to actually get bloody, particularly in an attack on a camper the Smith is afraid may call the cops, it looks better than the budget would make one believe.

Acting all around is pretty decent, despite some silly lines.  Also, Albert Band, father of Full Moon Video's Charles Band, is at the helm as director.  Neither of the Bands really got a chance to direct full-on big budget films, but they are good at using what they have.  Both Michael Pataki and Jose Ferrer are solid b-movie actors, and Reggie Nalder is quite good at standing around looking frightening.

Sure, it is not some hidden horror classic waiting to be rediscovered, but it is fun, with at least one tense scene and a bit of a different take on the whole Dracula legend.