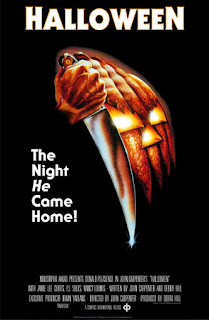 John Carpenter is considered one the tentpole horror directors, and it largely began with this movie.  At the time he was still an independent movie director, having had some small success with Assault on Precinct 13, and just managed to be lucky enough to get funding from a guy with deep pockets that figured if he was spending the entire budget of Halloween daily on other films, then there was really not a lot of risk in seeing what something with a low budget could return.

What happened is it not only became one of the highest grossing horror films, but also (at the time) the highest grossing independent film.  The horror genre is, almost by nature, imitative and exploitative, and the crazy fact is Carpenter came up with something that gelled in a way that the movies it inspired, and the sequels involving Michael Myers, rarely did.

On Halloween in 1963, Michael Myers (Will Sandin) dons a clown mask and murders his sister after she has a quickie with her boyfriend.  15 years later he has sat in an insane asylum, not saying a word, and being treated by Dr. Loomis (Donald Pleasance).  Myers is up for a psychiatric evaluation, so Loomis has reluctantly agreed to transport him with the help of his assistant Marion (Nancy Stephens).  When they arrive at the asylum they find the inmates stalking the ground unattended.  Myers (Nick Castle) then attacks Marion and steals their car.

Convinced he knows what Michael is up to, Loomis heads to Haddonfield, IL, where Michael murdered his sister prior.  There it is coming up on Halloween once more, and Laurie Strode (Jamie Lee Curtis) and her friend Annie (Nancy Kyes) are both dreading the fact they have to spend the night babysitting rather than having fun.  Their cheerleader friend Lynda (P. J. Soles) is not tied down by any such problems, and is out for a night of drunk debauchery.

Laurie starts becoming concerned when she sees a strange car hanging around town, especially near the old Myers house, which her real estate agent parents are intending to sell.  She is also seeing a man following her around, appearing and disappearing.  Her sense of unease increases as, when it comes time to babysit, her charge Tommy (Brian Andrews) keeps insisting he is seeing the Boogeyman outside.

While Laurie and her friends are going about their responsibilities, Loomis is trying desperately to get local law enforcement to take him seriously.  He arrives in Haddonfield, and finds an ally in Sheriff Brackett (Charles Cyphers), who at first doesn't believe him but becomes more and more convinced.

After Annie seems to disappear after saying she is going to go get her boyfriend after bringing over Lindsey (Kyle Richards), the girl that she has been babysitting, she gets even more concerned when she gets what at first she thinks is a prank call from Lynda.  Investigating Lindsey's house across the street, she finds out that Michael has set everything up as a trap for her, and it may be up to her to survive as it is doubtful that Dr. Loomis will arrive in time.

Where slashers are usually known for being a by-the-numbers bloodbath, Halloween is more concerned with building up a frightening atmosphere in order to let everything out at the end.  Even then we don't have over-the-top gore, but rather much more effective and disturbing scenes, such as Michael looking at a corpse with childlike curiosity after impaling it to a wall.

The other advantage to this is that, other than establishing how evil Michael is, Carpenter did not see a reason to just simply begin killing everyone in sight.  As psychotic as Myers is he holds off until he is in control of the situation, keeping Laurie scared but not so much that she becomes overly suspicious.  Jamie Lee Curtis has always been a good actress, and she really sells the fear that Laurie is feeling as she tries to fight off Michael and protect the kids.  It's also important because by the time things do kick into high gear we care about what is happening to her.

I like almost everything P. J. Soles is in, but largely she plays the same character here as she did in Carrie, which was why she got the part in the first place.  Nancy Kyes is a more understandable friend to Laurie, with Annie being the slightly rebellious daughter of the sheriff, but still responsible enough to make sure the kid she is babysitting is taken care of if she's going to get up to mischief.

Halloween has been said to set the pattern for the teenagers that have sex to die while the virgin lives to fight off the monster, but it isn't so cut and dry here.  The fact is, no one except Dr. Loomis knows that Michael Myers is in town and planning on killing people.  The deaths of Laurie's friends (especially Annie, who is only planning on picking up her grounded boyfriend Paul) are less about sex and more about opportunity.  They are all in one spot, and Myers, for whatever reason, really wants to make Laurie suffer before she dies.

In case you are wondering, at no time does the movie reference Laurie Strode being Michael Myers's sister.  That may confuse those that are familiar with the plot (as it is) of the later films, but here, wisely, there is no backstory other than Michael is evil, killed his sister and, because Annie yells an insult at him while he's skulking around town, decides to get even by murdering them all.  It is that very lack of motivation that removes any sympathy the audience may have for the killer.  He is a force of nature unleashed upon the world.