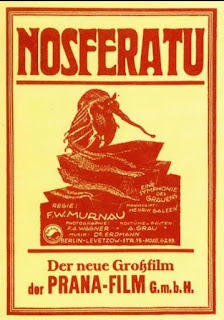 One thing that is still unfortunately true is that when artists pass their art often falls into the hands of family members who, while having their own financial interests at heart, rarely have any interest in the art themselves, nor in letting anyone else enjoy it.  The idea of copyright and ownership of work was largely an 18th century idea that blossomed throughout the 19th and early 20th, with previous generations of artists more than happy to have works build on theirs as they had built on those who had come before.

The shift to valuing original work, and holding onto that work, as well as controlling how it would be distributed, was much at odds with tradition.  The novel Dracula was one of the more popular novels of the late 19th century but, despite its popularity, Bram Stoker's widow Florence was determined not to sell any film rights.  True, there may have been a price that would have changed her mind, but no doubt the small German film company Prana in no way would have been able to meet it.  So, they did the one thing they could: Henrik Galeen, who had also worked on other German horror films, was hired to write an adaptation.  Many key parts of Dracula were kept, but names and locations were changed, the appearance of the vampire severely altered, a plague subplot added and an aversion to sunlight that had not previously been a weakness (traditionally daylight only weakened a vampire's power, but caused no lasting harm).

For any college student who, at the last moment tried to make it through an exam by "not quite" plagiarizing, should know, changing a few things around does not change the definition of the term.  Florence Stoker sued, and won.  The result is that Prana Film declared bankruptcy to avoid paying her, while all copies of F. W. Murnau's Nosferatu, a Symphony of Terror were supposedly destroyed.

Happily, someone crossed their fingers when promising to do this.

Hutter (Gustav von Wangenheim) is a real estate agent who works for the eccentric Knock (Alexander Granach) in the northern German port city of Wisborg.  He lives a life of comfort with his wife Ellen (Greta Schröder) and is looking forward to making even more money by running an errand for Knock.  His boss wants him to go to Transylvania with a real estate contract for an abandoned house opposite of Hutter's property, as a noble by the name of Count Orlok (Max Schreck) wishes to move to Wisborg.

Hutter sets out, reaching a small village and finding out that Orlok is quite feared.  Warned about going to the castle at night due to a werewolf prowling about the forest, Hutter spends the night in the local inn.  There he finds a book, and in it much information about different creatures - including the vampiric Nosferatu.  Being a modern man of reason, he of course dismisses it as fairy tales.

The next day he is driven as close to Orlok's castle as the local coach will take him.  Resigning himself to an exhausting hike to the crumbling castle, he is met along the way by a black-shrouded coach with a mysterious driver travelling at an unnatural speed.  The coach brings him to the castle close to midnight, where he is greeted by the strange, rat-like Orlok.  Troubled by strange dreams in the night, he wakes up to find bite marks upon his neck.  During the day, however, he dismisses his suspicions, but soon grows to realize that nature of the man who is to be his new neighbor - especially after Orlok pays a bit too much attention to a picture of Ellen.

Hutter is locked in the castle, but soon makes his escape.  Weak from blood loss, he is rescued and brought to a convent to recover.  Meanwhile, Orlok embarks for Wisborg upon a schooner, leaving a trail of plague in his wake.  The crew soon begin to suspect that they are the reason, discovering that many of his coffins are full of rats.  They also soon discover their passenger as well and, with all the crew dead, the ship makes its way into Wisborg, where Orlok's feeding upon the citizens is thought to be a further spreading of the plague.

Knock, who seems to have had some connection with Orlok since he sent Hutter on his journey, delights in his master's arrival and gradually grows more insane.  He finally escapes, but the city blames him for bringing the plague and hunt him down.  Hutter recovers, returning to Wisborg and to Ellen, who soon discovers the truth about what is going on when she reads the book he has brought home with him.  It turns out that the only way to stop the vampire is to willingly give him her blood and keep him occupied until sunrise so that he may be destroyed.

Despite some key changes, audiences would have still recognized this as what it was supposed to be, regardless of what the filmmakers said in court.  Hutter stands in for Harker, Ellen for Mina, Knock for Renfield and Orlok for Dracula himself.  The events in the castle, on board the ship and Knock's predilection for bug eating are all straight from the novel.  The idea of the plague adds some intrigue, especially since Schreck's makeup for the character resembles a rodent, with the fangs used to puncture the neck being incisors rather than canines.  The makeup work was so effective that rumors began that Shreck really was a vampire - rumors made all the more rampant by the fact that, outside of Germany, the full body of his stage and screen work was rather unknown.  Rather than being a member of the undead, Schreck was actually a quite talented actor and makeup artist, generally playing the parts of older characters on stage.

F. W. Murnau worked strictly from Galeen's script, only adding in parts where he found stuff missing.  Supposedly he also filmed to a metronome, as Galeen had meant for the film to have a certain rhythm throughout.  It is considered to be the Expressionist school of German filmmaking, although it is much different than The Cabinet of Dr. Caligari and other similar films that fall under that heading.  Light and shadows play a major role throughout, but Murnau, despite only having one camera to work with and a limited budget, managed to film some of the best exterior and location scenes of the time.

He also wisely does not overuse Orlok.  Whenever the count is on screen he has a purpose, and many of his appearances - especially when he rises from his coffin on-board the ship or stalks up the stairs to Ellen's room - are hauntingly shot.  Nosferatu may not be scary in a modern sense, but it is still quite effective is portraying a feeling of menace.

Though known to horror fans for this movie, Murnau continued his career and, due to the success of his 1924 film The Last Laugh eventually ended up in Hollywood.  As for the story of Dracula, Universal had deeper pockets and were able to pry the movie rights from Ms. Stoker's hands, as well as obtain the rights to the play adapted from it.  Despite the fact that Florence Stoker tried to destroy a significant piece of art,  it had already been distributed in enough places that, although we may never see it exactly as Murnau intended, we still have the movie largely intact to enjoy to this day.