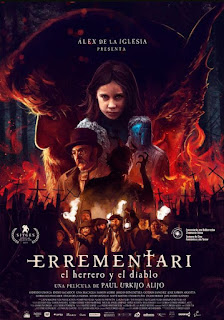 There is a story that has been around for millenia, going back to possibly the bronze age and, even possibly, back to the stone age.  It's a story told with variation throughout Europe about a man who makes a deal with an evil spirit (a genie, a dark god or, when Christianity took hold, the Devil) and then made him his prisoner in order to get out of the consequences of the deal.

The Basque are kind of a mystery.  Most likely they are all that is left of the original humans that settled Europe after coming over from Africa, eventually displacing and intermingling with the Neanderthals that had already evolved to live in the harsh, cold climate it was at the time.  Whether the later tribes that settled got it from them, or they got it from the Indo-Europeans, it has stuck around.  The Brothers Grimm transcribed their own version, and about every variation possible shows up in fairy tales.

While I'm quite sure this is one of those stories that Disney has made a hard pass on, it is interesting to see a movie finally made that recounts the story, even somewhat updating the story to include other traditions about Hell and its organization.

During the first Carlist War in Spain, a group of deserters are put before a firing squad.  One man, Patxi (Kandido Uranga) appears to be impervious to bullets, and assisted by a demonic spirit.  He manages to kill his captors and steal a wagon with a shipment of gold.

Eight years later that man is a blacksmith in a small village in the Basque region.  Upon returning from the war he found his wife had thought him dead and had remarried, having a child with another man.  Patxi kills her new husband and threatens the child.  In desperation, she hangs herself, condemning her soul to Hell.

A representative of the Spanish (Ortzi Acosta) arrives in the village on mysterious business, wanting to speak with the blacksmith.  He settles in at the inn owned by Santi (Josean Bengoetxea).  Santi's friends search the room of the man while he is traveling to the smith's compound, and find a letter stating that he is there because he has tracked the gold as being stolen by Patxi, and has arrive to take it back.

Meanwhile, Santi's son Benito (Altor Urcelai) is smitten with a girl name Usue (Uma Bracaglia), although his affection typically comes out as bullying.  Usue is an orphan taken in by the village priest Mateo (Jose Ramón Argoitia) after her mother committed suicide.  Usue never knew her mother, but would like to find some way to save her soul from Hell.  One of the few possessions on her mom's is her doll Matilde, which Benito rips the head off of and tosses over the blacksmith's fence.

Santi's compatriots are tasked by the government agent to go into Patxi's compound to search, and in doing so they remove the chains from his gate.  They end up angering him and, as he tries to get them to leave, an accident happens and one dies.  Usue, unaware of what has happened, notices the gate is open and enters to retrieve her doll.  On entering the smithy, she finds a young boy locked in a cage who begs her to get Patxi's keys while he sleeps and free him.  She does, but the boy turns out to be the demon Sartael (Eneko Sagardoy), whom Patxi has kept prisoner for the last eight years.  Although Sartael technically fulfilled his part of the bargain, like most deals of the type it came with tragedy, and Patxi has refused to fulfill his part due to believing he was cheated.

Patxi rescues Usue from Sartael and places him again in his cage.  In tormenting the demon, the two soon become friends.  However, the villagers believe that he has kidnapped the girl and, along with the government agent, arrive just as he is bringing her out to send her on her way.  He is beaten and chained up for interrogation.  Mateo, upon seeing Sartael, plans to take him to the Vatican so the church can see that the faith they believe in is real, but before he can it turns out that Hell has sent another messenger up to inform Sartael that, for his failure to bring in Patxi's soul, as well as other examples of incompetence, he has been demoted.

The new revelation leads Usue to petition to be taken to Hell so she can find her mother.  When that happens, Patxi agrees to accompany Sartael.  The demon, angry at his treatment by the government of Hell and not happy with his new post, agrees to take the blacksmith - and a blessed bell - into the netherworld, so that Usue can be rescued and Patxi can take his grievances up with Satan himself.

Errementari is definitely beautiful to look at.  Great set design, particularly with the smithy, which with the combination of Sartael's presence and Patxi's grief may as well be an station of Hell.  The designs of the demons are right out of medieval paintings, including one with a face on its rear when showing the various array of Hell's greeters.  We don't see much of the infernal realm itself beyond its gates, but it's an amalgamation of everything a Christian, in this case a Catholic, would expect.

Acting is all around great, and it is definitely a treat to hear a movie in Basque.  Not only is it an important survivor in the world of languages, but it is culturally important as well.  The time and setting have much to do with Spanish and Basque history, and a series of civil wars that lasted through the 19th century and eventually culminated in nationalist forces, under Francisco Franco, placing the country under dictatorial control for much of the middle part of the 20th century.  This cultural gulf is easy to overcome as the story is universally interesting, being older than either Faust or Daniel Webster.

Director Paul Urkijo Alijo does owe a debt in style to Guillermo del Toro, but there is definitely enough singular vision to overcome the influence.  I am also willing to excuse it since, if del Toro is responsible for a renaissance in Spanish film making (even outside of horror) then his influence is going to be understandable.

One word of caution, though.  There is a dubbed English version of this that, from reading other reviews, pretty much ruins the movie with bad voice acting.  And why would one want to hear it in English anyway?  Basque is a beautiful, ancient language, and quite fitting for a tale of this sort.