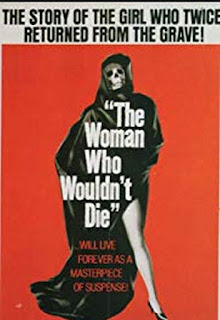 Killing your wife.  It is amazing how many movies use this motif.  It is also amazing how many men have tried it in real life.  Obviously, if they got the idea from an old suspense film, they were too busy taking notes in the beginning to make it to the end.

In this day and age, with divorce being much less a taboo subject, it makes even less sense to use such extreme methods to get out of a bad marriage.  But, alas, for whatever reason - money, misplaced rage or just stupidity - they try.  It's a subgenre of horror that should be dated an stale by now.  Unfortunately, it still finds relevance in the modern world.

Fortunately if you love suspense films it can also be quite enjoyable if the film is done right.  After all, who doesn't like to see the evil cad suffer?

Raymond Garth (Gary Merrill) is an American playboy married to Ellen Garth (Georgina Cookson), who happens to be the heiress to a great fortune resulting from a milling operation.  Not only did she inherit her family's money, but also the job of running the company, as she is is also a successful business woman.  She constantly reminds Raymond that he's around to make her happy, as she doesn't trust him to run anything.

Alice Taylor (Jane Merrow) is Raymond's niece by marriage, and he is quite delighted when she shows up back from her time as an art student in Paris.  She's all grown up, and she also seems to have a thing for her uncle Ray.  Only problem is, without Ellen's money, neither of them are going to find life easy.

Enter Richard Corbett (Neil McCallum), Ellen's right-hand man, who happens to be tired of living in her shadow as well and has ambitions of his own.  With Raymond he cooks up a plan: right before Ellen is to leave for a trip to Italy he should kill her.  Corbett will then have an actress (Christine Glynn) pose as Ellen so everyone thinks she went to Italy.  He will then make sure an accident happens, putting him generally in charge of the company and giving both Ray and Alice their inheritances.

Problem is, Ellen isn't an idiot.  She guesses that something may be up between Ray and Alice, and manages to catch them in the act.  She sends Alice away, and forces Ray to service her in order to remind him who he belongs to.  Ray ends up killing her and burying her in a potting shed at a "honeymoon cottage" she happens to own.  This causes a problem for Corbett, as Ellen wasn't supposed to leave for Italy for a week.  Still, they are able to keep anyone from getting suspicious during that time, and the original plan seems to go off without a hitch.

Alice inherits half of Ellen's fortune and her main home, while Ray inherits the other half and the cottage - with the provision that he must remain in residence at the cottage or forfeit his portion of the money.  Things take turn when Alice starts seeing Ellen in her home.  Ray also begins to suspect something is up, and it is confirmed when he digs Ellen's body up to find that it is no longer there.  Rather than concerned that he has ghost problems, his thoughts turn to the fact that he may have a living, breathing vengeful wife on his hands, who may want to get rid of both him and Alice.

Of course there is a twist, as there often is in these movies, but it was not quite the one I saw coming.  Well, not all of it, at least.  Ray is not the brightest bulb, so I figured things were not going to go his way in the end.

Gary Merrill plays the vapid and amoral Ray perfectly, especially in the creepy way a guy who is in his 50s pursues a girl in her early 20s.  His look the first time he sees her arrive is nothing short of predatory.  Georgina Cookson is convincing as the type of woman you usually don't see in a movie of this time period.  I think that helps this film connect a bit better than others, as she is a more modern character that we would recognize now.  Unfortunately, at the time it was probably used to turn audiences against her as being pushy and out of her place.  Whether intentional or not the years have made her a more sympathetic character.

Neil McCallum and Jane Merrow understandably play more to type, as the main dynamic, even after she is killed, is centered on Ray and Ellen.

The other surprising thing is that I wonder if metaphorical impotence was meant as a subtext, since it really seems to be something that raises its ugly head for both Ray and Corbett.  While there is nothing like that happening (as far as we know) in the literal sense, both men seem to be in some way emasculated in their relationship with Ellen.  Rather than moving on or just dealing with it, their first thought turns to murder, which if successful means that they don't have to face the idea (at least in their minds) that they are less than men.  It's going even further than putting her in her place.

Outside of whatever the movie may be trying to say about budding feminism and fragile masculinity, it works well as a tense thriller.  Instead of silly ghosts most of the tension is ratcheted up by the use of sounds, be it footsteps or the tapping of a cane or just wind blowing at an open window.  Everything is left up to the imagination which, given the budget, is a good idea.  There is a great scene toward the end that I'm sure made a number of audiences jump without trying too hard.

This was Gordon Hessler's first movie, and so far I have reviewed two others by him (Scream and Scream Again, The Oblong Box), neither of which I was impressed by, even if I did like his filming style.  He is quite good at keeping the camera in motion, with some ballet-like glides around his characters and sudden zooms a la Robert Altman.  Some of that is on display here, but he is also given a focused script to work with, and that helps immensely.

The movie was also released under the name Catacombs.