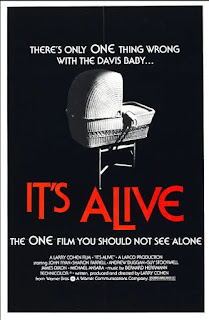 In 1973 Larry Cohen was enjoying the success of Black Caesar, one of the key blaxploitation films, and was working on its sequel, Hell Up in Harlem.  While making that movie Cohen also decided to make a horror film.  Featuring a couple dealing with a killer baby, It's Alive resulted in Cohen becoming primarily known as a horror director.

Frank (John P. Ryan) and Lenore Davis (Sharon Farrell) are expecting a second child.  It was kind of a surprise baby as they are approaching later life, but they decide to keep it.  They ship their child Chris (Daniel Holzman) over to his uncle Charley (William Wellman Jr.) for a few days while Lenore heads to the hospital.

During labor, she becomes concerned.  When she was in labor with Chris, at least according to Frank, it was only 45 minutes.  This time it seems to be taking longer, and the baby is a lot bigger.  Still, the doctor goes for a live birth.

While Frank is waiting, he sees one of the doctors stumble out of the maternity ward and collapse.  Running into his wife's room, he finds the entire delivery crew has been slaughtered and his baby is missing.  At first he thinks someone killed them and abducted the kid, but the truth soon becomes apparent: their new baby is a mutant, with claws and teeth, that will kill anything in its path.

News soon gets out about the killer baby, and his family is named on the radio, costing him his public relations job.  Some of the money is made up by agreeing to sign the corpse of the baby over for medical experiments at the behest of their doctor (Shamus Locke), but the most important thing that both Frank and Lt. Perkins (James Dixon), who is leading the Los Angeles police on the hunt for the child, is kill it before it takes more lives.

That it continues to do until Frank finds out the truth:  the child eventually found its way home to its parents, and his wife, teetering on the brink of insanity, has been harboring it.  After escapes into the Los Angeles sewer system, Frank agrees to assist the police in tracking it down, but his wife may not be the only one who has some doubts about what should be done.

First of all, Larry Cohen does the smart thing, never showing the baby in full (it was an animatronic doll created by special effects and makeup expert Rick Baker, here early in his career).  I am sure a full-on shot of the doll, given the budget for the movie, would have been hilarious, but seeing a tooth here and a claw there and a bulging, vein-strewn head leaves a lot to the viewer's imagination.  It's especially important when there is quite a bit of intentional humor throughout the film; having unintentional laughter would have ruined the classic scene where a milkman is murdered, with his blood mixing with spilled milk on the street.

Happily, this is the 1970s, so Cohen gets away with a lot more than he would today.  Keep in mind we have the entire Los Angeles police force trying to shoot a baby - something brought home in a weird, twisted way with an iconic scene itself.  As usual, Cohen has a knack for making his movies look much more expensive than they actually are, largely due to his ability to direct some excellent action scenes.

Both John P. Ryan and Sharon Farrell go above and beyond as the parents, giving performances in excess of what you would expect in a movie like this.  It helps to elevate it beyond it's obvious attempt to ride on the heels of The Exorcist and take things a step forward.  Both could have phoned it in, but you actually have some sympathy for how their lives have been torn apart through no fault of their own.

It's Alive didn't get much attention on its first run, but was successful enough on re-release (largely due to a brilliant ad campaign) to eventually produce two sequels (both directed by Cohen) and the inevitable remake in the 2000s.