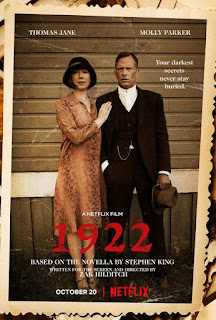 While I have every Stephen King book published except for The Outsider, there are so many adaptations of his work that I doubt I will ever see them all.  It often surprises me what they do try adapt.

What doesn't surprise me, especially in a lot of the anthology series where they try to bring his short stories to life, how bad they turn out.  While Stephen King can make a strange town filled with dead rock stars seem unsettling, seeing it made into a short film makes the concept laughable.  That's certainly a situation to consider when making movie versions of novellas from a collection like Full Dark, No Stars.  The collection was intentionally made up of material that was more disturbing than usual.

Still, three movies have come from it.  I really can't see Fair Exchange, the one exception so far, getting a full film treatment; in fact, I'm surprised Big Driver got made at all, since the only two I could see making it to the screen were A Good Marriage and this particular one, 1922.

Wilfred James (Thomas Jane) lives with his wife Arlette (Molly Parker) and son Henry (Dylan Schmid) on a farm outside the small town of Hemingford Home, Nebraska.  Wilf is happy to spend the rest of his life working the land, and would like nothing more than to add the 100 acres his wife has just inherited from her father's passing.  She, however, has other dreams, and would like to sell the land so the family can move to Omaha where she can open a dress shop.

Arlette has never really been happy living on a farm, and this newfound possibility of freedom is causing tension between the couple, to the point that she suggests he just divorce her so she can be on her way.  The last straw for Wilf is that Arlette intends to take custody of Henry and move him to the city as well, while the acreage gets sold so a slaughterhouse can be built.

Rather than go through with the divorce Wilf devises a plan to get rid of her.  He starts turning Henry against her, convincing him that his mother is unsound and also using the fact that he would be separated from Shannon Cotterie (Kaitlyn Bernard), the girl he is in love with.  Eventually Henry is convinced and the two get Arlette drunk and, while she is passed out, slit her throat and dump her body in a disused well.

Some suspicions about the story of her leaving in the night are initially raised, but Wilf and Henry are able to cover their tracks and avoid suspicion.  Still, although things on the farm appear to go on as normal, their consciences won't let them rest.  Arlette's corpse attracts rats, and Wilf starts to see them everywhere, both real and imaginary, as well as seeing Arlette's ghost.  Meanwhile, Henry starts calling himself Hank, and soon gets Shannon pregnant.  Her father (Neal McDonough) demands that Wilf pay for part of the cost of sending her to a girls' school until she has the baby.  Wilf, in order to get his mind off of Arlette, borrows more than he should, intending to do work around the farm.

Henry, upset about being separated from Shannon, takes off in the family car, commits a few robberies and then breaks her out of the school.  The two soon become known as the Sweetheart Bandits and make a name for themselves across the Midwest in as the year comes to a close, and eventually meet a tragic end.

In debt, with his house and barn crumbling and unable to work the land, Wilf eventually loses the farm and has to move to Omaha to find a job.  Still, the rats follow him wherever he goes, as does the ghosts of conscience.

I was concerned that their would be a bit too much temptation to make the ghosts real in this in order to push this fully into the horror category, but happily, like in the story, whether what Wilf is seeing is real or not is often left up to the imagination.  There are some changes - slitting Arlette's throat instead of smothering her with a pillow - but the results are the same.  A rash decision ends up ruining various lives, even if they don't know what triggered it.  In the end Wilf is left with the guilt and ghosts of his own making.

This was probably the easiest one to adapt out of the collection of novellas, but Zack Hilditch did a good job of sticking with the story instead of going down paths that would have undercut it.  It may be a problem for some viewers expecting normal Stephen King style horror; the movie is a period drama and, while it has some disturbing makeup effects, it doesn't try to overdo the violence.  There is enough disturbing about the story itself that it is not needed.  That's the most important thing about 1922.  If you have read it, this is essentially what you imagined, even if parts have been altered or truncated.

There are still some problems, and largely due to budget.  Although it's a split second shot, the cow going down the well is horribly rendered, as the real cow suddenly turns CGI before its fall.  I think Hilditch thought no one would notice as fast as it goes by, but it is quite apparent.  Also, there are times where the snow is just - well, not right.

Special mention should be made about a rather effective soundtrack by Faith No More vocalist Mike Patton.