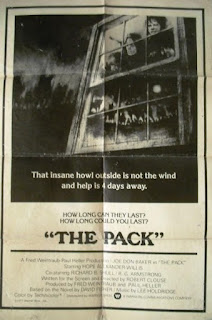 Joe Don Baker is a name that brings up many, many memories of watching Mystery Science Theater 3000.  So many of his movies made it on there, since so many fell into public domain at one point or another.  He isn't a horrible actor by any means, but most of the roles he took after Walking Tall were not ones that lead to a long and fruitful career.

The Pack was one of those movies, now largely forgotten in the whole slew of "animals attack" films inspired by Jaws.  That's a shame because, while not a great movie by any stretch, it is better than many of the more well-known films that followed the same formula.

Jerry (Baker) is a marine biologist stationed on remote Seal Island.  The island largely consists of a small village, a few permanent residents and a number of vacation homes rented out by tourists.  The tourists have had an unfortunate habit of adopting dogs from the pound and, once they have to return to the city, leaving them abandoned on the island.  With little natural prey on the island, the growing pack begins attacking anything it can to fend off starvation.

The first victim is store owner Hardiman's (Richard B. Shull) horse, but soon the dogs begin threatening the nearly blind McMinnimee  (Delos V. Smith Jr.) in his own home, attacking and killing him on a particularly stormy night.  Jerry's own dog is attacked, and he finds himself and his stepsons (Eric Knight, Steve Lytle) threatened by the mangy leader of the pack.  He originally thinks it is only one dog, but quickly realizes that it is an entire group.  To make matters worse, the storm has knocked out communication with the mainland.

This becomes critical due to the presence of Jim Dodge (Richard O'Brien), a rich banker who is on vacation with his wife Marge (Bibi Besch), his son Tommy (Paul Willson) and his bank partner Walker (Ned Wertimer).  Also along is Lois (Sherry E. DeBoer), with whom Jim is hoping his son will form a bond with.  The vacationers begin concerned after Tommy and Lois go out for a walk and don't come back.  Tommy gets chased over a cliff, while Lois finds one of the worst hiding places ever.  Jim's vain efforts to kill the pack himself also result in his death.

The remaining survivors wind up holed up in Hardimer's shop while the crust Cobb (R.G. Armstrong) tries to make for the mainland in a rowboat to get help.  In the end it comes down to one last desperate bid get rid of the threat and save as many lives as possible.

I was afraid that this would be at about the level of a television movie, but direct and screenwriter Robert Clouse decided to make the kills as graphic as they could afford.  The lead dog is definitely frightening, and all the dogs are shown to have some intelligence due to formerly being domesticated animals.  Also, rather than the big massacre scene most of these were known for, it quickly turns into a siege film, only with canines instead of zombies or home invaders.

There are still many problems.  Other than Cobb living, there turns out to be no real point to his journey, nor any last minute rescue.  There is also the use of slow motion in many of the attack scenes, which unfortunately reminds me of movies like Night of the Lepus.  I have never scene slow motion really add any tension, or anything to the movie, unless it's the doves in a John Woo film (or the original Blade Runner, for that matter).  It's a pity since Clouse, when films the attacks straight on, does a good job of hiding the stuntmen working with the dogs and keeping things tense throughout.  He didn't really need to add any unnecessary tricks.

Joe Don Baker is solid in this, as is the rest of the cast, even though the banker and his gang play the annoying stereotype of bumbling idiots whose only function is to make it easier for the dogs to get to their lunch.  It's what you expect from a gathering of character actors.

Also released as The Long Dark Night, this isn't a movie you are going to see pop up on TV too often or even be on anyone's list of favorite horror films.  Still, it has some tension, and delivers much more than Grizzly, Day of the Animals, Mutant or any number of movies of the same genre.