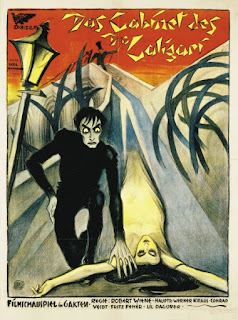 Everything has an origin story, and the origin of the horror film largely lies with The Cabinet of Dr. Caligari.  Yes, The Golem did come out the same year, and there were other movies that had suspense plots, and technically there is nothing supernatural that happens in Caligari.  Still, many of the elements one expects are here.

It is also no surprise that this came from Germany.  While Hollywood and Great Britain began releasing more suspense films throughout the 1920s, it was from the Weimar Republic that we got a number of the most revolutionary bits of cinema.  While Sergei Eisenstein may get accolades for editing, camera movement and a number of other innovations, and D. W. Griffith actually brought us the feature film, thematically Germany gave us the seeds of many of our popular genres.

Francis (Friedrich Feher) sits on a park bench with another man, discussing that there are spirits all about.  A woman (Lil Dagover) walks by in a ghost-like fashion, and Francis imparts that she is his fiancee.  He begins to tell the story of how she fell into such a state.

A small German town is about to have its yearly fair, and a strange man named Caligari (Werner Krauss) arrives to do his show, which involves somnambulist Cesare (Conrad Veidt).  At first he is treated rudely by the town clerk, but he is allowed to set up his tent, which quickly becomes a popular attraction.  The first night of his run, however, coincides with the town clerk's murder by stabbing.

Francis and his best friend Alan (Hans Heinrich von Twardowski) check out Caligari's act on the second night, which largely involves Cesare being awakened so he can tell the audience's fortune.  Alan asks how long he will live, to which he is told will be dawn.  The friends laugh it off and head home, meeting Jane (the ghostly girl from the beginning) on the way.  They admit that they are both in love with her, but vow not to let it ruin their friendship.  Unfortunately, that night, Alan is murdered in a similar way to the town clerk.

Curious about Alan dying so soon after the prophecy, Francis and Jane's father (Rudolf Lettinger) go to Caligari's trailer to investigate.  The Doctor is reluctant at first, but relents.  During their investigation, they are informed that the murderer has been caught trying to murder an old woman the night before.  The murderer (Ludwig Rex) admits to trying to kill the old lady, but states he was doing it as a copycat of the first two, figuring he would get away with it.

Jane goes to visit Caligari's trailer, and Cesare becomes enamored of her.  Dr. Caligari, however, sends him to kill her.  Francis, after hearing the murderer's confession, keeps a vigil on Caligari's trailer to see if Cesare leaves.  Seemingly he does not, but Jane is attacked and, instead of killing her, Cesare makes off with her over the rooftops of the town.  He is chased, and eventually drops the unconscious Jane and runs off into the woods.  Meanwhile, Caligari is confronted, and it is found that he had a dummy in Cesare's cabinet throughout the night, so that observers would be fooled.

Caligari flees, and Francis gives chase, following him to an insane asylum.  At first thinking Caligari was an escaped inmate, Francis soon finds out that he is instead the director of the sanitarium.  An investigation by Francis and the director's colleagues finds that he became obsessed with an 18th century Italian doctor named Caligari, who had a somnambulist named Cesare, whom he used to commit murders.  Wanting to see if he could do the same thing, opportunity presents itself when just such a case is brought to the asylum, and the director decides he must become Caligari in order for his experiment to work.

Armed with this knowledge, Francis vows to bring the Doctor to justice and end his reign of terror.

I have seen this movie a few times before, in various qualities of prints.  I find I was fortunate enough to finally see it as close to the way it was originally intended with my latest viewing.  It had the original German title cards, as well as the different tints for day, night, interiors, etc.  If you are not familiar with silent cinema, it was much different even from what became popular in the 1930s.  Many of the movies were in color, or had various tints to alter mood or time of day, at least for their major showings.  The black and white versions often seen are the copies that survived.

It is also worth noting that, although the language barrier wasn't a factor in silent cinema, the U.S. version of The Cabinet of Dr. Caligari unfolds the story a bit different, introducing him more in the way that the director's books introduce the real Caligari.  The titles, and some of the dialogue, are different, in a seeming effort to make some of the stranger parts of the movie make more sense.  Needless to say, I like the original flow of the movie best.

Werner Krauss is an early version of the mad scientist, pouring over old books instead of dwelling in a room full of beakers.  His leering closeups and fake, crawling gentility are quite jarring, and it is made clear that the man is quite insane.  Francis plays a typical silent movie hero, running willy-nilly into battle, with Friedrich Feher deliciously over-acting everything (which is a compliment in this case; again, silent films were quite different).

The star, though, is Conrad Veidt as Cesar.  Veidt would move to the United States after Adolf Hitler rose to power (as would many famous German actors and filmmakers), and played a number of respected roles, most notably as Major Heinrich Strausser in Casablanca.  Here we see him in his youth, dressed head-to-toe in black, with wide, dead, staring eyes and creeping through the oppressive sets with ballet-like grace.

The sets, largely made of canvas and paper and filmed from strange angles, are as much a star of the film as any of the actors.  They came about for budget reasons, the film largely being made in a small soundstage and the electricity situation being erratic at best.  Thus the film is as much a moving painting, with leaning angles, strange perspectives and streaks of light and shadow painted on.  If anything it hints at the mental state of the person telling the tale, but director Robert Wiene used the same techniques in later, non-horror films, like his version of Crime and Punishment.

As with most successful films of the time, there were efforts to redo The Cabinet of Dr. Caligari as a sound film in the 1930s in Hollywood, but Wiene died in 1938 and further efforts to do a remake, or a director sequel, fell through.  It's probably a good thing that these efforts came to naught, as many of the elements that make this film so wonderful were circumstances and situations that could not be purposely duplicated.  It stands alone in its own world, but even watching it 97 years later, it still maintains the power it had at the time of the release.