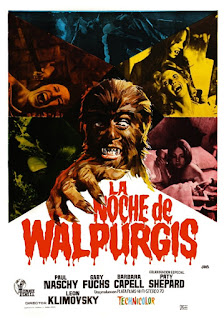 I just need to mention that it was a major Paul Naschy fan that got me into the October Horror Movie Challenge, as well as (in a roundabout way, not directly) ended up with me doing this review blog.  I'm a big more willing to review mainstream films as well as the obscure exploitation and horror films, but I never meant to imitate his blog anyway.  Still, I'm surprised that it has taken me this long to review one of Naschy's werewolf movies.

Paul Naschy was the pseudonym for Jacinto Molina, a Spanish actor and director who not only did horror films but a number of different genre and mainstream movies as well.  He was extremely popular in his home country, but is still underappreciated elsewhere.  This is in some ways a good thing as his movies don't end up getting overplayed around Halloween.  The problem is, because of the way they were distributed, sometimes there will be a dozen titles for the same film, and the way it is edited will have a major effect on one's enjoyment.

If you are getting into Naschy's films, most likely (and because they are so numerous and got international distribution) start with his films that featured Count Waldemar Daninsky.  While unrelated, the movies all revolve around a man who has been cursed to be a werewolf.  The makeup and some of the plotting is similar to the Lon Chaney Jr. films, while the atmosphere is often a blend of Mario Bava, Hammer and American International.  While writing the script for many of them, and being the star, there is a variation in quality due to a number of directors.

Since the series itself is connected only the character, and not an ongoing plot line, La Noche de Walpurgis (on DVD as Werewolf Shadow in the U.S., but also known here as The Werewolf vs. the Vampire Woman) is a good place to start, even if it is the fifth movie in.  It was his most successful in Spain and elsewhere, and one of the prime examples of how Naschy approaches the genre.

We start in Austria where Dr. Hartwig (Julio Peña) and his assistant are doing an autopsy on Daninsky, who has been shot with silver bullets by the villagers.  Not believing the stories, Hartwig removes the bullets, on the night of a full moon, no less.  Daninsky awakes, transforms, and kills the men.

In the south of France Elvira (Gaby Fuchs) and her friend Genevieve (Barbara Capell) are traveling to a monastery near a remote village.  Elvira is doing a thesis on black magic, specifically surrounding the tales of Countess Wandesa Dárvula de Nadasdy (Patty Shepard, a woman who was claimed to be both a vampire and high priestess of Satan.  When the girls get lost and their car runs low on gas, they encounter Daninsky, who is renting an old mansion near the monastery.  He invites them to stay until his handyman Pierre (José Marco) stops by and can get them into the village.

The first night Elvira is visited by Daninsky's sister Elizabeth (Yelena Samarina), who warns her of his nature.  Daninsky apologizes for not mentioning her before, and explains that she is insane, but harmless, and he largely rented the mansion to keep her isolated.  While staying with him he agrees to help the ladies find Nadesdy's tomb, which they succeed in doing.  Of course, the first thing Genevieve does is pull the silver cross from the corpse's chest, cutting herself in the process and awakening the Countess with her blood.  Genevieve is attacked that night and turned, and Elizabeth is attacked as well.

Daninsky is able to take care of Elizabeth's body before she turns, but Genevieve returns to claim Elvira.  He helps take care of her as well, but the Countess goes into hiding.  Meanwhile, the full moon comes around, and without Elizabeth to chain him up, Daninsky transforms and begins to terrorize the countryside.

The villagers start to turn against him, suspecting that he is responsible both for the werewolf murders and the young ladies that are turning up drained of blood.  Elvira begins to fall in love with him, which he hopes may fulfill the prophecy that if the silver cross is stabbed into his chest on the night of a full moon by one that he loves that he may be free of his curse.  The problem is the cross may be the only way of stopping the Countess before she makes a sacrifice on Walpurgisnacht, thus bringing Satan back into the living world to dominate the Earth.  When Elvira's boyfriend Marcel (Andrés Resino) shows up and fails to take her away before the Countess can strike, Daninsky must save them both from the Countess and from himself.

I have not seen very many of his movies, but Paul Naschy's films so far impress by having rather straightforward plots.  He did have a bit more of a budget to work on.  In fact, this was a major Spanish production for the time, release on 70 millimeter film and featuring a stereo soundtrack, even though it got released cheaply in mono almost everywhere else.  I think more people are familiar with the work Jesus Franco, and may expect some of the strangeness and meandering plot lines he brings to his films, but Naschy is not trying to be as outrageous.

Still, we're looking at great makeup work both for the werewolf and for the vampires, even if their teeth are at times a bit laughable.  I do love the way director León Klimovsky filmed the vampires, usually in slow motion and almost seeming to float.  It's a simple effect, but carries much more weight than having them turn into bats and what-not.  Unfortunately, he does use day-for-night shots, which often makes it confusing whether or not something is happening during the day.

Paul Naschy himself is great in the role he created.  Although he is often called the "Lon Chaney of Spain" (I believe they're referring to Senior, in this case), he does avoid making Daninsky too much like Chaney Jr.'s Larry Talbot.  Talbot was always a sad sack kind of character, but quite likable and a decent human being.  Daninsky changes personalities from film to film, sometimes being the tragic hero and sometimes an arrogant villain.

Gaby Fuchs and Barbara Capell do what they are supposed to do, which is look beautiful and, with the former, provide the love interest and potential savior.  It's always hard to get a grip on acting in older European films, since even when in watching them in the language of the country they came from, most of the actors are dubbed because they typically speak their lines in their native language and come back to fill in (when possible) the soundtrack for the different regions where the movie will be released.