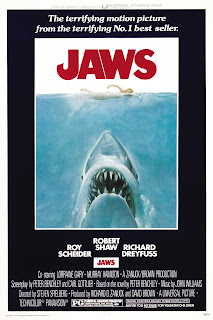 To understand how different things were only 40 years ago you only need to watch Steven Spielberg's classic Jaws.  Hollywood in the late 1960s and early 1970s was experiencing something close to what it is experiencing today: apathy.  Sure, some movies made a big splash, but for too long the major studios had been interested in the epic event movies with casts of thousands.  With economic malaise, an unpopular war and (by the time this movie was made) a crushing gas crisis, audiences weren't exactly in the mood.

This is the exact atmosphere that let directors like Spielberg thrive.  The 1970s became a second golden age for Hollywood not because of the studios sinking tons of money into big projects, but because they took advantage of smaller films that ranged from shoestring to moderate budgets, with the knowledge that most of them would make a profit.  They also largely backed away and let directors do what they wanted.

Steven Spielberg had already had moderate success with the TV movie Duel, which involved a milquetoast motorist being terrorized by a psychopathic truck driver, and had a future film under his belt with the chase comedy Sugarland Express.  By all accounts Jaws was a difficult production and, with the frequent breakdowns of the mechanical shark, it's not surprising that Spielberg in the end employed much of what made Duel effective: little is revealed of the antagonist, and then only when necessary.  Through much of Jaws the shark might as well be the proverbial beast that stalks just outside the light of the campfire that takes the occasional child.

Also, for those used to many of the family-friendly films that Spielberg did later in his career, it is to be noted that Jaws is a brutal film.  Rarely are children killed on screen in American films these days, and when they are it is typically off-screen, and not in a fountain of blood in front of his mother and hundreds of spectators. It needs to be said that the PG rating used to be a warning, not of mild swearing, but of the fact that you might have to explain some things to your kids afterward as well as keep the light on for them - or, in the case of millions of kids and adults after this film came out, remind them that sharks don't like chlorinated swimming pools or small ponds.

Martin Brody (Roy Scheider) is a former New York police officer who now serves as chief of police of the small beach community of Amity, which serves as a major New England tour resort during the summer.  After a girl goes for a late-night swim and is violently killed by what is an apparent shark attack, Brody decides to close down the beach until the animal can be dealt with.  Mayor Vaughn (Murray Hamilton), however, reminds Brody that the town thrives on summer tourist dollars and convinces him and the corner to label the death as an accident.  This all changes after Alex Kintner (Jeffrey Voorhees) is attacked by the shark in front of the entire community and tourists, leading to a panic and offers to kill the shark.

The main offer comes from the grizzled fisherman Quint (Robert Shaw), but his aid is at first rejected.  Brody decides to take matters into his own hands and brings in Hooper (Richard Dreyfuss), an ichthyologist who specializes in sharks.  At first the town seems relieved when the shark is seemingly captured, but it turns out to be the wrong one, leading to an unlikely partnership between Brody, Hooper and Quint as they go after the real culprit: a 25-foot great white.

You would think that after multiple viewings, parodies, references and three mediocre sequels that the original movie would have lost its bite over the years.  On the contrary, it shows just how practical effects and clever use of stock footage is more convincing than CGI in most cases, even if said technology can give you an entire tornado of sharks.  As said before, the difficulty with working with the mechanical shark itself led, by necessity, to it being used judiciously, reducing the times that someone would possibly be pointing and laughing at the screen if it was used to the point where it was an obvious prop.

Spielberg himself is commended for cutting Peter Benchley's story down to where it focuses largely on the shark and the attempts to kill it, while Scheider, Dreyfuss and Shaw bring their characters to life.  There were tons of animal attack movies around before and after, and these actors could have just phoned it in and collected their paycheck.

The result of Jaws and, two years later, Star Wars, was the beginning of something that would become a staple in Hollywood: the summer blockbuster.  From these humble beginnings come the bland, cartoonish event films of today, meant to make a quick buck while everyone is in vacation mode.  And, like before, one can only hope that will lead again to films like this, made by desperate young directors trying to make a name for themselves and succeeding beyond their wildest dreams.