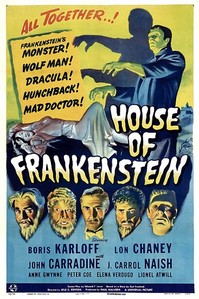 If there is one thing I have learned when trying to watch this entire series it's that either Universal couldn't care about being consistent with a story, audiences weren't paying attention, or both.  It's also possible that by this point where we have the sixth (and technically last) film in the Frankenstein series, combined with the third Wolf Man movie.  And, just for added effect, we have a cameo by Dracula.

Also, by this time, Lon Chaney, Jr. seems to be the only one interested in reprising his role.  We do have Boris Karloff back, but not under the makeup, and Bela Lugosi was off in a traveling production of Arsenic and Old Lace.  That means he is not the monster either (he played the role in the previous entry, Frankenstein Meets the Wolf Man), nor is he Count Dracula.  Instead, we are left with a sometimes enjoyable, sometimes laughable mashup, where it seems the only thought was to get as many monsters on screen and rush the movie into theaters as soon as possible.

Doctor Gustav Niemann (Boris Karloff) is a scientist who had a lab in Visaria, where he was arrested for transferring the brain of a human into a dog.  A former assistant to Henry Frankenstein, he looks forward to getting out prison one day to get revenge and to finish his work.  His chance comes during a heavy storm when a lightning strike destroys the walls surround his cell and that of his hunchbacked neighbor Daniel (J. Carroll Naish).  They escape, and run into the traveling circus of one Bruno Lampini (George Zucco), whom they help get back on the road, but soon dispatch when he won't head to the town of Riegelberg.

The reason for his visit is to get revenge upon a man name Hussman (Sig Ruman), the former burghomeister of Visaria, and one of the men responsible for his imprisonment.  Posing as Lampini, he originally intends to do the murder himself, removing the stake from what he assumes is a fake skeleton of Dracula.  Only, the skeleton is not fake, and the Count (John Carradine) awakens.  He tries to force Niemann to do his bidding, but the doctor's will is too strong.  Instead, they strike a deal, where Niemann will protect Dracula's coffin and the vampire will do the dirty work.

Dracula does as he is bid, but also tries to convert Hussman's daughter-in-law Rita (Anne Gwynne) by giving her a ring that allows her to see the barrier between life and death, and brings her under his sway.  When Hussman's body is discovered by his son Carl (Peter Coe), an alert goes out and Dracula is pursued.  Niemann doublecrosses his partner, locking his coffin and leaving him to die in the sunlight.

Niemann and Daniel then travel to the town of Frankenstein, where they are immediately told by authorities to move on.  They prepare to do so when Daniel sees a young Gypsy woman named Ilonka (Elena Verdugo) being attacked by another man.  Smitten with her dancing, he rescues her, and Niemann agrees to take her along.  At Frankenstein's ruined castle they discover the ice caves beneath, with both Lawrence Talbot (Lon Chaney, Jr.) and the Frankenstein monster (Glenn Strange) frozen.  Niemann thaws them out, and Talbot agrees to show him where Frankenstein's diary is if he will agree to find a way for him to die once and for all.

Heading for Visaria, Talbot agrees to drive, and soon starts attracting Ilonka's affections, much to Daniel's dismay.  After the lab is prepared and the experiments begin, Daniel wishes for his brain to be transferred into Talbot's body, but Niemann has different plans involving revenge against a former assistant and another who testified against him.  His delays allow Talbot to change, bringing the wrath of the villagers when bodies start turning up with the tell-tale sign of being attacked by a werewolf.  They are not too happy to find out that Niemann is back, either.  However, with Ilonka's help, Talbot may finally find some peace.

There is quite a lot of good to be found in this movie.  I quite liked the beginning, as John Carradine plays an interesting Dracula.  Surprisingly, they didn't have him behave like Bela Lugosi, but instead his brief time on screen allows him to make the Count his own.  It's another one of those situations where throwing in the extra monsters was not necessary.  They could have made a pretty decent (if not too original) Dracula sequel and had done with it.

Boris Karloff brings a spark to everything he is in, so Doctor Niemann is an excellent villain.  He is the closest thing we have to an actual Frankenstein, but it sounds like his experiments are more akin to those of Dr. Heiter from The Human Centipede.  It's no surprise that even his assistants turned against him.  Daniel is a sympathetic henchman, and J. Caroll Naish plays him not as specifically evil but more as someone poisoned by circumstances.

As for the other monsters, Lon Chaney, Jr. is still the same old Eeyore version of a werewolf, where Glenn Strange is given next to nothing to do as the creature.  In fact, the only reason it even seems to have the name Frankenstein, or any reference to the previous movies, is to coast on the fading glory of what began as a strong series of movies.

For the record, the castle that was destroyed when the dam was blown up (in Vasaria, no less - yes, the different spelling is on purpose) is now suddenly back in the village of Frankenstein, where the monster and Ygor fled from back in The Ghost of Frankenstein.  Visaria, or Vasaria, is where the two previous films took place, and where the castle and dam should be.  I'm also wondering exactly how cold things are under that castle, as the monsters are flash-frozen like mammoths.  At least Dracula's presence makes a bit of sense.

Still, sense is not the high point of the Universal monster pictures by this time, and it is fitting that after one more serious attempt at a mashup (1945's House of Dracula) they just gave up on trying to be serious and made Abbott and Costello Meet Frankenstein - which, though not an official sequel, finally redeemed a number of the series.