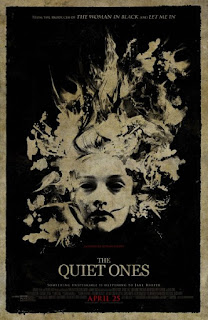 Hammer Films has been trying to play on their past reputation and become relevant again in the horror genre.  Sure, Hammer did more than horror in its heyday, but that's what they're known for, so you can't really blame them. They even had a bit of success with The Woman in Black.

Still, with Universal rebooting its entire monster franchise for the monster age, it leaves no room for Hammer to do what it was best at: reinterpreting those monsters themselves.  And, although they have a huge range of British stage and film actors to choose from, they have yet to find a modern day Christopher Lee or Peter Cushing, nor do they have any directors like Terence Fisher to tap.

Unless they have more successes going forward, it leaves them producing backwater copies of popular films like The Conjuring, which is essentially what The Quiet Ones is.

It is 1974, and Professor Joseph Coupland (Jared Harris) is trying to find a cure for mental illness.  The subject of his experiment is a young lady named Jane Harper (Olivia Cooke).  Completely unaware of most of her childhood, she was passed from foster family to foster family, with things often turning sour once strange events began to happen.  She believes she is possessed, but Prof. Coupland thinks that if he can have her manifest her illness in the form of what is traditionally called a poltergeist, then he can channel it into an inanimate object and cure her.  His previous experiments with a boy named David Q (Aldo Maland) were incomplete once his family intervened.

Aiding the professor in his experiment is technical wizard Harry Abrams (Rory Fleck Byrne) and his girlfriend Krissi (Erin Richards).  Brian McNeil (Sam Claflin), an amateur filmmaker, is recruited by the professor to document the proceedings.  Trouble erupts almost immediately when the constant complaints of neighbors and police visits to the house where Jane is kept result in the University pulling funding for the project.  The group relocates to an isolated country house to continue.

At first it seems like Coupland's efforts are in vain, but more and more Jane starts communicate with an entity called Evie, who takes the form of a doll.  Coupland has a doll purchased in which Jane, in the end, is to put Evie, but Jane states it is wrong and starts to make it more into the likeness that it should be.  She also begins to become more attached to the entity, much to Coupland's frustration.

Brian begins to grow attached to Jane and question the Professor's methods, as most of what he has seen can be explained away by tricks.  He soon changes his mind when a demonic sigil appears on Jane and, upon researching, finds that it is related to a Sumerian demon that was worshiped by a group of cultists in the 1950s, believing that a girl named Evie Dwyer held the power to bring the demon to physical form.  Evie had died in a fire with the rest of the cult, so it happens to that the entity is not of Jane's creation.

At the beginning it is stated this was based on real events, which immediately gets me doing some research, as the "real events" claim on many horror films (or movies in general, for that matter) is specious at best.  No surprise here, but even the supposed photos of the "real" event at the end are made up.  There is not the build-up of the Conjuring films with many different events culminating in a big battle (largely due to budget), but this is just one more thing they have in common.

What it is based on is the Philip Experiment, conducted in 1972 in Toronto.  In that case a group of parapsychologists attempted to create an entity named Philip Aylesford, a spirit from the 17th century who had died at the age of 30.  They made up an entire backstory and personality, and attempted by sheer will to bring the entity to reality.  They got some knocking and table levitating, but nothing really that the scientific community, nor Hollywood, could really use.

Truth is, The Quiet Ones isn't all that bad.  It has a decent atmosphere, even if its mashup of The Conjuring and Paranormal Activity is rather apparent.  The good will it does build up is undercut with the few CGI scenes, which look like they weren't even properly integrated with the film.  I will give them a bit of a pass on this due to the budget (only $200,000, per IMDB).  Still, they could have done without them and nothing would have been lost from the story.

Jared Harris is probably the best of the actors, playing the obsessed professor, but he is just making the best of a stock character.  Everyone else does the best they can, but honestly it boils down to possessed girl, white knight, nerd and damaged sex kitten, and nothing much else.

Hopefully if Hammer can get decent budgets in the future they can do more than play off the reputation of better movies.  Even though it can't touch the Universal monsters at this point, perhaps remaking some of their lesser-known features could help revive them.  If you're going to play off your reputation, might as well do it right.