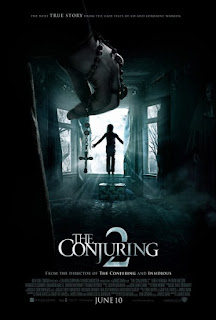 Both The Conjuring and this movie creates some mixed feelings for me.  I know there are many who would not agree, but I think James Wan is one of the best horror directors we have had in a long time, and he is also good at getting other people to work on the projects he cannot.  Not everything he turns out is gold, but it is often interesting and almost always fun.  It's something the horror industry has needed for a long time, as many of the name directors we toss around are either past their prime, retired, dead or have long since moved away from doing horror as their primary genre.

The reason the mixed feelings come in is because of Ed and Lorraine Warren.  I have been interested in ghosts, psychic phenomena and everything else surrounding the paranormal since I was a kid.  I naturally have become more skeptical as I got older, but the truth is that I have seen and experienced things and I remain in many ways a believer.  I am, however, very scientifically minded, and wish that the paranormal would be taken more seriously by the scientific community, so that we may get down to what exactly is.  Unfortunately, they spend so much time trying to prove things do not exist rather than trying to see if they do, and then working out what is fantasy in fact.  Part of the reason they do this is because of people like the Warrens.

It is probably fitting that saying that The Conjuring 2 is based on a true story has about as much veracity as anything connected with them.

It is 1977, and Ed Warren (Patrick Wilson) and wife Lorraine (Vera Farmiga) are conducting a seance with other researchers in the Amityville house.  Lorraine's spirit leaves her body and she relives the murder spree of Ronnie DeFeo Jr., a man who murdered his family in the house in 1974 and claimed that he was urged on by demonic voices.  After reliving the murders she follows a ghostly child into the basement, where she is confronted by a demonic nun (Bonnie Aarons) who shows her a premonition of Ed's death.  This leads Lorraine to suggest they take a break from any more cases, as she begins to fear for his life as the entity begins to stalk her at the family's home.

In the London neighborhood of Enfield single mother Peggy Hodgson (Frances O'Connor) lives with her four children Janet (Madison Wolfe), Margaret (Lauren Esposito), Billy (Benjamin Haigh) and Johnny (Patrick McAuley).  Janet begins having episodes that appear to be sleepwalking, but soon she is speaking in a deep voice, claiming to be the true owner of the house.  Poltergeist activity begins, with objects being thrown about.  When they flee to their neighbors the Nottinghams across the way, Vic Nottingham (Simon Delaney) calls the police as he believes someone is trying to play a prank on the Hodgsons.  While investigating, the police see a chair move across a room, and suggest that the family get in touch with a local priest.

The police report gets picked up by members of the media, attracting attention from paranormal investigator Maurice Grosse (Simon McBurney), as well as skeptic Anita Gregory (Franka Potente), who is sure that the daughters are faking it for attention, and that Peggy may be in on it as well.  News eventually reaches the Warrens as the Catholic church wants to do an investigation to decide if there is any truth to the matter.  Lorraine is reluctant to go, but Ed reminds her this is an exploratory investigation only, and that they will not be involved.

After arriving, however, it becomes clear that they will become involved, as both of them become friends with Peggy and Janet.  Through their investigations they find out that the spirit that is threatening Janet and causing the mischief is Bill Wilkins (Bob Adrian), the former owner of the house that died in it of a brain hemorrhage.  Not only does he speak through Janet, but manifests as himself and another entity called the Crooked Man (Javier Botet), claiming he does it because he likes to hear the family's screams.

The problem is, every single bit of evidence they get, from photos of the girls supposedly levitating to the tape recordings of the conversation with Bill Wilkins, can also be used to disprove the case.  It doesn't help that Janet is caught on video tape purposely faking the destruction of the kitchen.  Then there is Wilkins himself, who seems to be reaching out at moments and asking for help, as well as giving the Warrens clues on who the entity that Lorraine has been seeing really is.

As a horror film I enjoyed quite a bit of this, despite the fact it owes quite a bit of debt to The Exorcist.  James Wan has a way of angling the camera so that you never know exactly what you are seeing, and he doesn't rely on too many jump scares.  This helps make many of the sequences that are supposed to be frightening pretty much work the way they are supposed to.

This makes the times when more modern scare techniques are used stand out way too much.  There is a scene with a toy firetruck, and an unnecessary musical cue to remind the viewer that what they are supposed to be seeing is scary.  It's not something we need to be reminded of.  We have eyes, we know toys are not supposed to turn on by themselves and be pushed about by unseen beings.

What is effective about both Conjuring films is that the events, whether true or not, happened to real families, and many of the members are still alive today.  A number scenes take place when everyone is together or in broad daylight.  The beings involved are not content to hide under a bed or in the darkness.

The problem I have, movie-wise, with this one is that the Warrens were kind of shoehorned in and made to look like heroes.  From what I understand about the true Enfield case, they were just one of a number of investigators that showed up, and they were quickly told to go away.  Here they are the family's saviors, even going so far as to do home repairs.  When not being a handyman, Ed is shown singing Elvis songs to the kids while making googly eyes at Lorraine.  It is practically gag-inducing, especially with one of their last lines to Janet.

The entire demonic nun subplot is basically Wan setting the stage for another spinoff, like he did with Annabelle.  Within the context of the film it makes more narrative sense than to just suddenly say that everything we just witnessed for two hours was faked by a 12-year-old with great ventriloquism skills.

Despite its flaws the movie is still quite enjoyable and one of the better examples of modern horror.  Still, I can't help but feel unease at the Warrens being made Christian crusader heroes when all they did in real life is prey on those who either needed psychological help or truly had paranormal activity occur and had these self-aggrandizing buzzards show up.

That said, Patrick Wilson and Vera Farmiga have the chemistry to pull off the roles of a tight-knit loving partnership that can weather anything.  Madison Wolfe does well as Janet, as she is required to do most of the heavy lifting when it comes to the fright parts.  Frances O'Connor has a deer-in-the-headlights look one would expect for a parent that's gone through an awful divorce and then is stuck raising four children on one income, only to be confronted with an evil spirit on top of it.