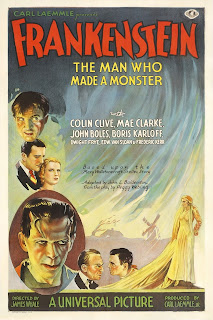 There are a number of core horror films (just like core horror writers) that set the tone for much of what would follow and, to an even greater degree, set the tone for what later horror directors would try to rebel against.  In fact, when Frankenstein and a number of its contemporaries (largely from Universal Studios) was released, horror was not really even a film genre.  There had been a number of films dealing with the supernatural, but genre-wise they fell into action, drama, suspense or mystery.

An earlier attempt had been made to adapt Mary Wolstonecraft Shelley's novel by Thomas Edison, but the 1931 adaptation by James Whale was much more successful, even if it largely threw out most of the book and went its own direction.  It largely came about because Whale was sick of doing war films and decided to do something different and, out of a pile of scripts, he pulled this one.

In the small Bavarian town of Goldstadt, at some point in the past, Dr. Henry Frankenstein (Colin Clive) and his hunchbacked assistant Fritz (Dwight Frye) watch as a body is interred.  After the gravedigger finishes his work, the pair go to work digging the body back up to transport to Frankenstein's laboratory, located in an old watchtower.  On the way they find the body of a hanged man and, upon cutting it down, Frankenstein realizes the neck is broken and the precious part he needed - the brain - is useless.  It is the last part he needs to complete his experiment.

As luck would have it, his old teacher Doctor Waldman (Edward Van Sloan) has a nicely preserved brain on hand.  Well, two, in fact - one normal, one belonging to a criminal.  Fritz is tasked with retrieving the normal brain.  However, he is startled by a sudden noise and drops the normal brain.  Fearing his employer's wrath, he grabs the criminal brain and hurries back to the lab.

It turns out that Henry has been neglecting other duties.  His fiancee Elizabeth (Mae Clarke) is concerned for his health, as is his best friend Victor Moritz (John Boles).  Elizabeth and Victor arrange a visit with Waldman, who warns them they will not be happy with what they find, but agrees to take them to Frankenstein's tower anyway.  They arrive on the critical night where, during a heavy lightning storm, the doctor is able to give life to the creature he has built (Boris Karloff).

Elizabeth and Victor return to Henry's home to convince his father, Baron Frankenstein (Frederick Kerr), that everything is all right.  The Baron has none of it and, under increasing pressure to get the wedding underway, decides to go and talk sense into his son.  At the lab, things are quickly getting out of hand, as the creature learns his new environment.  At first seemingly docile, his violent reaction to fire gets him banished to the cellar.  Waldman tries to convince Frankenstein to euthanize the monster, but he at first refuses.  He finally agrees after Fritz, who has been ruthlessly tormenting the creature, is killed and the monster violently attacks him shortly before the Baron's arrival.

As Henry recovers at his home, Waldman prepares to put the creature to sleep and start a dissection.  However, the monster has other ideas.  Waldman is killed, and Frankenstein's creation leaves the tower and starts to wander the surrounding hillside.  Things come to a head when a young girl named Maria (Marilyn Harris) is accidentally killed, and Waldman's body is discovered.  After the monster tries to attack Elizabeth, Henry and the rest of the village gather together to put an end to it.

Since Frankenstein, or the Modern Prometheus was not something on everyone's reading list, James Whale's movie came to represent the mainstream idea of the creature as a green, lumbering (and essentially moronic) corpse with pyrophobia.  In fact, the creature from the novel was brought to life by unknown means and was quite intelligent and cunning.  The creature was not even supposed to be green for the film - the makeup used was due to how it would show up in black and white, and was designed to make Karloff look more corpselike.  Not to mention that Victor Frankenstein suddenly became Henry because some film executive thought Henry sounded a bit more friendly.

Truthfully, I can live with the differences, especially since much of what Whale added in was brilliant.  From the expressionist angles to the entire set design of the laboratory, this version of Frankenstein inhabits its own world.  Sure, the world owes a lot to The Cabinet of Dr. Caligari, but that film was over a decade old by this point.  Whale had influences, but he was still bringing something fresh to the screen, and his previous movies meant that he knew how to keep a camera in motion, which was not always a mean feat at the time.

Colin Clive is the only actor (and this includes Peter Cushing) that has done Dr. Frankenstein justice.  He is not evil, simply misguided, and maybe even more than a little unhinged.  He plays Frankenstein in a way that doesn't abandon his humanity, but where you can often see his scientific side at war with his own morals.  Mae Clark is believable as someone who would put up with him for whatever her reasons may be - and she lets out one of the most memorable screams in history when attacked.

This was Boris Karloff's first major role, and he managed to portray the monster with both naivety and menace despite having no dialogue (no, not even "Fire bad!" in this one) and covered in tons of makeup.  His performance was memorable enough to get him an actual speaking role in James Whale's next horror film, The Old Dark House, as well as a memorable villain in another Universal classic, The Mummy.

Everyone else is good, with Frederick Kerr's Baron giving some comic relief, John Boles providing a bit of unwritten backstory in Victor's relationship with Elizabeth and Waldman being the important voice of sanity.

There are some flaws that stick out.  One is that the curtains or scrims the matte paintings are on are sometimes quite visible as such, and the other is a limitation of sound films at the time.  There is introductory and ending music but, like Dracula, Scarface and a number of other non-musical productions of the time, there is no incidental music, save the on-screen music during the wedding celebration.  It is less like a filmed play than other movies of its time, but still retains a bit of that quality.