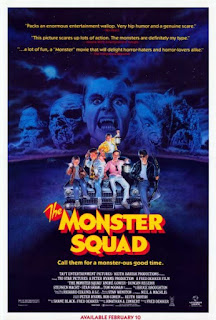 There are two teams when it comes to 1980s adventure films starring a bunch of kids going up against frightening, and somewhat overwhelming, odds: The Goonies and The Monster Squad.  Both films feature a group of outcasts going on an adventure (of course they both have a fat kid as well), and the situations the children are in are not of the type where they just fear grounding.

Keep in mind The Monster Squad never got the respect that The Goonies did, nor did it have Steven Spielberg behind it.  It did get a VHS release, but only one, and it got lost in the shuffle.  I know I saw it back in the 1980s when it got played on TV, but that was about it.  It also didn't get that good of reviews, but I still remembered liking it.

While I am firmly in camp Goonies when it comes to the two movies, it is nice that The Monster Squad has gathered the cult following that it has.  It is both a great example of a type of movie (save for It and Stranger Things, one of which was written in the same time period and the other that was inspired from these films) that doesn't show up much anymore, as well as one of the better get-togethers of the classic Universal monsters.

In 1887, Van Helsing (Jack Gwillam) enters Dracula's castle to put an end to him and his monster friends once and for all.  Unfortunately, things don't go as planned.  They do go back to sleep, but in another century the fight will begin anew.

In a small American town a club of 12-year-old outsiders led by Sean (Andre Gower) has formed based around trivia about famous movie monsters.  The other members include Sean's best friend Patrick (Robby Kiger), the frequently bullied overweight kid Horace (Brent Chalem), the younger kid Eugene (Michael Faustino) and, after coming to Horace's aid against two bullies, the middle-school aged Rudy (Ryan Lambert).  An auxiliary member, not officially allowed it because she's a girl, is Sean's five-year-old sister Phoebe.

A crew of a cargo plane flying over the town ends up dropping off a few sudden packages, one in the form of Count Dracula (Duncan Regehr), the other a crate containing Frankenstein's monster (Tom Noonan).

Sean's home life isn't the best.  His father Del (Stephen Macht) is a police officer, and his mother Emily (Mary Ellen Trainor) is not happy about the fact that he never spends time with the family.  A special night out is interrupted when a mummy (Michael Reid Mackay) goes missing from the local museum, and things get even stranger when a man (Jon Gries) comes into the police station claiming to be a werewolf and demands to be locked up.  He grabs an officer's gun and is quickly shot by the police, but changes into the Wolfman (Carl Thibault) on the way to the morgue.  He joins Dracula, the Mummy and, after the Creature from the Black Lagoon helps fish him out, Frankenstein's monster.

The next day Emily gives Sean a book she purchased at a yard sale that she says came from an old house in the town, and it turns out to be Van Helsing's diary.  Unfortunately, it's in German.  The boys decide to face their fears and visit a man they only know as the Scary Germany Guy (Leonardo Cimino) to help them translate it.  It tells of an amulet that contains concentrated good that, if it falls into the wrong hands, can tip the balance of good and evil over the wrong side.  Dracula himself made sure he came to the particular town as the amulet is hidden in the same house the diary came from.

Hoping to find clues, Dracula dispatches the monster to get the diary from Sean, ordering him to kill the children if necessary.  Instead, the monster quickly makes friends with Phoebe and the rest of the Squad, and even helps them in their quest to find the amulet.  Once successful, they do what they can to make sure they protect it from Dracula until after midnight, while they also find that getting a virgin on short notice to do a magical ritual is not an easy thing.

Stan Winston did the special effects, and the time-worn monsters updated to the '80s are quite impressive.  With the design they had I kind of wish they would have followed this up with a remake of Creature from the Black Lagoon while they had the costume hanging around.  As usual with these movies the makers pushed everything to the limits the budget allowed.

The main problem with the movie is that it feels way too rushed.  I guess a good portion was cut because director Fred Dekker was pressured to bring the movie in under 90 minutes.  Because of this some character development is left out.  They are building a pretty interesting world here, with a lot of humor, but there is barely any time for anything other than the most basic plot thread.

Even so, Duncan Regehr's portrayal of Dracula is considered one of the best.  It is one of the few times you get to see how strong and dangerous he really is.  He is one nasty villain, cold and completely inhuman.  Contrasting this is Tom Noonan's sympathetic portrayal of the Frankenstein monster, here able to talk again and, despite being referred to as an "old friend" by Dracula, none too willing to murder children just because he is told to do so.

The other monsters, though nicely done, are merely henchmen.  We do get an answer to the question of what would happen if you just blew a werewolf up, however.

Of the older kids, it is Brent Chalem as Horace that largely stands out.  Again, if more of the movie was left intact, his growth as a character may have made even more sense, but he does get to play the hero.  Also surprising is Ashley Bank, who is obviously having the time of her life on the movie set, and whose character turns out to be central to the plot and not just a cute, annoying younger sibling.

A note about this being PG-13.  Keep in mind that PG-13 was put in place originally because of uptight parent groups protesting that PG movies were getting too violent, so the MPAA came up with the rating to straddle the line between PG and R - think Gremlins or Poltergeist, two of the movies that were named in the complaints.  It's not the neutered, bloodless PG-13 of today, and contains a fair bit of gore, as well as some surprising death scenes.  This movie was aimed right at the audience that would want to see it, and there was enough to the movie to keep parents interested as well.