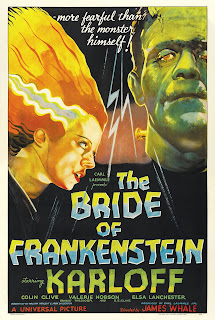 Sequels have been around for as long as there have been stories.  The Odyssey, after all, was a sequel to The Iliad.  That example isn't just pulled out of a hat.  It has also been a rule over the years that is rare that a sequel may be equal to, or even better than, the original.

As a story goes on, especially one quite removed from the source material to begin with, diminishing returns can be expected.  Four years after the original Frankenstein, James Whale had directed two more classic horror films, while Boris Karloff bad become a star in his own right.  He was pigeonholed as a horror actor, which he seemed to enjoy, but had avoided being typecast as a lumbering beast.  Neither had any reason for making a second Frankenstein film.  Still, the studio insisted, so Whale got something almost unheard of in early Hollywood: complete creative control.

That control led to one of the most unique horror films of all time.

We are back at the scene of the windmill.  Henry Frankenstein (Colin Clive) has barely survived being tossed off the side by his creation (Boris Karloff).  The windmill burns to the ground, and everyone is sure the monster is dead.  Everyone, that is, except for Hans (Reginald Barlow).  His daughter Maria was accidentally drowned by the monster, and he wants to make sure it is now ashes.  Against his wife's (Mary Gordon) wishes, he begins to sift through the rubble, only to fall through the floor into the well below.

It turns out his fears are correct: the monster is alive and well, having fallen through himself rather than burning in the windmill.  He drowns Hans and then, Hans's wife mistaking the monster for her husband, receives a hand up - which he returns by throwing her down the well with her husband.

While the monster again begins terrorizing the countryside Henry recovers and prepares to be married.  His peace is disturbed one night by the arrival of Dr. Pretorius (Ernest Thesiger), a former philosophy professor from the university where Henry studied.  He has been following Frankenstein's work, and was impressed enough to embark on his own quest to create life.

Henry agrees to meet at Pretorius's dwelling, and discovers that the doctor has indeed been successful, although on a smaller scale.  Rather than piece together dead bodies, Pretorius has experimented with growing human beings (and other creatures) from the atomic level on up.  He proposes the two work together to create a female version of the monster, however with a twist - the brain shall be one grown by Pretorius rather than trying to find one preserved from a corpse.

While the two make their plans the monster tries to make it on his own, but only succeeds on riling up everyone in the village.  He soon makes his way to the home of a blind hermit (O. P. Heggie), who accepts him and teaches him how to speak and act more human.  The creature is happy with the companionship until it is disturbed by two lost hunters who recognize the monster and try to kill him.  The resulting fight leads to the destruction of the Hermit's home and the creature fleeing to a vault below the cemetery after being briefly incarcerated.

It is here that Pretorius, involved in a little grave robbing with accomplices Karl (Dwight Frye) and Ludwig (Ted Billings), happens upon him and tells him of the plans to make him a mate.  Frankenstein, though, has had second thoughts, and has decided to leave on a honeymoon with Elizabeth (Valerie Hobson).  In order to secure his aid, the creature kidnaps Elizabeth.  In order to get her back Frankenstein agrees to return to the watchtower, which still contains his laboratory, and bring the new creature to life.

The experiment is a success, but too much so.  The female creature (Elsa Lanchester), unaware of what she is and what she is intended for, reacts with fear to the original monster, leading Frankenstein's creature to make one last fateful decision.

Despite being called Bride of Frankenstein, the female creature in question is only revealed at the end of the film.  Elsa Lanchester plays Mary Wollstonecraft Shelley in the prologue, and her part is larger than that of her iconic turn as the Bride.  It is still an effective performance, with the unique hairdo, birdlike movements and constant hissing.

Boris Karloff objected to having the creature become more sympathetic, as well as gaining the power of speech, but it is a good thing that James Whale overruled him.  He once again does a great job despite the discomfort the makeup and costume caused him.  While a number of the murders he commits are brutal and unnecessary, they are balanced by a number of misunderstood attempts to be a hero or just be normal.  It is still quite a touching performance despite the endless parodies and remakes.

Colin Clive is again great as Henry Frankenstein.  Even though he is given less to do, a good part of the manic character still comes out.  Unlike the first movie, however, there is a true villain in Dr. Pretorius, and Ernest Thesiger portrays him as a man who wishes to be less like God and more like the Devil, right down to sneering at "Bible stories" at one point - something that somehow got past the Hays Code.

There are a few flaws as usual, and this time unfortunately not technical.  Valerie Hobson is okay as an actress, but the character of Elizabeth has been cut down to a typical damsel in distress role.  Minnie (Una O'Connor), a servant of the Frankensteins, shows up as comic relief, but will most likely come across as annoying to most modern viewers.  Some of the acting can get a bit hammy as well.

I still somewhat prefer the first movie over this one, though it is only by the slightest margin.  I think the reason that Bride of Frankenstein is often thought of as superior is because it is more of what we expect from a movie nowadays: the pace is faster, technology had improved enough to allow incidental music (it doesn't hurt that it has a fantastic score) and it doesn't feel as much like a stage play.