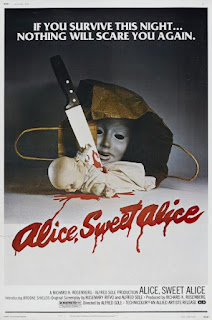 Today the masked slasher has become a cliche.  Halloween perhaps did it best, while Jason Voorhees managed to carve his way to fame with a hockey mask.  While The Abominable Dr. Phibes is probably the origin point for the genre, Alice, Sweet Alice is certainly responsible in its own way for what it became.

12-year-old Alice Spages (Paula E. Sheppard) is jealous of her younger sister Karen (Brooke Shields), who gets all the attention of her mother Catherine (Linda Miller).  With their father out of the picture, Catherine is forced to raise the two girls on her own, and Alice becomes more and more upset with the attention lavished on Karen, particularly by Father Tom (Rudolph Willrich) and the priests' caretaker, Mrs. Tredoni (Mildred Clinton).

It also seems that no one else likes Alice either.  Father Tom will not give her communion, her aunt Annie (Jane Lowry) thinks that she is evil and Mr. Alphonso (Alphonso DeNoble), their perverted landlord, thinks he can use everyone's distrust to get away with abusing her.  So, when Karen's first communion winds up with her strangled and set on fire, the suspicion begins to fall on Alice.

Her father Dom (Niles McMaster) shows up for the funeral and begins working with the police to figure out what happened.  He at first rejects the idea that Alice killed her sister, but after Aunt Annie is stabbed repeatedly and positively identifies the girl to the police, he has no choice but to go along with their plan of putting her into a shelter so she can receive psychiatric treatment.  Alice doesn't help her case, as she claims that it was her dead sister that attacked her aunt.

Dom is still not convinced the killer is Alice, but his research keeps turning up dead ends.  He even begins to suspect it may be his niece Angela (Kathy Rich).  He soon unfortunately discovers the identity of the killer, but is murdered himself for his effort.

The result of Dom's murder is that Alice is returned to the custody of her mother.  After Mr. Alphonso is killed, Detective Spina (Michael Hardstark), who has been investigating from the start, sees the killer.  Although the murderer gets away, Spina recognizes the person and, with the help of Father Tom and the other priests, sets a trap.

Problem is, although she may be innocent in some ways, Alice is still the troubled young girl her school and her aunt think she is.  The attack on Alphonso is precipitated by a cruel prank, while Alice and the killer share the same get-up and many of the same methods.  In the end everyone might just be right after all.

Originally called Communion, director Alfred Sole changed the name after the initial distribution deal fell through, fearing people would find it to be a religious film.  While Catholicism does play an important background, this has in common with numerous slasher films a connection with a holiday or birthday.  It is actually not a bad title, as the killer's motivation (if in fact the "real killer" was the one who truly murdered Karen) is revealed to revolve around the event.

Also, like most proto-slasher films, this relies more on atmosphere and tension than it does having the killer suddenly pop out of nowhere and knock off another extra.  The killing is brutal, but the false scares and sudden buildup are left by the wayside.  There is also an effort to make the whole situation make sense, especially when one wonders how the killer was certain places at certain times.  If Alice truly is a budding serial killer, then it would not be surprising that she would continue where she could and let the other person take the blame.

For a low-budget picture Alfred Soles did a good job of framing the action in the early 1960s.  Some '70s hair styles and backgrounds show up, so it was a bit confusing at the start trying to place the time, especially when I began by thinking it was a contemporary film until I saw a portrait of President Kennedy in an official position.

Linda Miller handles her role of Alice's mother with gusto, almost going completely crazy as she tries to convince others that her daughter is simply misunderstood, while still having to deal with the grief of losing Karen.  Jane Lowry is also notable as the uptight aunt who barks orders at everyone, including her intimidated husband Jim (Gary Allen), who turns out to have a backbone as proceedings go on.

Rudolph Willrich and Niles McMaster fill out the square-jawed hero combo of Tom and Dom.  There isn't much more there except boasting and machismo, and it gets neither of them anywhere when it comes to taking care of the killer.  The other main male presence, Alphonso DeNoble, is over-the-top creepy.  I was surprised when he was presented as a possible child molester, as when he was first introduced I thought it was a horrible stereotype of a homosexual.

This was Brooke Shields's first major role, and she is only in it for a short time.  Never really a great actress, she still gets to just be a young girl in this one and isn't really required to do much more.  While she was closer to the age of her character, Paula Sheppard was already 19 at the time the movie was made.  She still plays a convincing psychotic 12-year-old.  While her younger sister Karen is prone to histrionics, Alice is often cool and dangerous, and Sheppard plays her with the edge she deserves.