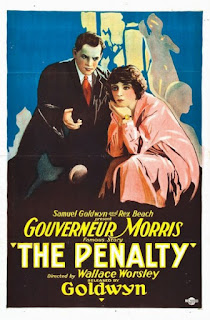 Normally when referencing Lon Chaney we are talking about Junior, who had a much longer career than his father did.  It was the original Lon Chaney, however, that pioneered makeup effects and techniques in film.  It didn't hurt that he was quite an actor.

Lon Chaney died in 1930, on the cusp of relaying his fame into talking films.  As makeup techniques advanced it would have been interesting to see what he would have done, far beyond the Universal monster canon that was popular at the time.  In fact, Lon Chaney films were treated as events, largely to see what he would do next.  One of the earliest in this line was The Penalty.

The up and coming Dr. Ferris (Charles Clary) is treating a child who has been run over by a wagon.  Thinking it is the right thing to do, he amputates the child's legs, but ignores the contusion on the back of his head as that is beyond his skill.  Dr. Ferris's father double checks everything and realizes that the legs did not need to be amputated.  He agrees to cover up for his son, telling the parents that it was a life-saving measure.  However, the boy by this time has come out of anesthesia, and hears the doctors' entire conversation.  He fails to convince his parents, and is accused of lying.

27 years later Blizzard (Lon Chaney) is the head of San Francisco's underworld, despite being a double amputee.  He solidifies his reputation when his goon Frisco Pete (Jim Mason) offs one of his wayward girls, Barbary Nell (Doris Pawn).  He uses her murder to keep his other girls in line, taking them out of the bars where he has them dancing and forcing them to make hats, while keeping one around as a favorite to work the pedals on the piano while he plays, and often killing them when he gets tired of their presence.

His sudden turn to hat manufacturing concerns Lichtenstein (Milton Ross), the head of the San Francisco branch of the Secret Service.  He sends in his operative Rose (Ethel Grey Terry) to infiltrate Blizzard's operation as one of his girls, and she quickly becomes his favorite.  She manages to discover a hidden passageway that leads to an operating theater, as well as too a well-stocked armory.  She is unable to get messages back to her boss, but is also reluctant to as she is falling for the crime boss.

Blizzard has his eyes on a different prize.  Two, actually.  One is revenge against Dr. Ferris, which he commences by making sure he is the model of Barbara Ferris's (Claire Adams) sculpture of Satan.  He hopes to win her love and trust and pull her away from her fiancee Dr. Allen (Kenneth Harlan), who is her father's assistant.  Eventually her father comes to visit and recognizes Blizzard as the boy whose life he ruined, but Blizzard treats it like there has been no loss.  However, he quickly becomes enraged when, as the sculpture comes to completion, she rejects his advances.

Pushing his plans forward, he brings his partner, and union organizer, O'Hagan to town.  His ultimate plan is to have O'Hagan recruit a number of foreign workers to cause chaos in the San Francisco suburbs, drawing the police to the outskirts of the city so that he can loot the mint and the banks before disappearing.  He only needs two things to carry it out: Dr. Allen's legs, which, through threats against Barbara, he plans to have Dr. Ferris transfer to him.

The Penalty is largely a crime film, but it still has many elements of what would become horror staples - mainly, the character who would be good if not for their loss or deformity, and the extreme lengths they will go through to make themselves whole and take revenge.  Blizzard is intelligent and wise in the ways of the world, and he happily compares himself to Satan.  Surprisingly the Milton quote doesn't pop up.

Some of the limitations of film-making are evident, but director Wallace Worsley does what he can to keep things moving throughout, even if he is still stuck many times with a stationary camera.  He frequently includes Blizzard's fantastical dream sequences, and his imagined takeover of San Francisco looks fantastic for the time (I wonder what they blew up, since it didn't look like a miniature set).  It also frequently cuts between flashbacks as well as scenes comparing the different faces that Blizzard puts on.

The story itself is melodramatic, but is retains interest through most of the film.  It has enough action that it may be a good place for someone to start when watching dramatic silent films.  Still, there are problems in the story telling itself.  Most of the story works, but the end does not.  I have no idea how the book, a 1913 pulp novel by Gouverneur Morrs, ends, but this has the feeling of something tacked on by the studio.  It unfortunately undercuts everything built up prior to provide a tragic ending.

While everyone plays their part, the point of this movie was to see Lon Chaney play, without camera tricks, a double amputee.  He achieved this by creating leather bucket-like fittings that bent his legs straight back against his thighs.  The penalty he paid was extreme pain and life-long muscle damage from playing the role.  For the doors it opened up to him, however, I'm sure he felt it was worth it.  When it comes to his acting, he was able to do just as much with his face in its normal state as when he went through the trouble to make it up.  He was a stage actor prior to going into film, and if he hadn't had the one-two punch of pneumonia and cancer 10 years after this movie was filmed, who knows what his later career could have been.