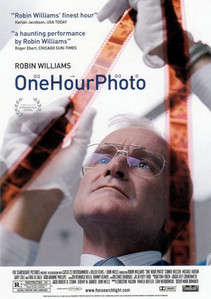 The foundation of humor is always tragedy.  That is why I am always surprised when critics stumble over themselves to praise a great dramatic performance by someone known for their comedic work.  Of course they can play it straight.  Depending on how your life is, however, why would you make a career of playing it straight when you have done that all your life to little or no reward?

For a movie like One Hour Photo, it does help that your lead actor, though a comedian, is also known to be a bit unpredictable in their own field.  Younger generations know Robin Williams from the movies he made, while I remember him as the alien Mork and for comedy routines that, while hilarious, often sounded like a homeless man screaming at you.  If it's funny, you can't help but laugh, but then feel a bit bad about the fact of who it is you are laughing at - especially since Williams was never shy about admitting his problems to the world.

I do think, for general audiences, that when Williams really decided to show that he was more than just a funnyman, it connected more than, for example, Adam Sandler in Punch Drunk Love.

Sy Parris (Williams) is a photo technician for a big box store called Sav-Mart.  Photographs are his life, and he builds his world around the photos that he sees go through his machine.  He becomes attached in particular to one family: Nina (Connie Nielsen), Will (Michael Vartan) and Jakob Yorkin (Dylan Smith).  Whenever they come in he makes an extra set of prints that he takes home and hangs on his wall, making a collage of their entire life for him to look at.

While Sy thinks the Yorkins have the perfect family life, things are getting tense.  Will is rarely around, spending a lot of time at work.  Nina thinks he has become neglectful to both her and Jakob.  Sy does try befriend Jakob in the friendly uncle kind of way, but it comes across awkward and somewhat frightening.  His one attempt to bond with Will fails miserably.  He has better luck with Nina, with whom he begins to sympathize.

He, however, has some personal troubles of his own.  His boss Bill (Gary Cole) gets upset over Sy berating a repair man for the film machine, especially after he makes a scene in front of customers.  Though Sy cares about the work he does, and has been at the store for over a decade, he is treated by Bill as nothing more than another low man on the totem pole.  He has so little regard for Sy that, when suspicions are raised about the print counts not matching, he has absolutely no problem firing him on the spot despite his service to the store.

Before he is fired, however, Sy recognizes the face of a woman named Maya Burson (Erin Daniels) who brings in some film to be developed.  Looking at the pictures on his wall, he connects the dots and realizes that she is having an affair with Will Yorkin.  A quick look over her photos, showing her and Will cavorting on a beach, confirms it.  Upset at Will's betrayal to Nina, he puts Maya's pictures in the envelope meant for Jakob's pictures he took with a disposable camera Sy gave him for his birthday.  He follows Nina and Jakob to observe the reaction, but is rather upset when, while he is watching the family have dinner, there is no confrontation between Nina and Will.

Sy decides to take some pictures of his own and bring them in for development, although Bill confronts him about even coming to shop at the store.  Sy's former assistant Yoshi (Paul Hansen Kim) bring the pictures to Bill's attention, as they turn out to be of Bill's daughter.  Bill calls the police, and after speaking with him Det. James Van Der Zee (Eriq La Salle) puts out an APB on Sy.  Upon entering his apartment, they find his wall of pictures, each with Will Yorkin's face now scratched out.  Fearing that the Yorkins may be in danger, they are given police protection, while Van Der Zee works to find out where Will is before Sy can get to him.

It is really hard to convey the sense of uneasiness that pervades this film.  Sy is socially awkward, and his attempts to reach out seem in many ways the classic set-up for a child molester.  In truth, he's a lonely old man with an unhappy past.  He is mentally unstable, but largely his obsession remains in his imagination.  It is only when his ideal is threatened that he begins to act in reality.

Writer and director Mark Romanek has included many clever references to photographers and cameras throughout, often framing shots as if they were still photos.  While all the camera and photography references may be nice, the underlying theme is the life we want versus the real life we have.  While 2002 was a time when things were switching over to digital, a few years later the family photo album (or the torturous vacation slide show) would be a memory.  Instead there is Facebook, where many people doe the same thing.  You look through old family pictures and you think that everything was perfect, same as going through someone's profile.  It often tells more about what the person wishes their life was like rather than the reality.

As can be expected Robin Williams gives the role all he's got, and it is one of his best.  Going from awkwardly toddling around to suddenly threatening people with a knife in seconds just shows the burning anger beneath his outwardly friendly demeanor.  Despite seeming like a nebbish he has been through a lot and is made of sharp steel - he is just too psychologically damaged to use it to his advantage in most cases.

Although Williams is essentially the victim, one can't help disliking the other two male leads even more.  Michael Vartan plays Will as an entitled jerk, and there is really never any explanation given for his affair other than he probably thinks it's owed to him.  Gary Cole plays almost the same character he did in Office Space, so much that the two could be brothers.  It's just this Bill, rather than being inept, is vindictive and gets noticeable pleasure from treating his employees like garbage.

Connie Nielsen doesn't do much more than play the distraught wife, while Dylan Smith does rather well showing that, in many ways, he is developing some of the same scars as Sy, but for different reasons.

If it wasn't for Robin Williams's performance this movie would kind of just be there - another morality tale that involves a little bit of a suspense element.  Instead, it's elevated, not to the level of a classic, but to a deeply disturbing look at a man who tries to desperately to escape his own reality and replace it with that of someone else.