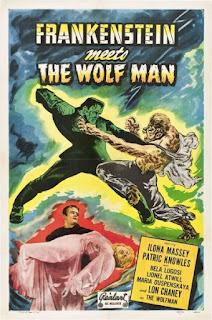 These days it is almost a given that, whenever possible and copyrights align, famous monsters will do battle.  Godzilla fought King Kong and then about every other monster under the sun.  Freddy went head-to-head with Jason.  Santa Claus once fought a demon trying to destroy Christmas.

Okay, so I'm taking things a bit too far there.  The most important thing to know is that Universal provided us with the first fiendish throwdown with Frankenstein Meets the Wolf Man.

There are a number of factors at work here.  First, this was released in the middle of World War II.  By this time we had real monsters to worry about, so it is no surprise that as Universal's rogues gallery inched past the decade mark that the studio would start providing lighter, more escapist entertainment.  The Wolf Man was the latest edition at that point, and unfortunately got short shrift when it came to sequels, as Universal had already decided that these were no longer going to be major releases, but instead b-reel entertainment.

So, instead of merely a sequel to The Wolf Man, we get a combined sequel that kind of provides us a fifth Frankenstein film, as the events are supposed to follow a year or two down the line from the end of The Ghost of Frankenstein.

Rudi (Dwight Frye) and Guno (Harry Stubbs) have decided to supplement their income by breaking into tombs and nicking valuables off the dead.  In this instance they happen to choose that of Lawrence Talbot (Lon Chaney, Jr.), who was killed four years prior.  Talbot, of course, was the Wolf Man, bitten by a werewolf and cursed to walk the earth forever, turning into a ravenous beast when the moon was full.  Expecting a skeleton, they instead find Talbot's body well-preserved under a covering of wolf's bane.  Rudi finds out the hard way that it's not nice to take things from the dead, while Guno high-tails it on out.

Lawrence makes his way to Cardiff, where he is found on the street half-dead with a severe head wound.  He is taken into the care of Dr. Frank Mannering (Patric Knowles), who is stunned at Talbot's recovery.   Inspector Owen (Dennis Hoey) is even more stunned to find out Mannering's patient was killed five years prior, and believes Talbot to be a liar.  It doesn't help that he cops to a recent murder of a policeman, claiming he turns into a wolf.  This gets him fitted for a straitjacket, which he easily escapes once he turns again.

Seeking help, he finds the old Gypsy woman Maleva (Maria Ouspenskaya), whose son was responsible for Talbot's condition.  She agrees to help him find a way to die so the curse can be lifted.  She knows of a doctor in the German town of Vasaria named Frankenstein, and agrees to take him there.  The journey is long, but they arrive and are not greeted warmly.  Turns out Ludwig is the one they are after, and he died in the fire of his estate.  Talbot is unable to make it to the castle ruins before changing again, and people in Vasaria start turning up dead.

Talbot wakes up beneath the castle ruins after returning to human form and finds Frankenstein's monster (Bela Lugosi) encased in ice.  He chips it away, and finds the creature to be very much alive.  His search for any surviving information from Frankenstein leads him to discover a picture of Elsa (Ilona Massey).  Talbot, going under the name Taylor, arranges a meeting with Elsa with the aid of Vasaria's mayor (Lionel Atwill), but she is not pleased to learn she is after her father's diaries.  Also, Mannering has been following the trail of murders through Europe, and has traced Talbot to Vasaria, intending to bring him back, still not believing the wolf story.  He does start to believe a bit more when the monster crashes the town's New Wine Festival.

Elsa accompanies Mannering and meets Talbot at the ruins, showing him her father's notes.  Mannering repairs Frankenstein's equipment, intending to use it to drain the life force from the monster and also from Talbot.  Instead, at the last moment, his curiosity gets the best of him, and he decides to give the monster its full strength back.  It wakes, attacking both Mannering and Elsa.  However, Talbot transforms and attacks the monster.

Again, this movie is plagued with continuity problems.  Ludwig's estate had largely been transformed into a modern medical facility, while now we suddenly have a crumbling castle outside of Vasaria, built near a dam.  The monster was supposed to continue to speak, and it was still supposed to have Ygor's brain, though it is now blind as it was at the end of the previous movie.  There is also an unneeded musical interlude.

The reason for the monster's lack of speech and stumbling around is never explained, as the scenes were cut.  It has been often stated that there was a problem with Lugosi's accent, which is ludicrous, since it still would have been Ygor's voice.  The more realistic explanation is that he still retained Ygor's determination to rule the world, and much of the dialogue was too close to that of a certain little dictator.

Which also leads to the 800-pound German eagle in the room.  Both The Ghost of Frankenstein and Frankenstein Meets the Wolf Man supposedly take place in contemporary times.  Whether Vasaria was supposed to be in Austria or Germany, it would definitely have been much different than it is portrayed.  Being escapist entertainment I am sure that there was a determination to ignore the war, as well as make Vasaria's location vague.  Looking back, it is rather weird.

I think Lon Chaney, Jr., is back in a role here that he is comfortable with, even if Lawrence Talbot is one sad-sack of a monster.  Bela Lugosi, on the other hand, was undercut and wasted, and a good deal of the monster's on-screen time is stuntmen rather than Lugosi himself.

Patric Knowles's part is largely to fill in for the lack of an actual Frankenstein other than Elsa and, while Ilona Massey isn't bad, Evelyn Ankers was much better.

The truth is if Universal had just let the Frankenstein series rest with Ghost, things would have been just fine.  A good part of this movie is a solid sequel to The Wolf Man, and even the mad scientist parts could have been left in without referencing the monster or its creator (or his sons).  It does lead to an exciting lucha libre style battle at the end, but that's really about it.  It's two-thirds of a great Wolf Man sequel, one third of a weak Frankenstein one.

And, man, can I sympathize with poor Talbot having to listen to that singing.