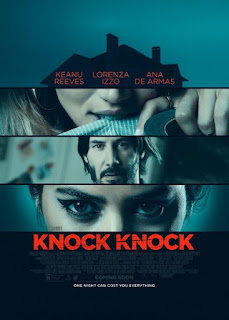 I have sometimes wondered if Keanu Reeves's acting has, at some point, become Keanu Reeves acting like Keanu Reeves trying to act.  I am sure he is aware at this point how his line delivery comes across and how difficult it is to take him seriously in any setting.

Not to mention I saw someone mention that it is possible that this entire movie was made by Eli Roth and Reeves just communicating by the words "bro," "dude" and "whoa."  What came out of this remake of 1977's Death Game makes me believe there may be more than a little truth in that.

Evan (Reeves) is a devoted father of two (Dan Bailey, Megan Bailey).  A former DJ turned architect, he lives in a fancy home in the Hollywood hills with his wife Karen (Ignacia Allamand).  Karen is an artist that has finally published her first catalog and is preparing for a gallery showing.  For a breather, however, she is taking the kids to the beach.  Unfortunately, Evan has some work to do and has to stay home.

While working a bad thunderstorm kicks up, and hears a knock on his door.  He answers it to find Genesis (Lorenza Izzo) and Bell (Ana de Armas), two young ladies who are soaking wet and have got lost while looking for a party that should have been in the area.  He agrees to let them in and to get them an Uber.  When it turns out that the car is going to take 45 minutes to get there, he also agrees to dry the girls' clothes for them.

Increasingly, the two women become more flirtatious and start to discuss sexual topics.  Evan, more and more nervous, tries to avoid their obvious advances and steer the conversation elsewhere.  Eventually, when confronted with both of them naked and throwing themselves at him, he gives in.

The next morning he wakes up and thinks that the girls have gone.  Instead he finds them making a mess of his kitchen and defacing his wife's artwork.  At first they refused to leave, and inform him that they are both underage and will tell the police that he forced them.  Eventually, he has enough and calls the police himself.  The girls agree to leave and Evan takes them to where they say they live.

While Evan tries to work that evening, he hears noises in his house and, when he goes to investigate, is knocked unconscious.  When Evan comes to he is tied to his bed, and the girls have begun ransacking the house.  While Genesis goes through his wife's makeup and clothes, Bell puts on his daughter's close and forces herself on him while Genesis films it on his phone.  Eventually they put him in a chair with headphones on and begin to play a game where, if he refuses to answer or answers wrong, they turn up the static to deafening levels.

The game is interrupted by Karen's assistant Louis (Aaron Burns), who comes to pick up the artwork.  The girls lock Evan in a storage shed and greet Louis, claiming to be Evan's nieces.  He's willing to play along at first until he sees the damage done to one of Karen's sculptures and confronts them.  He tries to rescue Evan, but begins to have an asthma attack as he gets excited, only to find Genesis stole his inhaler.  They begin to play keep-a-way with it, with Louis slipping and hitting his head.  The girls refuse to call an ambulance, but instead let Louis die and fake messages from Evan's phone threatening to kill him.

The game finishes with the girls announcing their intention to kill him at dawn.  However, he may just have a way out - if he confesses everything to his wife and kids.

Let's just start with the entire premise here.  Evan is supposed to be my age - well, as of 2015, when this came out.  Very little of growing up still affects me except for one thing: when hot women start throwing themselves at me, I am either going to think it's a sick joke or that some guy with a crowbar is waiting in the bushes.  People may say how horrible bullying is, but at least it makes you wary of stuff that is too good to be true.  I don't care if it's raining; they are waiting outside for the car to come.  I also know that at a certain point a man is going to give into his baser instincts when confronted with something like this, and even if their isn't a horror movie plot waiting for me, I'm still not putting myself in that position.

There is also no real point to anything that happens.  If the point is don't cheat, then fine.  It is quite obvious that the way the girls push things forward that they do not wish for any of their victims to resist them.  If they're trying to teach a lesson then they are going the entire wrong way about it.  Also, even though Evan may be spineless and too full of himself, how are we supposed to sympathize with the girls' lessons on being a good family man if they are willing to watch a man die?

I really shouldn't get too deep into this because it is pretty obviously not a good movie, nor should I have expected it to be.  The only reason I was even interested is Eli Roth, as I am one of the few people who (or at least will admit it) genuinely like most of his movies.  This is definitely the worst of them.  The only enjoyable part is Keanu Reeves's acting.  That "free pizza" speech is hilariously bad writing as it is, but when Reeves doubles down and tries to be truly dramatic?  That's why I say he has to know what he is doing by this point.

Lorenza Izzo is pretty good in this, even though it seems obvious that Roth is going to start doing the Rob Zombie thing and casting his wife in everything going forward.  Ana de Armas is good as well, pretending to be 15 and disturbingly amping up the "Daddy's little girl" thing with Evan.

I have not seen the original movie, but I have to imagine it has to be better than this, even if it technically is exploitation trash.  I can definitely say I expected Knock Knock to be much worse than it was, but there is still no reason to waste time on it when there are better home invasion films out there.