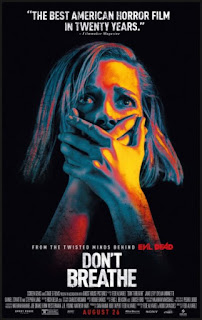 Many times the question comes up about what exactly a horror movie is.  It's easy to categorize something with ghosts, demons, other supernatural beings or supernaturally charged killers.  It's another thing when faced with fire-breathing monsters or realistic psychopaths.  Personally, if you are going to scare me even a little bit, you need to go with the latter.

Let's face it.  I'm never going to have to worry about fighting a werewolf or a vampire.  Demonic possession is not on my list of greatest fears either, nor am I expecting Godzilla to come stomping through the neighborhood any time soon.  But, while I also never plan to try to steal a bunch of cash from the home of a blind veteran, what does lie deep within someone's house is a bit frightening.  It becomes even more so when you're looking at an isolated area where someone can do about whatever they want.

Alex (Dylan Minnette) is the son of a man who owns a security company in Detroit, and he uses that fact to help his friends Money (Daniel Zovatto) and Rocky (Jane Levy) break into houses and steal goods.  He also has kind of an idea of what to do so that, if they get caught, they serve the minimum amount of time possible.  Money, however, is tired of having to fence goods and have Raul (Christian Zagia) take 40 percent of it.  Raul suggests to him a score that includes a large amount of cash.

Alex is at first reluctant, but Money convinces him as it will allow him and Rocky to get out of Detroit and start a new life together.  Eventually Alex relents, and they make the plans.  The person they intend to rob is a blinded war veteran (Stephen Lang) who received a large court settlement when his daughter was killed by a drunk driver.  The girl who was driving never served any jail time, and the Blind Man got paid off.

The plan begins to go awry at the beginning as the man has fortified his house more than they expected.  Rocky manages to get in and let in the others, and they begin to search.  Money goes upstairs and sets off a homemade concoction meant to keep the man asleep, but the gas doesn't work.  He eventually comes downstairs and, even though he at first looks harmless and confused, soon wrestles Money's gun from him and shoots him.  Rocky hides and does what she can to be silent.

Alex by this point was not too happy that Money brought a gun with him in the first place and left the scene, but returns when he hears the gunfire.  Unfortunately, the man padlocks the front door shut and boards up the bathroom window, making conventional escape impossible.  Alex and Rocky decide to make for storm cellar so they can get out another way, but are pursued by the Blind Man who still has the gun on him.  What they discover in the cellar is that the man at some point was able to kidnap the girl who killed his daughter and is keeping her confined.  Alex and Rocky try to rescue her, only to be confronted by the man when they finally get the storm cellar door open.  He accidentally kills the girl, and his motive changes from pure vengeance to capturing Rocky to take per place.

This is director Fede Alvarez's second feature-length film, the first being the reboot of The Evil Dead.  Again, he has Sam Raimi and Rob Tapert, who were responsible for the origin Evil Dead films, backing him.  Where Raimi usually goes for outrageous (if gory) humor, Alvarez gets a bit more brutal than most horror directors do these days.  However, while there are some disturbing scenes, he does movie violence the way I like - a few set scenes that are memorable and start to go over the top, but largely depending on atmosphere and build-up to make them effective.

Atmosphere is one thing Don't Breathe has.  The empty neighborhoods of Detroit have a feel of isolation to them as it is, but here we have this loan man with a lighted house is a sea of darkness.  It should be a symbol of hope of a neighborhood coming back, but instead his place is even more of a black hole than the rest of the neighborhood.  The fact that he chooses to live that way should be a red flag to the burglars, but the promise of the money (and, for Rocky, true escape from a horrible family life for her and her sister) is just too tempting.

As a horror film I think this is one of the most jarring in a while, and that is because it's based enough in reality that you can imagine this happening.  Into the mix we also have a large, violent dog that the Blind Man uses for tracking and security, leading to a number of scenes that (intentionally) recall Cujo and make the idea of escape even more unlikely.  It is this sense of having tried everything only to wind up back in the same place, again and again, and be possibly facing your own death in the end, no matter what the antagonist promises.

If there is a major flaw, it is not in the logic of how a blind veteran somehow kidnaps a rich guy's daughter, holds her captive and gets away with it, but in having to design someone for us to root for.  The three are thieves, after all, and they are trying to steal the only money a wounded veteran has to live on.  Although we see Alex go home to get into his father's things, Rocky's home life is the only one we are shown in any detail.  In fact, she is the only one of the three given any real motive other than making a big score.  Neither Dylan Minnette nor Daniel Zovatto are annoying (although I could see the latter's character getting that way if he wasn't killed off so early), but they are one-dimensional.  Without the broken home story, and the kidnapping plot, the story would be much more ambiguous and a bit more tense, as no one in the group would have "plot armor."

When it comes down to it, Jane Levy and Stephen Lang are the only two that really matter, and both of them play their roles wonderfully.  The Blind Man is in no way helpless, but Alvarez and Lang don't make him magical, either.  His advantage is knowing his house and its surroundings.  Of course, that's also why he has his dog, because it's an added aid to him if he has to leave what he is familiar with.  Lang manages to get the viewer to sympathize with what the man has been through, but also to properly despise him for what he has become.  Meanwhile, Rocky's a fighter, but also a realistic one.  There is only so much she can do before she is worn down.

I do see that a sequel is planned for this.  I am kind of hoping Alvarez moves on to other projects rather than doing that.  There is nothing wrong with letting a movie stand on its own, and no real reason to force what will most likely be an inferior sequel.