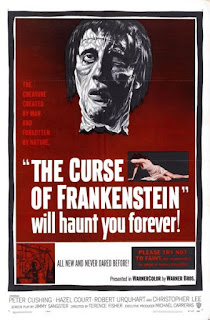 Universal ran the set of creatures into the ground.  Surprisingly, in the late 1950s, the British studio Hammer began to revisit them, and with an amazing amount of success.  Largely the films were in color, significantly more violent and benefited from a superb Gothic atmosphere.  They were low-budget, to be sure, but one thing that British cinema (and television) has always been good at is overcoming budgetary constraints with superior storytelling.

Of course, the Hammer versions of these monsters started going the repetitive route as they wore out their welcome as well, becoming jokes or just plain unimaginative over about the same time period as Universal did.  And, though they initially had to do anything to avoid copyright violations, eventually they even reached a deal with Universal.  Hammer became the most successful British movie studio of its time - and it all starts right here.

Yes, Hammer had been around since the 1930s, producing films of various quality.  Still, it was The Curse of Frankenstein that started their golden age.

Victor Frankenstein (Peter Cushing) is coming up on the last hour of his life and calls for a priest (Alex Gallier) to whom he wishes to tell his story.  He hopes that the priest's veracity will have some sway and maybe save him from the guillotine.

As a young boy (Melvyn Hayes), Baron Frankenstein loses his mother to illness and becomes the sole surviving heir to the family.  He agrees to keep funding his aunt (Noel Hood) and her daughter Elizabeth (Sally Walsh).  What he is really interested in, though, is knowledge.  He hires himself a tutor by the name of Paul Krempe (Robert Urquhart) so that he may learn as much about science as possible.

Together Paul and Victor begin experimenting with bringing dead animals back to life.  After that is successful, Victor decides to assemble a human being, thus bringing life to something that, technically, was manufactured.  Paul initially goes along with it, but decides to abandon the project as Victor's methods become more and more questionable.  Things are brought to a head by the return of Elizabeth (Hazel Court) after the death of her mother.  It turns out that, in return for his support, the aunt agreed to an arranged marriage between Victor and Elizabeth.  This doesn't go over too well with his maid Justine (Valerie Gaunt), with whom he has been having an affair and providing false hope of marriage.  Paul believes the young woman to be in danger so, even though he no longer helps Victor with his experiments, he stays to make sure Elizabeth is protected.

The time comes that the creature needs a brain, and Victor decides to use that of the noted Prof. Bernstein (Paul Hardtmuth).  The main complication is that the professor is at the time still using it, so Victor arranges an accident and agrees to have the body interred in the family vault - where it makes it rather easy to steal the brain.  Paul confronts Victor and breaks the jar containing the brain, thus damaging it in hopes that Frankenstein will abandon his project.  The hopes are in vain, as Victor puts the brain the body anyway and attempts to bring it to life.  He at first thinks he has failed, but a chance lightning strike adds the right amount of electricity to bring his creature (Christopher Lee) to life.

The creature immediately tries to kill Frankenstein, but is knocked unconscious by Paul.  When it escapes and murders a boy and his grandfather, Paul shoots and kills it.  Believing that Elizabeth is now safe, he leaves, but Frankenstein digs it up and resurrects it.  Dangerous as ever, it is kept chained in an anteroom to the laboratory.  When Justine, angered by the upcoming marriage, threatens to go to the authorities, she is locked in with the creature and killed.

Returning for the couple's wedding, Paul is shocked to see the creature is still alive and, when it escapes again, decides to go to the village authorities.  Meanwhile, the Baron attempts to rescue Elizabeth from the creature, with disastrous results.

I am assuming for many reasons that this was supposed to be a one-off movie, loosely based on Mary Shelley's book.  The Baron is back to being named Victor instead of Henry, and there is no loping hunchbacked assistant - rather, a real scientist, with real regrets for helping.  The story largely comes full circle at the end, but, alas, a number of sequels were made.

Peter Cushing brings even more menace to Victor Frankenstein than Colin Clive brought to Henry.  The manic quality is still there, but the older Frankenstein had some lines he would not cross.  This Baron doesn't even think of the consequences.  He is without a moral compass, and he won't let anyone get in the way.  He is even willing to risk his own life to meet his goals.  Cushing was great at playing everything from a kindly old man to fascist admiral that would blow up entire planets, so he inhabits this role with great aplomb.

Paul Krempe ends up being the voice of reason, and Robert Urquhart does the part justice by playing a man fully aware of his own hand in what has occurred.  His arguments come not from a higher ground, but from recognizing that both he and Victor took the wrong path.  Hazel Court's version of Elizabeth is, on the other hand, naive and optimistic - so much so that she literally stumbles into danger.

Christopher Lee's performance of the monster, though the makeup is quite different (though effective in its own way - the two different colored eyes were a nice touch), is nowhere near as good as Boris Karloff's.  While the killing is the acting out of a mentally deficient man who does not know his own strength or how to properly behave, there is none of the curiosity present.  It is merely a damaged brain rather than a criminal one, so there is no questioning about how circumstances can shape a character.

While the creature is definitely dangerous, the movie takes pains to make sure the viewer knows that the Baron himself was the true monster.  Without him the creature would never have had its poor semblance of life, and no one would ever have been hurt.  Instead, he insists on constantly placing the blame on Paul for damaging the brain in the first place.  It shows a powerful shift from the 1930s where this story was treated as the fantasy that Mary Shelley intended (despite just having the barest of connections with her book) to the 1950s when the result of scientific endeavors, which a number of people were starting to question the moral implications of, was a bit more widely known.

This was far from director Terence Fisher's first movie, but this is the one that got him name recognition, particularly within the horror community.  The choice to film it in color was brilliant, and it was surprisingly bloody for a time when the Hays Code was still largely followed.  It is rather tame now, but like most classic horror it doesn't necessarily need to go overboard to be effective.  Fisher's skill behind the camera helped cement him as the most successful director in Hammer's line-up, and his series of horror films from this point on include many that are considered classics.

While it is not up to par of the original two Universal movies, The Curse of Frankenstein does a great job updating the story and reviving it after a little over a quarter century.