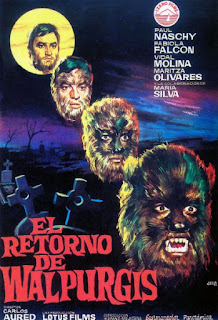 This is the seventh of Paul Naschy's films featuring Count Waldemar Daninsky, a Polish noble who is afflicted with a curse that makes him turn into a wolf man every full moon.  Rather than running as a straight series, each movie is a standalone picture, often with completely different time periods and origin stories.  Though this may seem like a sequel to La noche de Walpurgis and share a few off-hand plot points, the two have nothing to do with each other other than the main character's name.

For those who are unaware, Paul Naschy was often referred to as the "Spanish Lon Chaney".  I never know exactly which Lon Chaney they are referring to, but I think he spans both, since Junior made Larry Talbot and the Wolf Man his most famous character, while Senior was a genius at early film makeup.

Either way, his werewolf movies are his most famous outside of Spain, and he still remains largely an undiscovered talent - even though he should be up there with Dario Argento, even if he doesn't necessarily direct on a regular basis.

In the 15th century Inquisitor Ireneus Daninsky (Paul Naschy) goes head-to-head with the last remaining male member of the Bathory clan, defeating him in battle.  Daninsky's forces then raid the castle of Elizabeth Bathory (Maria Silva) while she is in the middle of a Satanic ritual meant to ward them off.  Her followers are hanged and she is burned at the stake, but not before cursing Daninsky's family line, stating that one day one of Daninsky's descendants will kill one of hers and a curse shall be upon him forever.

In the late 19th century Waldemar Daninsky has been brought up by his servants Boris and Malitza (Ana Farra) after his parents died at a young age.  He still maintains his family's castle and lands, and the respect of the local villagers.  This changes when one day he is hunting a wolf and, after shooting it, finds the body of a local Gypsy.  The clan spurns his attempts to make good with them, and take the body back.  Realizing this is the moment they have been waiting for, the clan's witch (Elsa Zabala) performs a ritual in which Satan rises and has sex with the girl Ilona (Inés Morales), thus choosing her as the one to pass the curse onto Daninsky.

Playing the victim of an attack, Ilona is taken into Daninsky's home and soon becomes his lover.  However, on Walpurgisnacht, she uses the skull of a wolf combined with her blood to give Daninsky a mark that curses him to turn every future full moon.  She flees to go back to her clan, but runs into an escaped maniac that has taken refuge on Daninsky's land.

The local police inspector Roulka (Mariano Vidal Molina) is none too pleased when villagers start hiding rather than helping him go after the maniac.  Things get worse when it starts to appear that the maniac may also be a werewolf, as the attacks turn from axe murders into what appear to be wild animal attacks.

Meanwhile, Daninsky becomes involved with someone who truly loves him - Kinga Wilowa (Fabiola Falcón), the eldest daughter of mining engineer Laszlo (Eduardo Calvo).  He is also desired by her younger sister Maria (Maritza Olivares), but their blind mother seems to have suspicions that something may be wrong with Waldemar - suspicions her daughters and father quickly dismiss.

Maria's jealousies lead her to write a letter to Waldemar claiming to be Kinga, luring him to the place he usually meets his lover.  She is attacked by the maniac, who is stabbed by Daninsky and runs off.  Unfortunately, it also happens to be the full moon and, though she is successful in her seduction, he transforms and kills her.

Laszlo becomes distraught, quite sure that it was the maniac that killed her, and vows revenge.  Daninsky starts to realize what he is, while Boris and Malitza do what they can to keep it secret.  Finally they feel they have to warn Kinga, and they give her a way to free Waldemar - a silver cross plunged into his heart by the one who loves him most.

After the maniac's rotting body is found, the villagers quickly realize that Daninsky is the werewolf, and turn against Roulka, Boris and Malitza in order to find him.  While everyone else may be too late to save his life, Kinga may be the only one left who can save his soul.

Carlos Aured is the director this time around, and he seems quite adept to making an action film.  The fight at the beginning might seem laughable until you realize that this is about how mano-e-mano fights on horseback often went - clumsily swinging at each other until you can knock the other person off and properly go at him.  I also particularly like a scene where the corpses of a dead traveling troop are blinded to prevent them from becoming werewolves.  It's filmed during the magic hour, with most of the light coming from the flaming torches, and is quite striking.  Makes some of the day-for-night filming seen in other parts of the movie that much more frustrating.

Another thing I like about Naschy films is even though there is some sleaze and a bit of silliness (having a mutt stand in for a wolf doesn't work any way you look at it) is that they do follow a nice plot structure.  If you are used to other continental European horror film makers going all over the place with a very thin plot to string a bunch of images together, then Naschy may feel a bit too conventional at times, but it's one of the things I like.  We're doing Gothic horror here, and he really appreciates the style, and largely seems to get directors that appreciate it as well.

The werewolf makeup is great as always, and this is a nice gory mess in a number of places.  The blood is that bright red you get from many '70s movies, but the makeup work throughout is great.  Werewolves are animalistic, so it makes no sense to have him strangling people like in the old Universal films.

Paul Naschy as usual inhabits the role well, and he made for a rather believable physical hero and ladies' man.  Fabiola Falcón is not a traditional beauty, but has a sharp, determined edge about her which makes her quite fascinating, at least in the role of Kinga.  The role is not just that of a screamer, but a determined woman who does not flinch from having to do what she can to save the man she loves.

Like in most movies of this type, everyone else plays their part as a cog in the plot machine.  Mariano Vidal Molina stands out a bit as the frustrated Roulka, but even that character is the typical blind skeptic being confronted by the fact the superstitions of the villagers was real.

For U.S. viewers, most likely you will find this under the title Curse of the Devil, which is basically the uncut version and comes with the Spanish language option on the DVD.  It has also shown up on VHS under the title The Black Harvest of Countess Dracula and its literal translation, The Return of Walpurgis.