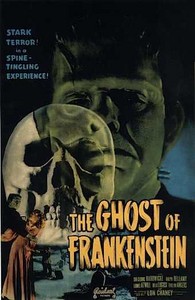 In my opinion, the story of Frankenstein's Monster had a satisfying ending in Son of Frankenstein.  Wolfgang von Frankenstein dispatches the evil Ygor by shooting him multiple times, and comes in swinging to knock the monster into a sulfur pit and save his son.  He then high-tails it out of Frankenstein (the town), leaving the villagers to do what they will with his castle.

However, I can think of many, many film series that had great endings, but still keep popping up repeatedly.  When there's money to be made there will be resurrections, sly escapes and about everything else under the sun.  At some point, though, logic does have to prevail, and eventually even series that need the least bit of continuity start to crumble under their own weight.

We start back in the town of Frankenstein, where the townspeople are quite upset that no one wants anything to do with their village.  Although the Frankensteins are gone, they still blame everything on the old family, and decide (rather than changing the name of the town back to, say, Goldstadt) that the best course of action is to dynamite the castle.

Since Wolfgang took off, Ygor (Bela Lugosi) has somehow recovered from his wounds, and still haunts the grounds of the castle.  Not wanting his home to be blown up he attacks the villagers, and eventually seeks refuge in the watchtower.  Over the years the sulfur pit in which the monster (Lon Chaney, Jr.) fell has hardened over, and the dynamite ends up breaking the sulfur open - revealing that the monster didn't die, but survived in a state of suspended animation.  Ygor finishes freeing his friend and decides the best course of action, since the monster's brain is still damaged, is to seek out Wolfgang's brother Ludwig (Cedric Hardwicke), who runs an insane asylum in the town of Visaria.

Ludwig von Frankenstein has spent the years hiding his past and his connection with the town of Frankenstein, even from his daughter, Elsa (Evelyn Ankers).  With his assistants Dr. Kettering (Barton Yarborough) and Dr. Bohmer (Lionel Atwill), Ludwig has found ways of successfully removing a brain, operating on it and returning it to the skull of a patient, thus curing them of mental illness.  His success has made him widely known and praised by the inhabitants of Visaria.

Things change, however, with the arrival of Ygor and the monster.  While Ygor inquires about Frankenstein's location, the monster notices a small girl (Janet Ann Gallow) lose her ball to some bullies.  When he approaches everyone except the girl runs.  When she asks him to get her ball, he picks her up in his arms and starts walking to the top of the building.  This, naturally, alarms the town people, and two villagers are killed when they try to retrieve the girl.  With Ygor's prodding, he agrees to come down when promised nothing will happen to him - a promise quickly broken as he is put in chains and taken to face trial for the murders.  Ludwig, being the expert on such matters, is requested and prepares to go to the inquest.  However, he is visited by Ygor, who informs him of who the man is, and blackmails Frankenstein into helping return the monster to strength.

Elsa overhears and starts to grow concerned.  Ludwig tries to reassure her, but she starts to learn about her past when she discovers the diaries of her uncle and grandfather in her father's study.  Meanwhile, upon seeing his creator's son, the monster flies into a rage when Ludwig states he does not know him.  Frankenstein is saved by Ygor, who lures the monster away and heads for the asylum.  Unfortunately, the monster is getting more and more out of Ygor's control, and kills Dr. Kettering.

Ludwig decides that the creature must be destroyed once and for all, and asks for Bohmer's assistance in dissecting him, as disassembling the creature is the only way he can think of killing it.  Bohmer refuses, so Ludwig decides to go about it himself.  It is then that he is visited by the ghost of his father (Hardwicke), who encourages him to instead correct the problem with the brain by removing it and replacing it with another's.  Frankenstein decides to use Dr. Kettering's brain, but Ygor insists that his brain be used.  In order to secure that his brain be transferred so that he can live forever in the monster's body, he promises Bohmer the fame and fortune that the latter craves.

After the creature has not been captured after its escape from incarceration, the city's lead prosecutor, Erick Ernst (Ralph Bellamy) starts to suspect that Ygor and the creature are being given refuge at Frankenstein's estate.  A search proves fruitless, largely because the monster has decided to go visit the girl and bring her back to have her brain removed and put into his body.  Elsa is able to get the girl from him and keep her safe, but her disappearance and destruction of the home rile up the townspeople so that they decide to take matters in their own hands and attack the estate.

Bohmer, anxious for his time in the spotlight, manages to transfer Ygor's brain into the monster's body, but unforeseen complications set in, exacerbated by the villagers storming the property.

The Ghost of Frankenstein is definitely the worst of the movies that focus solely on the monster.  The lower budget may have some effect, but the script is a mess and was an obvious cash grab.  Boris Karloff was playing in Arsenic and Old Lace on Broadway, and wisely steered clear of reprising his role for this film.  In addition to Ygor and the monster being alive for no other reason than pushing a new ludicrous plot through the mill, two of the men killed in Son of Frankenstein are inexplicably alive and still in their burgher positions at the beginning of this film.  Yes, they were bit players, but their deaths formed a major part of the plot of the previous film.

That said, this movie is still quite enjoyable and doesn't quite go down the rabbit hole of silliness that some of the other Universal monster productions were beginning to.  Lon Chaney, Jr., had just made his major contribution to the studio's creature canon with The Wolf Man, and manages to do a good job here as the monster.  He's once again a bit more human, and a given much more to do than just lumber around.  Bela Lugosi is still wonderful as Ygor, and largely carries the film.

Where Lionel Atwill stole many of the scenes he was in as Inspector Krogh in Son of Frankenstein, Dr. Bohmer is more of a bland creation led only by ambition.  There is some backstory about a mistake he made while Ludwig was his pupil, but it is never explored after it is brought up.  It doesn't help that his characer quite resembles that of Sir Cedric Hardwicke's throughout, sometimes making it confusing to the eye on who is who.  As for Hardwicke, he's solid, but bland.  There is none of the obsession of Colin Clive's portrayal of Henry, nor the nervous curiosity of Basil Rathbone playing Wolf.  He's just there because they had to make up another Frankenstein son to further things along.

Evelyn Ankers is quite beautiful as Elsa, and her character is given much more to do than her father.  Too bad she has no chemistry with Ralph Bellamy, as their supposed budding romance is nothing but a point on which to hang whether or not Eric Ernst will be impartial in his dealings with Ludwig.  Even that part falls flat.

The Ghost of Frankenstein is quite watchable and enjoyable for what it is, but it largely stands as an example of why one should quit while ahead.