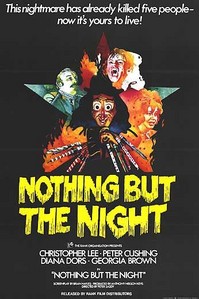 As Hammer was beginning to wind down, the budgets becoming less and less and the movies often being sad shadows of what they were in their heyday, Christopher Lee decided to use his name and his success to start producing his own movies.  Charlemagne Pictures Ltd. would of course have the benefit of having Lee as an actor, and it also had Peter Cushing in its first movie as well.  It was an easy transition for Hammer fans.

In the end, despite planning a trilogy of movies based on John Blackburn novels, Nothing But the Night was the only film produced by Charlemagne Films.  It seemed that working in film production took so much time that he found himself turning down acting roles, something that he rarely did even if he did constantly complain about the roles he was given.

A number of trustees for the Van Traylen Orphanage keep turning up dead, including founder Helen Van Traylen (Beatrice Kane).  All the killings have the appearance of possible homicide, but they also seem to fit the definition of suicide as well.  The investigation becomes even stranger when a bus carrying children from the orphanage crashes.

The children survive, but one girl, Mary Valley (Gwyneth Strong) is held back for observation by Dr. Haynes (Keith Barron).  Although the bus did not catch fire, her nightmares involve flames and someone named Vincent.  Over the objections of his boss Sir Mark Ashley (Peter Cushing), Haynes decides to hypnotize Mary.  Things become even more complicated when the girl's real mother, Anna Harb (Diana Dors) shows up to claim her.

A former prostitute who did time for murder, Anna goes to the press about not being allowed access to her daughter, and gets a sympathetic ear in Joan Foster (Georgia Brown), who begins investigating the case and working closely with Dr. Haynes.  They agree to arrange a visit with Mary, which results in Haynes's death, apparently by Anna's hand.

Mary is quickly sent back to the orphanage for safety, but Anna pursues her.  Since this also involves the case of the trustees, Colonel Bingham (Christopher Lee), an old colleague of Ashley's, becomes involved in the investigation of Haynes's death, bringing Ashley into the fold and going to the remote island where the orphanage is located to intercept Anna before she can get to Mary.  Meanwhile, a boat load of trustees blows up, and one of the children on the island goes missing.

Despite the efforts of the police Anna eludes capture.  However, Joan gets access to the recordings that Haynes made of Mary, and convinces Ashley that there is more going on than just a crazed mother trying to get to her child.  It appears that the orphanage itself may have some other sinister purpose.

This movie is decent, if not spectacular, and that is not really the reserved praise you want to hear for your first production.  While not lurid with sex and violence like the Hammer films, it still contains a horror element that becomes apparent toward the end.  While everyone is good in their roles, it seems like those in charge spend more time blustering rather than being effective, which might explain how a chubby woman in jeans and a bright red jacket (not to mention bright red hair) manages to evade everyone on a small island, especially when her woodsman skills appear to be crawling about and getting a bit dirty.

While it builds into a horror film at the end (and almost out of nowhere), the majority of the movie is focused on the manhunt for Anna, even above searching for whoever it is that is killing the orphanage's trustees.  It's even more frustrating that there is no clear lead.  Christopher Lee gets top billing and does his usual workmanlike performance, but Colonel Bingham feels like an auxiliary character throughout.  Haynes is set up to be the lead, and in a Psycho-like twist is knocked off early, but unlike Psycho we don't get the protagonist replaced by a great antagonist.

Peter Cushing is on hand to do the scientist role, while Georgia Brown does the typical investigative reporter schtick.  Gwyneth Strong gives the best performance of all as the troubled Mary, but really should have been given much more to do considering how important her character really is in the scheme of things.

While his excuse was that he couldn't devote time both to acting and producing, the truth is that Nothing But the Night was nothing but an okay movie, and nothing going for it to set it above some of the more mediocre films Cushing and Lee had starred in from time to time.