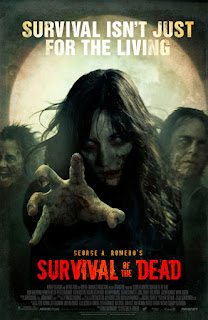 I have been curious for a long time about where George Romero intended to take his zombie films.  Although The Night of the Living Dead was an largely an attempt to get a low-budget horror film in the theaters and make some money, it was one of the first (and still one of the few) to have an African-American actor as the lead.  Later episodes further explored consumerism, corporate greed and the stability of democracy when there is a need to feel secure.

What I was most interested in, however, was something first really touched on with Bub in Day of the Dead, and explored even further with Big Daddy in Land of the Dead.  The zombies in the Romero films, rather than simply being ravenous decaying flesh, always seemed to retain some core memory of their previous life.  What they didn't remember they seemed to have the capacity to relearn.  The end of Land of the Dead certainly left some questions about whether these were just shambling monsters to be used for target practice or if at some point humans were going to have to learn to live with them on equal terms.

Then, as good as it was, Diary of the Dead happened, putting us back to the beginning of the whole zombie plague rather than pushing forward.  I remember interviews with Romero saying that Land of the Dead was sort of a compromise as he did not have the money at the time to complete the series the way he wanted.  Although Road of the Dead is supposed to come out next year, based on a script by Romero (he had already lined someone up to direct prior to his death), it is unknown what his final endgame was or even if there was any.

That endgame certainly wasn't Survival of the Dead.  This movie has received a lot of hatred, some of it warranted, but most of it not.  Although still early on (probably shortly before the events of Dawn of the Dead, as society hasn't completely fallen apart yet) some answers to questions left unanswered by the previous movies are explored, but it still doesn't take us too far into anything new.

On Plum Island, a small community off the coast of Delaware, there is a feud going on between the O'Flynns and the Muldoons.  The head of the O'Flynns (Kenneth Welsh) is trying to put down the dead as they rise, while Muldoon (Richard Fitzpatrick) means to keep them around, thinking that they can possibly be cured.  Barring that, he hopes to at least get them to eat something other than people.  The feud comes to a head, and O'Flynn is forced to leave the island.

We get a little bit of backstory on Sarge (Alan Van Sprang), the man who robbed the kids in Diary of the Dead.  It turns out their video was posted online, and Sarge became a bit of an internet sensation.  He and his band, now consisting of Kenny (Eric Woolfe), Francisco (Stefano DiMatteo) and Tomboy (Athena Karkanis), became stickup men after going AWOL, and eventually come across an armored truck.  When the men in control of the truck become hostile they are put down, but the soldiers are joined by a boy (Devon Bostick).  Kenny comes across a video by O'Flynn advertising Plum Island as a safe place to go.

Sarge reluctantly agrees to head to the pier indicated in the video, and his fears are realized when O'Flynn and compatriots set upon them and try to steal the content of the truck (which turns out to be over a million in cash, with the boy having the key).  Francisco decides to risk both the the thieves and a mass of underwater zombies to retrieve a ferry so they can drive the truck on and head out to the island.  While the rest of the robbers are killed, O'Flynn barely makes it to the boat and is pulled on by Tomboy.

The group makes it to the island only to find that others who were sent on before them (O'Flynn actually still sent people on their way after robbing them) were quickly murdered by Muldoon.  The group itself is shot at by members of the rival family, with Kenny being killed and Sarge wounded.  O'Flynn's hopes for a family reunion begin to fade when he sees his daughter Jane (Kathleen Munroe) ride by on her horse - and quite dead.

Muldoon's attempts to get the zombies to eat animals has so far failed, so he orders his men to capture Jane as she seems to be a bit more intelligent than the others.  He also manages to capture Tomboy shortly after she assists Francisco, who received a bite, in ending things.  The boy goes out looking for the two, but comes across Jane's identical twin Janet, who helps Sarge.  She is not too happy that her father is back, having been the loan member of her family supporting his exile.  The fear is that he and Muldoon will just take things as far as they can go and kill each other.  Sarge, angry about Kenny's death and disgusted by the treatment those seeking refuge on the island received, sides with O'Flynn.

The O'Flynns decide to take care of things once and for all, but are confronted by the Muldoons, who threaten to kill Tomboy unless the group lays down its arms.  They agree to do so, but the guns are returned by Janet, thus evening out the odds.  Muldoon, on his part, agrees to let everyone go if O'Flynn will just admit that he was wrong, as he puts Jane in a corral with her horse to see if she will eat it.  With everything at stake, it comes down to whether old rivalries can be forgotten.

The one thing I have to agree with that detracts much from this film were the CGI effects.  Practical effects in many cases would have been better, and better looking.  Wherever CGI is used it is horrible in this film, and looks like Romero hired a college intern to work on it during the weekends.  The death with the fire extinguisher should have been great, but ended up looking like something out of Looney Tunes.  The heads on the pikes were supposed to be shocking, but instead looked like a scene from a video game from around 2002.

I think that this heavily distracted from the story itself.  While it is nowhere near as exciting as the first movie or as sharp as the second and third, it is still a pretty good watch.  There are elements of Westerns as well as hints that, with the barriers removed and even with a common enemy, petty rivalries just get worse.  The last scene of the movie drives it home in a not-so-subtle manner.

Sarge was an interesting character that popped up in Diary of the Dead, and it is nice to see Alan Van Sprang back as a sort of swaggering antihero.  It is Kenneth Welsh as the stubborn, determined O'Flynn that will be remembered.  His character does not evolve much, and nor does anyone else's (Romero zombie films usually use stock figures for the human parts anyway), but he nails every scene he is in.

Survival of the Dead is in no way a horrible film, but it should not have been the last movie that George Romero directed.  Whatever he was aiming at for a finale we may never get to see or get to know.  There is hope, as his son is preparing to carry on the films as well but, alas, we're heading back into the past again.  I really want to see how far the dead come back, and just hope Warm Bodies isn't the template.