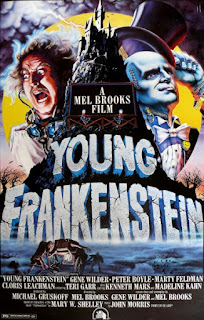 Let's face it.  The Universal monster movies got to the point where they were no longer even trying to be frightening.  There was some effort to hold things together, usually by Lon Chaney, Jr., but there was a reason it took Abbott and Costello Meets Frankenstein to even temporarily revive any interest in the series.  It took about a decade, and for a British studio known for pushing limits, to put them back on the map.

But even Hammer couldn't keep things going forever.  Frankenstein and the Monster from Hell was not a horrible film, but Hammer was on shaky ground and was no longer a force to be reckoned with.  Horror was changing, particularly with The Exorcist coming out a year later and completely disrupting horror cinema.  Not to mention the cheap exploitation flicks which seemed to have much more imagination.

There was also a man named Mel Brooks who was quickly redefining comedy.  Earlier in 1974 his movie Blazing Saddles proved a popular, if extremely controversial, send-up of Westerns, with Gene Wilder as one of the leads.  Turns out Gene Wilder had something in mind to follow it up: a black and white parody of the Frankenstein films, done in the style of the Universal films of the 1930s.  It became one of the most beloved comedies of all time.

Frederick Frankenstein (Wilder) is the grandson of Victor Frankenstein.  A successful doctor and professor, he has done what he can to avoid being associated with the Baron's reanimation experiments.  It comes to light that he is the last remaining member of the family, and the Transylvanian castle where his grandfather did his work is now his.

Upon arriving in Transylvania, he is met by his humpbacked assistant Igor (Marty Feldman) and the woman who will be helping him in his lab, Inga (Terri Garr).  The other inhabitant of the castle is Frau Blücher (Cloris Leachman), who may keep the place up but has a rather disturbing demeanor.

The first night in the castle Frederick hears the sound of music coming through the walls and, with Inga's help, opens the secret passage that leads into his grandfather's laboratory.  Upon reading his memoirs, he too begins to believe that he can create a creature from dead matter.  A perfect candidate comes up after a recent hanging, and then it just remains to get a brain.  Frankenstein has one all picked out by Igor, as expected, drops the good one and grabs the abnormal one.

The fateful night comes, and at first it appears that the experiment is a failure.  However, during dinner, the group hears the groaning of the monster (Peter Boyle) and come down to find it alive.  After it nearly kills Frankenstein after being startled by fire, it is sedated.  However, Frau Blücher decides to set it free, and it escapes the castle and begins roaming the countryside.  The villagers, led by the one-armed, one-eyed Inspector Kemp (Kenneth Mars), as they already believes that all Frankenstein is going to do is trouble them with another monster.  A disastrous introduction of the creature to the scientific community doesn't help.

Meanwhile, as Frankenstein finally gives into his feelings for Inga, Frau Blücher brings word that his fiance Elizabeth (Madeline Kahn) is due to arrive from America at any moment.  She does and begins to settle in, only to be kidnapped by the monster and spirited away to a cave where, despite her initial displeasure, he proceeds to have his way with her.  He is soon lured back to the castle by Frankenstein playing the monster's favorite music, and it turns out that the Baron has found a way to cure the abnormal brain by transferring some of his brain into the monster.

There are elements in here from the original Frankenstein (Wilder's overacting, the graveyard scene, the little girl encountered by the monster), Bride of Frankenstein (the scene with the blind man, Elizabeth's choice of hairdo) and Son of Frankenstein (the dart scene and Kemp being a director parody of Inspector Krogh).  It seems that largely The Ghost of Frankenstein and Frankenstein Meets the Wolf Man are largely ignored, even though it is mentioned by a villager that they have had to deal with this problem five times prior.

The success of the movie is that, parody or not, it comes up with its own story in a way that it fits in with the Universal films.  Yes, we are suddenly in Transylvania instead of the towns of Frankenstein or Visaria, but the original films were horrible with consistent storytelling.  Locations and plot points changed from movie to movie, even with the classic three.  The fact is, if this story had popped up and been done straight in the original run, it may not have fallen into such disregard.

Along with Willie Wonka, this is one of Gene Wilder's most memorable lead roles.  He goes into full ham mode numerous times, overacting in a manner that would have been typical at the time but, even in the 1970s, seemed archaic.  It's not really stated if his father is Ludwig or Wolfgang (I'm guessing the latter, since he washed his hands of the whole thing and had an American wife).  We are back to using the name Victor instead of Henry for his grandfather.

Terri Garr with her silly German accent is perfect as the lab assistant who likes the occasional role in the hay (literally) and has a crush on Frankenstein from the outset.  She is the complete opposite of Madeline Kahn's Elizabeth, who is high strung, high maintenance and, at least at the outset, quite frigid.

The one that I find myself quoting lines from most of the time is Marty Feldman.  He switches from Dwight Frye to Boris Karloff to Groucho Marx quite often.  He was the best parody of this type of stock character until Terry Pratchett made the Igors (and Igorinas) an entire race unto themselves in the Discworld novels.  Cloris Leachman delightfully inhabits the castle's caretaker, being both devious and devoted at the same time.  She largely resurrected aspects of this character for her role as the grandmother on Malcolm in the Middle.

And, finally, there is Peter Boyle as the monster.  Mel Brooks doesn't make the mistake so many Frankenstein movies did in putting the creature on the back burner.  We get an hilarious song-and-dance number, great send-ups of some of the best scenes from the first two movies and more than a little naughtiness. Watching him grab at invisible butterflies as Frau Blücher plays the violin is one of the many little joys that pop up.

As you have noticed I have gone out of my way not to spoil any of the major jokes, no matter if you may have heard them time and time again through other sources.  While I am quite sure most people reading this review have seen the movie, and can practically act it out scene by scene, I prefer that if you haven't then you discover it for yourself.  It is not a gag-a-second, laugh out loud parody like Airplane! or even Blazing Saddles.  While the movie that preceded it was intentionally confrontational in its humor, Young Frankenstein relies more on subtlety and a love for its source material.

Word of warning, though.  This was the 1970s, so there is, as can be expected, that one scene that would not fly today.  The initial hook up between the monster and Elizabeth does not start off as consensual, and only starts to be so due to certain aspects of the creature.  I understand where Mel Brooks (or Wilder, if this was one of his) was going with it, and how it came across as funny at the time.  Current audiences that clutch their pearls and try to get a film banned because a man even looks at a woman with some level of interest when she may not be interested back are not going to like a scene that finds humor in what is essentially an act of rape.  To be honest, I forgot what led up to the scene, and recalled it rather differently.  It is much more disturbing than it should be.

While times do change, the rest of the movie holds up rather well, perhaps because it is filmed as a throwback to a type of film making that was 40 years in the past when this came out.  It doesn't stick out as a '70s film as much as some other comedies from the time do.  Instead, it feels like the original series finally has some real closure by the time the credits role.