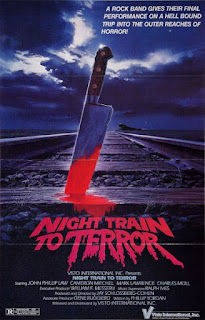 Poor God, and poor Satan.  Maybe it was God's plan all along to get back at the devil by sticking him in a car just a little bit down a train from a horrible '80s band and a bunch of failed applicants for the Solid Gold dancers.  Or, just maybe, stumbling upon this movie and getting through to the end is a strange form of penance in itself.

Night Train to Terror, from what I gather, is famous largely for how horrible it is.  Nominally an anthology film, it is basically three (two released, one unreleased until 1992) chewed up and regurgitated into nonsensical form.  It's the very incoherence of the movie, combined with a liberal dose of decent practical effects, that draws people to it.  It is, almost literally, watching a train wreck.

As a train barrels through the night and a bunch of people party to horribly to one of the worst bands ever to perform on Earth or elsewhere, God (Ferdy Mayne) and Satan (Tony Giorgio) sit at the back waiting for the train to crash while they judge certain cases of who should, and should not, go to hell.  The cases are presented by the Conductor (Gabriel Whitehouse), who also provides narration here and there.

First up is "The Case of Harry Billings".  Billings (John Phillip Law) is a womanizing salesman who decides to settle down.  After partying too hard, he drives off a bridge with his new bride (Eva Hesse).  She dies, but he wakes up strapped to a chair in an asylum.  Dr. Fargo (Sharon Ratcliffe) and Dr. Brewer (Arthur H. Braham) have a plan for Harry: drug him, send him out to drug beautiful women, and bring them back to the asylum where the orderly Otto (Richard Moll) tortures and rapes them before cutting them up to sell their body parts on the black market.  Eventually Harry breaks free from their grip and takes revenge.

Next up is "The Case of Gretta Connors".  Gretta (Meredith Haze) is an aspiring musician and actress who works under a carnival.  After being promised the world by sinister pornography maven George Youngmeyer (J. Martin Sellers), she makes stag films when not performing in a seedy bar.  Glenn (Rick Barnes), a young college student, becomes obsessed with Gretta and sets off to find her.  They fall in love, but Youngmeyer refuses to let her go.  To get rid of Glenn he makes him part of a death club run by his accomplice, Contessa Pacelli (Toni Covington).  His efforts to kill Glenn continually fail.

Finally, we have "The Case of Claire Hansen".  A police lieutenant (Cameron Mitchell) is contacted by a holocaust survivor (Marc Lawrence) who is sure that a young man named Olivier (Robert Bristol) that he saw on television is a former Nazi official.  The lieutenant is skeptical, but Weiss goes to investigate and is found dead with 666 tattooed on his chest.  Claire (Faith Clift) is a devoted Catholic nurse who is married to James (Moll again), a popular atheist professor.  While Olivier tries to convert James, Claire receives a mission from the church to destroy the demon once and for all.

The reason this anthology movie doesn't work, where many others do, is that these were all movies in their own right.  The first segment was originally called Scream Your Head Off, and at the time Night Train to Terror was made, it was filmed, but still in an unfinished state.  It did get released in 1992 as Marilyn Alive and Behind Bars.  It is by far the worst segment here, but the real movie doesn't have that bad of a reputation.  It also has a completely different plot.  Presented as it is here we just have random rape and torture scenes, almost all involving violence against women.  The original plot is sleazy (the women are being kidnapped to sell to Arab sheikhs), but at least works in a typical exploitation fashion.

The second segment is better, but it ended up being a finished movie called The Dark Side to Love.  Both the first and second were directed by John Carr, but the second has more of that kitchen-sink '80s horror feel.  It's still a mess as it's presented here, and sounds much more interesting in its original form.

What's strange is the movie that is hated most in its original form is the only segment I truly enjoyed here, despite still having many, many problems.  I think it's because, even in edited form, it still had a coherent plot, and a bunch of garbage may have been removed.  It's Cataclysm, from 1980, and its disco-era setting is heavily anachronistic for a mid-'80s film.  It's definitely a rip-off of The Omen and some other Satanic movies, but has some decent effects going for it and a wonderful performance as the demon from Robert Bristol to liven things up.

The wraparound, if they got rid of the band (which I'm sure could be one of the house bands of hell) is actually pretty decent.  The acting talents of Ferdy Mayne and Tony Giorgio are wasted on what we are presented.

If you want to see how truly horrible a mess a movie can be, then I guess this might pique your curiosity.  However, I would suggest giving this a past and just seeking out the original films.  They may be mediocre, but they can't be as bad as this.