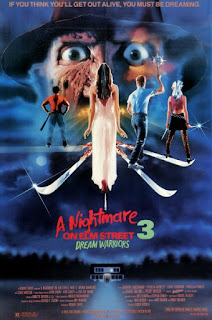 I believe I had seen A Nightmare on Elm Street prior to this sequel, but I could be wrong.  It was 30 years ago, after all.  I know I didn't see the second film until sometime in the '90s, although I had seen all the others by that time.  No loss, since I never really liked the original sequel.  This was the true one, giving an explanation to what happens at the end of the first movie and continuing the original story.

My memories of it are quite fond, as I saw it at a get-together with a number of other kids that I had gone to summer camp with.  I forget what else we watched that night (Lucas, maybe, although I can't remember a single thing about that movie), but Dream Warriors convinced me that this series was not just another slasher film.  It really didn't get this good again until Wes Craven's New Nightmare.  Still, it had me hooked, and I think it is a prime example of why '80s horror was so much fun.

Kristen (Patricia Arquette) is having nightmares, something her mother (Brooke Bundy) is having trouble dealing with.  When one of the nightmares leads to an apparent suicide attempt, Kristen is signed into a mental institution under the care of doctors Neil Gordon (Craig Wasson) and Elizabeth Simms (Priscilla Pointer).  Gordon is confused on what is causing what he considers a shared psychotic episode, while Simms is sure it has to do with guilt associated to sexual thoughts.

The newest member of the staff has some different thoughts on the matter.  Nancy Thompson (Heather Langenkamp) was the sole survivor of Freddy Krueger's (Robert Englund) first run through a bunch of teenagers, and soon recognizes that he has returned.  She herself is using an experimental drug to make sure she doesn't dream, but that doesn't keep Kristen from suddenly pulling her in to one of hers in order to help her fight Freddy.  After another one of the kids, Phillip (Bradley Gregg) dies in an apparent sleepwalking accident and aspiring actress Jennifer (Penelope Sudrow) is found with her head smashed into a television, Nancy holds a session and reveals that she knows who is haunting them in their dreams.

Dr. Gordon himself is at first skeptical, but his encounters with a mysterious nun (Nan Martin) that works at the hospital and explains to him who Freddy is and how he must be vanquished by being buried on hallowed ground.  In order to fight Freddy Nancy and Neil decide to use Kristen's gift, and she transports the remaining kids - recovering addict Taryn (Jennifer Rubin), wheelchair bound Will (Ira Heiden), short-fused Kincaid (Ken Sagoes) and mute Joey (Rodney Eastman) - into her dream.  They are soon set upon by Freddy, and Joey is captured, remaining in a comatose state.  The failure of the session leads to both Gordon and Nancy being banned from the hospital, leaving Elizabeth in charge.  Kristen rebels against this and, for her efforts, is forcibly sedated.

When Dr. Gordon informs Nancy about what the nun has told him, she seeks out her estranged father (John Saxon), now working as a security guard, in order to find out where they hid Freddy's remains.  He at first refuses, but Dr. Gordon has Mr. Thompson take him to the site, in the middle of a junkyard, after first stopping to grab a cross and some holy water.  Taryn is successful in making a call out to Dr. Gordon, alerting Nancy to Kristen's situation.  While Nancy attempts to gather the rest of the group together to fight Freddy and save Kristen, Dr. Gordon fights him on a more visceral level in order to get rid of him forever.

Of course Freddy didn't really go away, as three more sequels (Wes Craven's New Nightmare was something totally different) and a fight with Jason Voorhees should make quite clear.  Even though this would have been a fitting end, there was too much money to be made at the time, and the story continuing on was inevitable.

What makes part three so unique is that the dream sequences are quite imaginative.  Yes, there are some great one-liners, the best of them ad-libbed by Englund, but director Chuck Russell and his special effects crew went as far as they could with the small budget they were given.  Freddy turns himself into a snake, a robotic television monster, a giant puppet master and even a stop-motion, Ray Harryhausen-inspired skeleton.

I love '80s horror just for this reason.  CGI effects were occasionally creeping in, but they were expensive and typically looked horrible.  Prior to, and even during, Jurassic Park special effects artists were pushing the limits of what they could do with animatronics, makeup effects, stop-motion and just about everything else.  While maybe not as over-the-top as the Evil Dead films, this is still an amazingly good-looking monster movie from the time.

Where I am let down is that the final battle, which I remembered so fondly from when I originally saw it, is so short now.  Both Taryn and Will, the two strongest fighters of the group, are dispatched rather easily.  I have a feeling that budget came into play, as I know that Russell and scriptwriter Frank Darabont wanted to do much more with the movie.

The other problem I have is Heather Langenkamp.  She was great in the first one, and also pretty darn good in the seventh.  I have no idea what was going on here.  Her line readings are flat, and she often appears a bit spaced-out.  Even the kids doing bit parts are better than her in this case.  She should really be the star, but that ends up falling to Craig Wasson, a guy who unfortunately gets mistaken all the time for Bill Maher.  He's not outstanding, but he doesn't seem like he's reading off a cue card as much.

This is Patricia Arquette's first movie, and Kristen is one of the more memorable characters from the series.  While she doesn't get in too many licks against Freddy himself, she gives the hospital staff a run for the money.  Lawrence Fishburne shows up in a bit part as Max, the hospital orderly.  Jennifer Rubin ended up dying one of the more memorable deaths in the series, and went on to have a starring role in Bad Dreams and Delusion.

The other kids are pretty good, but are mainly there for Freddy to kill.  They are still more interesting than the bland kids Jason usually knocks off, but they are just as stereotypical in their roles.

The other start, of course, is Robert Englund as Freddy Krueger.  He is one of the all-time screen monsters, and I have never been able to picture anyone in the role except him.  Englund gives the role personality rather than just being another faceless, quiet killer.  This is the first of the movies to really feature the one-liners that would later get overused, but they are still fresh here.

From this point on the series would continue to get creative with the dream visuals, at least throughout the following two movies, even if the stories weren't as interesting.  This is where the original story line should have ended, truly, but Freddy Krueger at this point was a bigger star than the guy playing him.