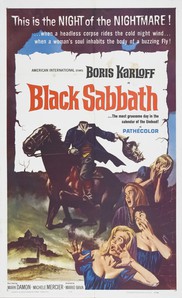 Mario Bava and American International pretty much worked for the few movies he did for them in the 1960s.  His gothic horror films were pretty much in line with the Edgar Allen Poe adaptations Roger Corman was doing for them, only Bava had access to real European castles.  He also went quite wild when he began to film in color.

It also helps that one of the legends of horror, Boris Karloff, was signed to American International at the time.  In his mid '70s when Black Sabbath was filmed, he none-the-less was still both a striking presence in one of the segments, as well as a delightfully ghoulish host for the proceedings.

We begin with Karloff's floating face on a black background welcoming us to the proceedings, and he quickly introduces us to the first tale - "A Drop of Water", based on a tale by Ivan (not Anton) Chekhov.  Helen (Jacqueline Pierreux) is a nurse tasked with preparing the body of deceased medium for burial.  The body has been lying in state for a number of days, as the woman's maid (Milly Monti) has been afraid to enter the room.  She warns Helen not to touch any of the medium's things, as everything has been cursed.  Of course Helen disobeys, taking a ring from the corpse's hand.  She soon learns a lesson about greed and respecting the dead.

Next up is "The Telephone".  Rosy (Michèle Mercier) lives alone in an upscale apartment.  She begins receiving calls from a mysterious man who claims to be watching her every move.  He threatens her, saying that he wants her body, and that she will be dead come dawn.  It turns out the voice is from a man named Frank (Milo Quesada), who is thought to have been executed after Rosy turned him in for an unnamed crime.  She calls Frank's other ex-lover, Mary (Lidia Alfonsi), to help her.  Mary thinks Rosy is crazy, but soon finds out that ghosts can be lethal.

The last segment, "The Wurdalak", is based on an 1839 novella by Leon Tolstoy.  Vladimir D'Urfe (Mark Damon) is traveling to the town of Yasi, and comes across a horse with a decapitated corpse slumped across the saddle.  He removes the dagger from the corpse and brings the horse to an estate, where he meets brothers Gregor (Glauco Onorato) and Peter (Massimo Righi), and their sisters Sdenka (Susy Anderson) and Maria (Rika Dialyna), as well as Gregor's son.  They are awaiting the return of their father Gorca (Karloff), who went out to kill a Turkish bandit named Alibek.

It turns out the corpse was Alibek's, and the bandit was rumored to be a Wurdalak - a type of vampire that only feeds on the blood of ones he truly loves.  Gorca warned his children that if returned any later than five days, on the dot, that he should be turned away, as he would have become a Wurdalak himself.  Of course his family doesn't listen, and upon his return he begins to prey upon them.  Vladimir plans to escape with Sdenka, but even she may beyond his power to save.

Most horror anthologies have at least one weak link, and in this case it's "The Telephone", despite its significance as one of the seeds of the giallo genre as well as one of the first Italian horror films to be in color.  I guess that it might be a bit different in the original Italian version, but here, though brilliantly filmed like everything Mario Bava does, it just comes across as an uneven potboiler.  When you have a very understated, and what is considered one of the best, of Bava's horror stories proceeding it and a story with Boris Karloff playing a memorable vampire role afterward, it just seems to sit there.

"A Drop of Water" and "The Wurdalak" are about equal in quality, although I understand the love for the former.  Both really show off Bava's use of color to set mood, and they are both quite ingenious in frightening the viewer without a tone of jump scares or an over-reliance on in-your-face violence.  They are certainly much more restrained than most of Bava's work as well.

This remains one of Bava's most well-known works, as well as a late-career success for Karloff and a shining moment in horror history.  If only all the anthologies could be up to this standard.