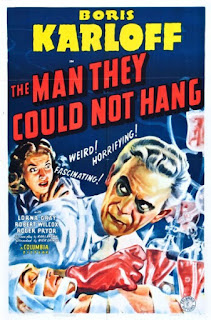 Frankenstein suddenly changed Boris Karloff's acting career quite late in his life.  Still, he only played the role that made him famous three times.  His large stature, sunken eyes and amazing way of chewing scenery often made him much more suited for the guy creating monsters rather than the monster himself.  Even his other famous monster role, The Mummy, saw him largely in a major acting role.

Thus we find Karloff doing a series of films for Columbia for b-movie director Nick Grinde, each featuring him in a mad scientist role.  The first of these was The Man They Could Not Hang.

Dr. Henry Savaard (Karloff) is about to experiment with a young medical student (Stanley Brown).  He has developed an artificial heart that can be used to restore circulation after the body dies, thus allowing doctors to perform major surgery while the body is technically dead.  Savaard and his assistant Lang (Byron Foulger) use a combination of gasses to end the man's life, and then go about bringing him back.

Problem his, his girlfriend Betty (Ann Doran) panics and runs to the police.  Reporter "Scoop" Foley (Robert Wilcox) overhears her tale and makes it to the Savaard home in time to meet Henryk's daughter Janet (Lorna Gray), and tries to contact the doctor before the police arrive.  They break down the door of his lab, but not before Savaard is able to hand the device off to Lang for safe keeping.  Despite his protestations that he can bring the boy back to life, the police arrest him on the advice of the Dr. Stoddard, the city coroner (Joe De Stefani).

Put on trial for murder, he is sentenced to hang, but not before he gives a speech berating the jury for killing him and thus preventing him from giving the world a way to save many lives.  He warns Judge Bowman (Charles Trowbridge), District Attorney Drake (Roger Pryor) and Betty that they will all regret the decision.

The sentence is carried out, but Lang manages to the one who takes charge of the doctor's body, bringing him back to the lab and reviving him.  After three months, Foley gets suspicious as six members of the jury have been reported as suicides - all by hanging.  An attempt to reach the others reveals that they have all, save the two that argued for his Savaard's release, been invited by Judge Bowman to the doctor's home.  Foley contacts Janet to find out if she knows anything about it, which she denies.

Foley informs Police Lt. Shane (Don Beddoe) and the two go to investigate.  Initially turned away, they manage to follow the judge in when he arrives.  Bowman himself is as confused as the others, and rather upset that someone has called the meeting under his name.  They soon find out who their host is, and what he has in store: the place cards at the dinner table contain information the time each one will die, starting with the Judge.

The first two deaths go as planned, but Betty manages to escape hers.  However, when Janet arrives and confronts her father, he decides that he must abandon his game and get rid of everyone all at once.

I love the premise on this as well as the intricate device meant to simulate the working of the heart.   Boris Karloff, as expected, is excellent as Savaard, and his speeches before the movie display the range of his acting, even with heavy-handed dialogue.

The main problem with the movie is that it seems as if there was more planned, and someone showed up and put a halt to the proceedings.  The trial portion goes on longer than needed, and when we get to the meat of the story - a booby-trapped house with intricate deaths planned for everyone - we only get through two before the usual plot device of a woman not staying put.  Just as soon as things start to move, the whole film is over.

Despite the one-note performances of the other actors, this sudden truncation of the third act neuters what could have been one of the best Karloff movies ever.  Instead, we are left just staring at the screen, thinking, "Is that it?"  Sadly, yes, that is.