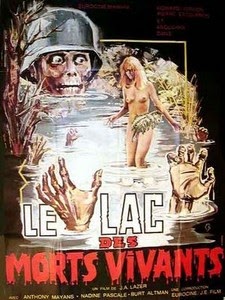 After one woman disappears and another is found dead in a small French town the mayor (Howard Vernon) and population begin to suspect that those responsible may be zombies rising from the local "Lake of the Damned".  The lake itself has a reputation stretching back to medieval times, but at this point it appears the recent bodies of a group of German soldiers that were killed by resistance fighters and thrown in to avoid repercussions of more retreating German troops.

A reporter named Katia (Marcia Sharif) arrives to get the story, and the mayor tells her the rest.  It turns out one of the soldiers had saved a local woman when she got caught outside during a bombardment and was wounded.  During the occupation of the town they fell in love and had a daughter, Helena (Anouchka).  The mother died in childbirth, and her father was killed in the resistance ambush.

After a team of basketball players is killed the local police finally agree to send investigators to the town.  After they are also killed by the zombies the town decides to take matters into their own hands

At first the ambush fails an the zombies are immune to bullets.  Katia suggests burning them and Helena agrees to use her father (who has regained much of his memory and visited her) to lure the rest of the zombies to the mill for a last stand.

What can be said for a movie where the director, Jean Rollin, known for making a number of adult films as well as a series about nude vampires, completely disowns it?  There are many of his trademarks.  Lots of nudity (almost every woman is shown full-frontal in a rather voyeuristic manner) and a bit of a strange, surrealistic pace permeate this story.  It is rather straightforward for Rollin, however, with little of the long passages of nothing that mark many of his films.

In truth, the movie, despite many goofs, horrible makeup and terrible dubbing, is much better than Jesus Franco's (who wrote the script for and was originally supposed to direct this one) Oasis of the Zombies.  Much of the movie makes little sense (it supposedly takes place 10 years after the war, which would put it in the 1950s, but everyone wears styles from the 1970s), but it is still well-paced and nicely filmed.  If Rollin hadn't treated the script with such contempt and practically directed this as an afterthought then much of what is wrong with it could have been remedied and this would be regarded better than it is.