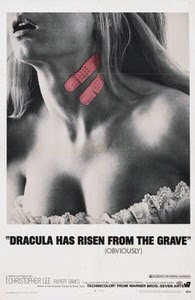 A year after Count Dracula (Christopher Lee) is killed by freezing him in the rivers of the mountain where he keeps his castle, the people of the surrounding town still feel his presence.  In fact, they will not even attend the local church because the shadow of the castle falls upon it.  Monsignor Ernest Mueller (Rupert Davies) intends to do something about this and forces the local priest (Ewan Hooper) to guide him to the castle so he can perform the rite of exorcism.

The Monsignor succeeds, but the priest takes a drunken fall and the ice in which Dracula is encased shatters.  The priest's blood falls into the Count's mouth and... well, you can pretty much guess from the title.  Dracula quickly makes a Renfield out of the priest, but is not too happy about the cross on his doorstep and decides to take revenge against the Monsignor.

Thinking that evil has finally been banished from the town the Monsignor returns to his own house with his sister Anna (Marion Mathie) and her daughter Maria (Veronica Carlson).  Maria is being courted by a young student named Paul (Barry Andrews) who does not impress the Monsignor at all due to the fact that he is an atheist.

The priest leads Dracula to the Monsignor, and the count quickly goes about his business, possessing the barmaid Zena (Barbara Ewing) and using her to bring Maria to him.  After that fails, Zena is dispatched and Dracula decides to take care of things himself, drinking from Maria in her own house.  The second attempt is thwarted by the Monsignor, but he is stopped in his pursuit of Dracula by the priest.  Now his only hope of saving Maria lies in trusting Paul, despite his lack of faith.

This is definitely one of the best entries in Hammer's series of Dracular films.  Christopher lee is menacing, the makeup work (Lee's bloodshot eyes, the infected bites) quite advanced for the time period and there is quite a bit of general humor as well as action here.  Yes, it is a typical Dracula story, in some ways mirroring Stoker's original (the priest is Renfield, Zena is Lucy, etc.).  Only problem I have is the moralistic Christian bent, but that was to be expected.

My wife and I had a discussion about who was the best Dracula.  I think we both came to the agreement that it is Lee over Lugosi (although I wanted to argue Gary Oldman did a hell of a job), and this particular film goes a long way to sealing that argument.  And I should mention that this is the first movie ever to be rated by the MPAA.  It's rating?  G.  And it makes the limp PG-13 stuff made these days look like Disney films.