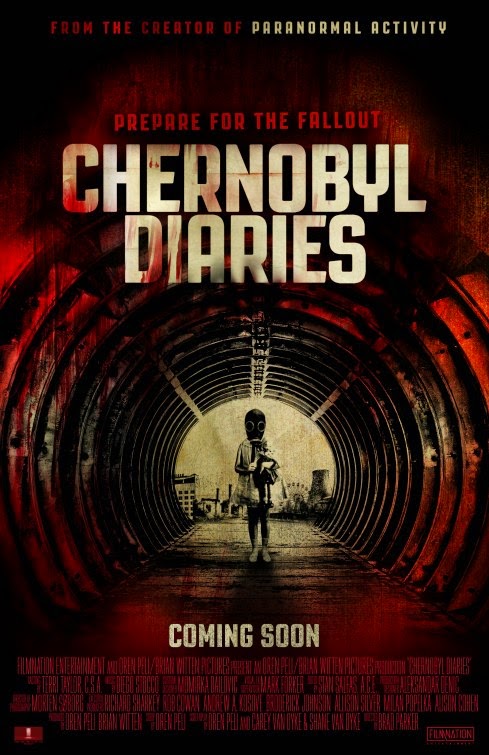 Chris (Jesse McCartney) is traveling around Europe with his girlfriend Natalie (Olivia Taylor Dudley) and her friend Amanda (Devin Kelley).  They make their way to Kiev to visit Chris's brother Paul (Jonathan Sadowski), and expatriate who is going to accompany them to Moscow.  After a night on the town, Paul pitches an idea for a detour: he has found an extreme tourism guide named Uri (Dimitri Diatchenko) who will take them to the abandoned town of Pripyat near the Chernobyl nuclear power plant.

At first Chris is reluctant, but he is overruled, and the tour commences with tour others, Australian tourist Michael (Nathan Phillips) and his girlfriend Zoe (Ingrid Bolsø Berdal).  At first it appears that their tour will be cut short when the soldiers at the main checkpoint refuse to allow them through, citing "maintenance" work.  Uri, however, knows another way in, and they spend the day photographing before Uri's insistence that they leave before dark.  Only problem is, when they return to the van, it appears something has destroyed the distributor cap and they are stranded.  As night falls it becomes clear that Pripyat is not empty, as Uri is dragged away by something and Chris, who went out to find out what happened, returns wounded.

After spending a night in the van Natalie stays behind with Chris as the rest head off down the road to get help at the checkpoint.  On the way they find a parking lot full of abandoned cars as well as a van the same type as Uri's.  Removing a distributor cap from it, they begin to head back but are set upon by wild dogs that throw them off the path, causing them to return again after dark.  However, when they return they find the van destroyed and Natalie and Chris missing - with a video on her phone of the two being dragged away.  What at first begins as an attempt to rescue their friends soon turns into a desperate attempt to escape whatever is inhabiting the ruins of Pripyat.

From what I remembered of the previews, and from what Oren Peli usually produces, I expected this to be another found footage film.  It is instead a traditional horror film.

It is also not as bad as you would think from its reputation.  There is truly nothing new as this type of film (and denouement) has been done many, many times over.  The performances are good for what they are given; at least for once you don't absolutely hate the characters, although one does get  more than a little frustrated.  The abandoned city is quite atmospheric and the final chase through a labyrinth of abandoned corridors and such is quite exciting.

By the time you reach that point, however, you are so frustrated because none of it needed to happen.  The next day they awaken early enough to have walked to the checkpoint, got some big guys with guns, driven a half hour to 45 minutes back in, rescued Chris and Natalie and driven back out all by a little after noon.  No second night, no cannibalistic mutants, no dead friends.  Most likely the worst would have been bribing their way out of jail time and not saying anything more than Uri died in an "animal attack."

But, no, at one point they turn back because they see wild dogs eating something in the road.  The perfect time to just go slightly around, but instead they panic and completely go off in another direction and get lost.

In the end, no matter how much atmosphere there is, despite the great decision never to directly show the creatures that are after them or anything good director Bradley Parker came up with, the whole thing is ruined by knowing that the characters had to have been written as morons in order to get killed.  It completely takes one out of the movie to where you end up think about the whole process of how it got made.  Then you start to think if the makers think that you are a moron as well.  And since everything else is such a linear, routine ride, by the end you just feel your time has been wasted.