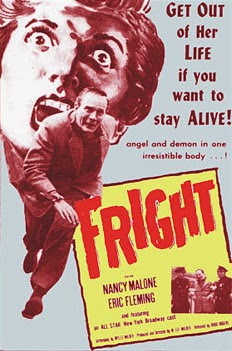 George Morley (Frank Marth) is a murderer running from police.  They corner him on a bridge from which he threatens to jump.  After all attempts to get him to turn himself in have been unsuccessful, psychiatrist Dr. James Hamilton (Eric Fleming) convinces the cops to let him have a go.  Using the power of suggestion he succeeds where they failed and becomes an instant celebrity.

Unfortunately, Morley wasn't the only one influenced by Hamilton that night.  Ann Summers (Nancy Malone), a wealthy British aristocrat, was also there. Somehow Hamilton's mesmerism has allowed a latent personality name Maria, who has previously been little more than a nuisance, to come out full force.  Maria is also the Baroness Maria, lover of the crown prince Rudolph of Austria, with whom she committed suicide in 1889.

Newspaperman Cullen (Dean Almquist) is anxious to get the story on Hamilton, but the doctor refuses to talk after being referred to as the "Park Avenue Svengali".  Attempting to remain in the office to catch the doctor off-guard, Cullen stumbles upon the tapes of Ann's therapy sessions and runs with the story.  The result is that Maria comes out full-force and leaves, but not before planting evidence that makes it look like Dr. Hamilton killed Ann.

In order to clear his name and bring Ann back into his life, Dr. Hamilton hatches a plan to use Morley to kill off Maria once and for all.

Despite its lurid poster, Fright has very little in the realmo of suspense or action.  Filmed on a shoestring, it is at least decently acted, and having the villain be either a non-existent personality (or a reincarnated soul that won't rest) is interesting.  This movie would have fit right in with the low-budget films of the 1940s that Bela Lugosi was apt to show up in, but I'm sure looked quite quaint and dated even by 1956. Not to mention I don't think anyone came within sniffing distance of a psychology textbook when writing the script.

Still, in the end, it's light, forgettable fluff.  Just not the stuff that horrors are made of.