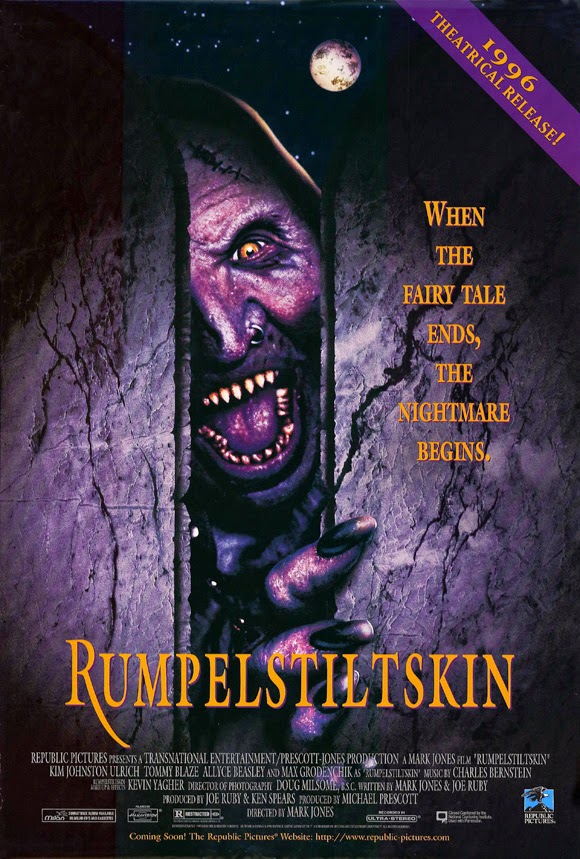 In the 1400s the evil little creature known as Rumpelstiltskin (Max Grodénchik) is making off with the first born son of the miller's daughter, pursued through the forest by angry villagers.  He reaches the cliffs overlooking the sea and taunts them, only to find that amongst them is a witch up to the challenge of banishing him - at least for awhile.  He is turned into stone and cast into the sea.

In 1990s Los Angeles, Russell (Max Grodénchik) is expecting his first child with his wife Shelley (Kim Johnston Ulrich), but his life comes to a tragic ending when he is killed by a carjacker.  On the advice of her friend Hildy (Allyce Beasley) she gets out of the house and visits a strange antique shop where, lo and behold, the stone is in current residence.  Despite the owner of the shop (who also happens to be a witch) advising against buying it, Shelley does anyway.  Wishing that her husband could get the chance to see his son and shedding a tear on the stone she sets Rumpelstiltskin free.  Her wish is fulfilled, but of course he wants payment: her baby Johnny (Brianna and Brittani Ferraro).

Hildy agrees to take Shelley in for a bit and suggests that they head up to the friend's mother's cabin, but ol' Rumpel shows up again for the baby, killing Hildy and a number of other people in the process in his pursuit.  Finding herself stranded on the side of the road, she is picked up by Max Bergman (Tommy Blaze), a chauvinist trash talk show host who is reluctant to get involved - especially after he finds out that she's telling the truth.  Together the two must find a way to save Johnny and banish Rumpelstiltskin.

It should be no surprise that this is directed by Mark Jones, the same person that brought us Leprechaun.  I have never seen any of the Leprechaun sequels because the original was one of the worst movies I had ever experienced, not even enjoyable on a camp level.  Being the same director (and writer) a number of the same bad decisions appear in this movie, most notably inappropriate use of slow motion during some killing and action scenes.  There is also the awful '90s trope of giving the titular monster too many one-liners, which is extremely unfortunate because if the Rumpelstiltskin character had been played in a more serious manner it would have been more effective.

Most frustrating, however, are the protagonists.  Shelley is held back by her inability to look up the word "chaff" in a dictionary, and at any point the characters (who all know who the monster is) could have said his name, which in legend at least went a long way toward doing the job of getting rid of him.  There is a lot of running around and a number of deaths that could be prevented by just following a centuries-old fairy tale. I guess this needs to be done to get a full movie (as Rumpelstiltskin is probably one of the easiest creatures to banish), but it just makes everyone seem in a permanent state of brain damage.

On the good side this is a much better film than Leprechaun and, not being bound to chasing people around a house, allows for a rather fun car chase and some other decent set pieces.  If Mark Jones just gave up his attempt to rip off Freddy it could have been quite a bit better.