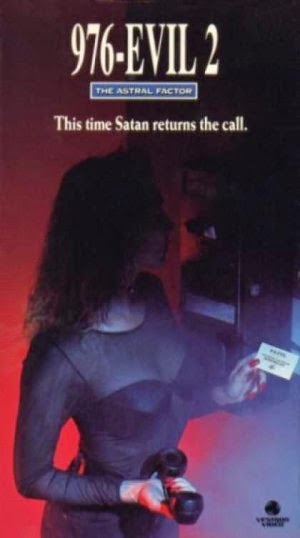 Spike (Patrick O'Bryan) has survived the events in the first movie, only to have everyone he loves die.  He has hit the road on his motorcycle, though he is still stalked by ringing phones and the person on the other end trying to give him his Horrorscope.  In a seedy bar in the desert he sees a newscast that the town of Slate River is being plagued by a serial killer who has just claimed his fifth victim.

The killer turns out to be Mr. Grubeck (René Assa), the dean of the local community college, who has been identified by a janitor (George "Buck" Flower) who witnessed the most recent murder.  While the community comes to grips with this, Robin (Debbie James), who used to work for Grubeck,  finds one of the cards for the Horrorscope service and starts seeing visions of the most recent murder as well as others that may take place.

Spike arrives in town and quickly takes a liking to Robin, as well as figures out that the Horrorscope service is behind everything.  While in jail Grubeck uses his one phone call to contact them and receives the power of astral projection and the ability to murder people while he sleeps.  He starts with the janitor and moves on to the prosecuting attorney before appearing to Robin and announcing his real intentions: he wishes to have her for himself.

Robin understandably has a different opinion about the relationship and, with the help of Spike, decides to put an end to Grubeck's murder spree once and for all.

Jim Wynorski abandons the revenge fantasy angle of the first movie to cash in on the Freddy Krueger craze.  The difference being that in 976-EVIL II the killer is able to murder people while he sleeps instead of the other way around.  This allows for some interesting set pieces - a rather exciting automobile sequence where Grubeck takes over the attorney's vehicle (to the tune of the Seeds' "Pushin' Too Hard"), and another where Robin's best friend Paula (Leslie Ryan) is sucked into It's a Wonderful Life - only to have the entire cast turn into zombies and attack her in the style of Night of the Living Dead.

Assa does a convincing job as the killer, O'Bryan does about as well as he did in the first one and Debbie James is decent eye candy as long as she isn't trying to deliver a line.  Wynorski as always straddles a fine line between originality and rip-off, sometimes making the sequel (he seems to almost always do sequels) better than the original.  Not so much here as so much of the weird feeling of the original is absent.  Also, the ending is quite abrupt and silly.