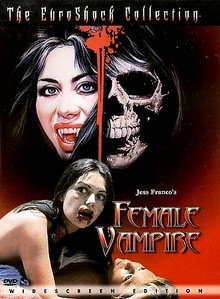 Countess Irina Karlstein (Lina Romay) is the last of her line.  A mute vampire, she has returned to the island of Madeira where her ancestral castle stands and, with her, has also returned her unique way of feeding: young men and women are found with bite marks on their genitals and to have died in the midst of orgasm, with men having the semen as well as the blood sucked from their bodies.

Anna (Anna Watican), a journalist, interviews Irina and soon becomes one of her victims.  Noticing a pattern, Dr. Roberts (Jesús Franco) tries to convince the authorities they have a vampire on their hands, but is rejected.  Dr. Orloff (Jean-Pierre Bouyxou), an adept of the occult, is more willing to listen, but believes that instead of being wiped out the Countess should be left alone.

Meanwhile, the Countess claims more victims, seeking to find a bit of the pleasure that her victims feel and ultimately failing.  Throughout she has been pursued by Baron Von Rathony (Jack Taylor), who believes he may be the answer to her problems.  In the end it becomes a question of whether she will be killed by Roberts, saved by the Baron or end the vampires' reign of terror in her own way.

There are supposedly quite a few versions of this movie around, and at least three intentional versions by Jesús Franco himself.  The one I viewed was slightly past what you would see as a softcore film on Cinemax.  For that reason I found it extremely lacking as a horror film.  Despite its horror elements (and a typically dreamlike atmosphere when Franco decides to pay attention to something other than Romay's body parts), the little plot there is seems nothing more than an excuse to string together various sex scenes, which often go on way too long and are not shot well.  Trying to follow the story through this just becomes tedious.

Despite having a reputation as being one of his best films, I found Female Vampire to be well-shot when dealing with the actual story elements, horrible as a sex film, and just generally tiresome throughout.