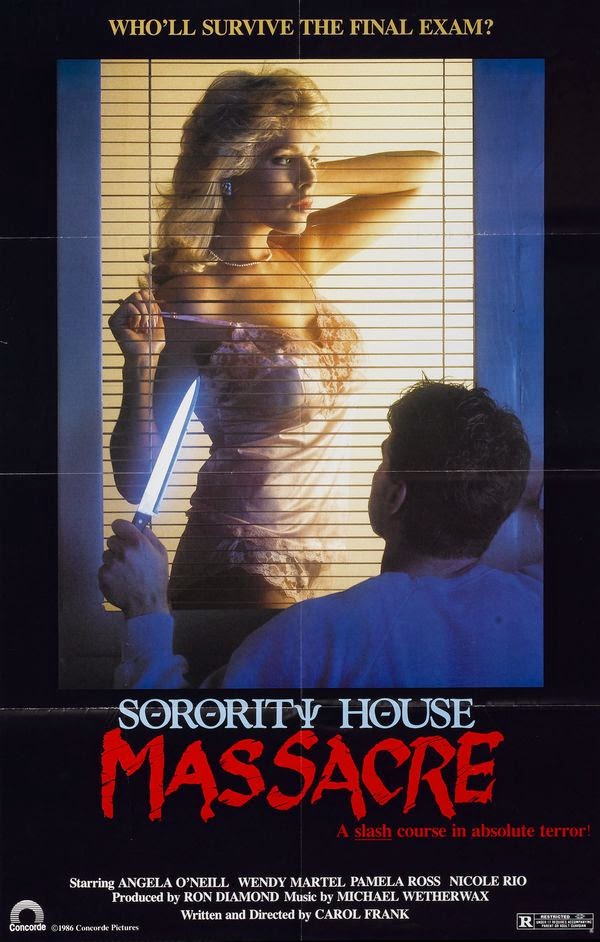 Beth (Angela O'Neill) returns to school after her aunt dies and her friends at a sorority house take her in over the Memorial Day weekend, hoping that she'll pledge once she gets a taste of Sorority life.  Almost everyone is gone, leaving Sara (Pamela Ross), Linda (Wendy Martel) and Tracy (Nicole Rio) to keep her company and plan for the upcoming Pow-Wow.  Of course their boyfriends are in tow as well.

As soon as Beth enters the house she begins to see visions and have bad dreams.  In them a man calls her "Laura" and is chasing her with a knife, trying to murder her.  It just so happens that her entering the house has also triggered Bobby Henkel (John C. Russell), a violent mental patient, to escape from his facility and return to the house.  It turns out that what is now the sorority house was where Bobby murdered his entire family - leaving only one person alive.  It seems he has returned to finish the job.

In some ways this is a mash-up of more well-known horror films.  The opening shot, and indeed the music (and a good portion of the plot) are practically copied and pasted from Halloween, while the attempt to make a more female-oriented and less voyeuristic sort of horror film with a female director is reminiscent of Slumber Party Massacre.  I also can't help but see a lot of Black Christmas in this.

Despite the mish-mash, director Carol Frank obviously tried to make the best movie she could.  The dream sequences are effective and truly creepy (yes, there's a bit of the Nightmare on Elm Street movies here as well), while she makes a great choice in not making Bobby some sort of masked maniac.

The leads are generally unknowns, the acting is mediocre, but the direction is fine.  While it may be fun to guess all the different slashers it has taken from, it is also disappointing that there wasn't more creativity involved.  Frank, who was also the writer, certainly seemed capable of it.