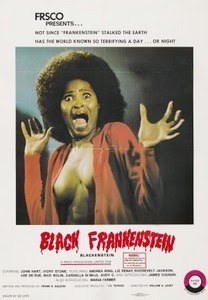 Dr. Winifred Walker (Ivory Stone) arrives in Los Angeles to be near her fiance Eddie (Joe De Sue) who has returned from Vietnam sans arms and legs.  She goes to her old professor Dr. Stein (John Hart), who is doing experiments in reattaching limbs.  After visiting Eddie the doctor agrees to help and moves him into his clinic in the darkest, stormiest part of L.A.

Using a combination of electricity and serum made from Eddie's DNA the initial results are a success.  However, Dr. Stein's assistant Malcolm (Roosevelt Jackson) has fallen in love with Winifred.  When his advances are spurned he switches the DNA serum with an RNA serum that has been known to cause regressive, animalistic behavior in other patients.

At first Eddie begins to develop a thick brow line.  His speech is then affected and he grows to a large size, begins to escape the facility and go on a killing spree around the neighborhood.  Winifred realizes the the monster is Eddie after he interrupts a rape attempt by Malcolm, but he is barely human any longer, and it is up to the police to find some way to stop him.

This was quite an obvious attempt to cash in on the Blacula movies, which melded old Universal horror with the blaxploitation genre that was popular at the time.  This movie was so awful that it probably saved us from sitting through Black Wolf Man or The Blummy.  Where Blacula benefited from a great lead performance, an interesting anti-hero in the title character and decent direction despite its budget, this has nothing going for it.  Yes, it's nice and bloody, but even that is handled incompetently. The fact that the only nudity occurs during rape scenes also shows an underlying string of nastiness by writer/producer Frank R. Saletri that makes this film even more unpalatable.

So, no, it is not one of those "so good it's bad" movies.  It's just boring, worthless and has nothing to recommend it, not even for those who like viewing something ironically.  It's a colossal failure on all fronts.