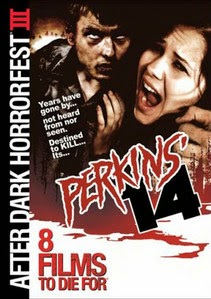 It's the 10th anniversary of the abduction of his son, the last of 14 children abducted in a short period of time, and officer Duane Hopper (Patrick O'Kane) is covering a shift for another officer.  He has already spent time off from his job due to a breakdown and drinking.  His wife Janine (Michaela Mihut) is having an affair and his daughter Daisy (Shayla Beesley) barely pays attention to him.

While making a round of the cells he runs into a man named Ronald Perkins (Richard Brake) who asks him to check if the judge has signed release papers for him.  During the conversation Perkins mentions he has a number of children that he has to take care of and casually drops a mention of Hopper's daughter - whom Hopper had not mentioned.  Hopper becomes suspicious that Perkins may have been the man who abducted his son Kyle, especially since Perkins is missing the finger that Kyle bit while struggling.

Despite the fact that the release orders do come through and that he is told to lay off of Perkins, Hopper goes forward anyway and has his fellow officer Hal (Dean Sansone) check out Perkins's house.  In doing so Hal gets killed while inadvertently letting out the people who have been kept in the basement.  Hopper drives Perkins back to the house to find out what happened to Hal and finds a number of video tapes confirming Perkins was the kidnapper, a crime he said he committed as revenge against the town forgetting the murder of his parents.  He kept the kids alive and video taped everything he did to them to mail to the parents so they would know that they should not have moved on.

Hopper kills Perkins and calls in Hal's murder, but is told it will have to wait as suddenly murders are occurring all through town.  It turns out that all 14 victims, including Kyle, are very much alive and have been turned into little more than cannibalistic savages, and as a last part of the revenge are ravaging the town.  Hopper must save his family and survive the onslaught.

The concept of Perkins' 14 is interesting, and it is refreshing that the kids that are attacking are not undead zombies.  Unfortunately, Craig Singer's directing leaves plenty to be desired.  Also this is another one of those movies filmed in Romania where they are trying to make it look like a small town in the United States.  A hint to burgeoning film makers: Eastern Europe looks nothing like the United States no matter how you dress it up.  Sure, it may be cheap to film there, but if you do then put the story there.  Stick with Canada as your U.S. substitute.

Also, try to make a film interesting throughout.  Nice second act once the kids get loose, but afterward it turns into a rote siege film.  The kids are not zombies, but by the time everyone is trapped in the police station they might as well be.  Despite all the buildup and back story there is absolutely no payoff.