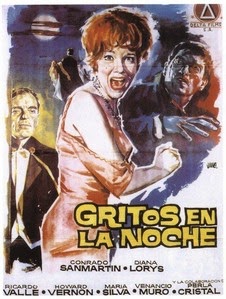 Inspector Edgar Tanner (Conrado San Martin) returns from vacation with a fiance in tow, one Wanda Bronsky (Diana Lorys), a famous ballerina.  He wishes no more than to get married and go on his honeymoon, but immediately upon his return he is called on to solve a case where a number of women have mysteriously disappeared.  Descriptions of the killer vary wildly and it is feared that the kidnapper may be murdering them.

An apt fear as the kidnapper is one Dr. Orloff (Howard Vernon), a retired scientist who last served as a prison doctor.  He arranged the fake death of his wife Arne (Perla Cristal) so that she could escape and also brought along the sadistic killer Morpho (Ricardo Valle).  Morpho is also thought by the authorities to be dead.  In truth, however, he has been operated on by Orlof and now does his bidding - killing women so that Orlof may experiment on grafting their skin to his severely disfigured daughter Melissa (also Diana Lorys).  After several failures he decides to see if he will have more success with living women.

As the kidnappings increase so does the pressure upon the police and the inspector to find the perpetrator.  Fearing for her fiance's career, Wanda decides to do some investigating herself and quickly runs into Orlof.  Of course, he becomes enamored with her likeness to Melissa and decides she is the perfect candidate for his final experiments.

If some of this sounds familiar it is because the plot is rather close to Eyes Without a Face.  So close, in fact, that I'm surprised director Jesús Franco didn't find himself on the receiving end of a lawsuit.  There are enough differences here, and the rather straightforward story may be strange to many who are more familiar with Franco's later work.  Except for a couple of scenes this is uncharacteristically well-paced, and the cinematography is superior to that of many of his films.

Despite it being an unabashed rip-off of a superior film, The Awful Dr. Orlof is still an effective thriller and an enjoyable watch..  It was also successful enough that both Vernon and Franco returned to the character for numerous sequels.