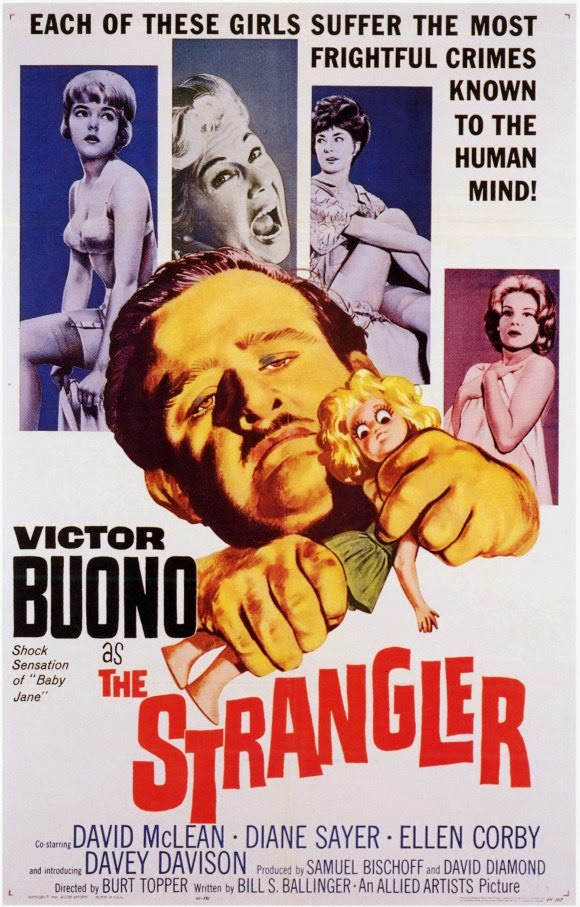 Leo Kroll (Victor Buono) is a mild-mannered lab analyst at a big-city hospital.  He lives in his mother's apartments, likes to play ring-toss games, enjoys dolls - and strangling nurses.  Each doll he wins represents a woman he kills, and we join him on victim number eight, Helen Lawson (Selette Cole).

Kroll is intelligent and has managed to remain under the radar.  However, his concentration on nurses has the police bringing in the staff of hospitals where the victims may have worked.  Despite Kroll's cool demeanor he gains the attention of Detective Posner (Michael Ryan) and homicide Lt. Frank Benson (David McLean), who sense something off about him.

Turns out things are quite off.  He is overweight and not particularly handsome, a fact his overbearing mother (Ellen Corby) drives home at any chance along with guilt for not seeing her on a regular basis.  He is anxious to be free of her, and his anger over the lost chance when he finds out her nurse, Clara (Jeanne Bates) saved her life.  Angry at being cheated, he visits Clara and makes his first mistakes after killing her.  This further puts him under the spotlight with the police, even after being cleared by a polygraph test.

After his mother does pass he wants nothing more than to be able to live his own life.  However, when he sees Posner speaking with Barbara (Diane Sayer), one of the girls at the ring-toss booth where he wins his dolls, he feels that it will be short-lived.  He murders Barbara in a desperate attempt to throw the cops off the trail, returning the next day to declare his love for her boss, Tally (Davey Davison).  Tally, stricken with grief over Barbara and completely blindsided by Leo's approach, spurns him, earning his rage.  The police are now aware that she will be his next victim and set up a way to catch him.

The Strangler, despite it's claims of crime and psychiatric research, is pure exploitation.  It was released shortly after the Boston Strangler's last victim was found, definitely owes quite a bit to Psycho and makes sure every woman that is murdered has the chance to strip down as far as they could in a mainstream American film of the time. Still, it is worth it for the cops not being dumb for once and the fact that Buono puts forth quite a frightening performance.  The contained rage at his mother (and at having a hard time with society at large) is always on his face even when he appears to be calm and detached.

As usual, though, the psychology is all over the place.  A man who is supposed to be a well-regarded psychiatrist (Russ Bender) declares that the killer must be a paranoid schizophrenic and, as usual, talking about split personalities.  I think by now everyone is aware that schizophrenia has nothing to do with multiple personalities, and even so Kroll never displays either schizophrenia (no voices, weird gestures, etc.), nor does he have any personality other than his own.  Rage issues, possible sociopathy, but nothing even approaching schizophrenia.  I know I'm going on about it, but the movie claimed to be researched - and in this case it appears the research only extended to other Hollywood movies that use the same trope.

So, ignore the supposed "research" that went into this, and enjoy what is otherwise a well-put-together exploitation film with a fine performance at its center.